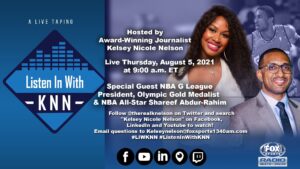 Nelson and Abdur-Rahim spoke about the NBA G League’s continued growth and his role within the organization throughout the episode. “As President of the G League, I oversee both the business and the basketball operations, and the overall strategy and vision of how we move forward. Our core principle of when we started as a league was being a place for people to grow and develop,” said Abdur-Rahim.

Prior to his current role, Abdur-Rahim had many roles that helped to qualify him for hs current position leading the G League. He said, “all of these experiences I think helped mold me and grow me to being in my current position.” Some of these roles include former Director of Player Personnel for the Sacramento Kings and general manager of Reno Bighorns, his educational background, NBA All-Star, Olympic Gold Medalist, and many more.

Abdur-Rahim emphasized that the development that happens in the G League is not just limited to the players, but also occurs with the officials, broadcasters, coaches, and beyond. “Primarily, we think of players who come through the league…but then there’s also officials, there’s also coaches—Quin Synder, for example, started in the G League—young professionals, broadcasters…so a platform of development,” said Abdur-Rahim.

Nelson asked Abdur-Rahim discussed what the future of the league will look like and how the future planning ties in to the league’s current goals. “As a league, we want to evolve, continue to be on the forefront of how basketball is changing, the needs of our players… looking for options and opportunities beyond just the traditional path,” said Abdur-Rahim.

The G League has also become a leader in creating more opportunities for diverse stakeholders in basketball, like minority groups. An example of this is rapper 2 Chainz who has ownership with the College Park Skyhawks (Atlanta). As Abdur-Rahim noted, the G League is a “league of opportunity”.

Loyal listener Jammel Cutler asked about Abdur-Rahim’s thoughts on how the G League Ignite team can help prepare the next era of players. Abdur-Rahim highlighted that many of the players coming into the G League now are younger and younger and the Ignite program is meant to assist in preparing them for the next level.

Abdur-Rahim continued on to say how the game of basketball has helped him connect with others. “Sports for me has, you know, always been a great example of how people come together, how we work together. The competitive nature of it, I think that brings out the best of what we’re trying to do,” said Abdur-Rahim.

Transitioning into the social responsibility that athletes have, Nelson and Abdur-Rahim spoke about how sports have the ability to unite us. “We relate with our sports stars, our heroes and you know sometimes that takes off the mask of what’s different…when you hear someone that you look up to and you admire, sometimes you forget this person is an African American or this person is a woman, and you just hear their message,” said Abdur-Rahim.

Athletes in several different sports have been using their following to raise awareness about social issues and advocate for change. Abdur-Rahim said, “…from that, these changes and things that are important in society…have a platform…and reach audiences that in many cases they wouldn’t reach because our athletes and folks that people look up to have this platform that reaches beyond just their community.”

Going back to Abdur-Rahim’s playing days, the two reminisced on the 2000 Olympics and the great memories from the games. Some of the standout moments to Abdur-Rahim were the Olympic opening ceremony, seeing athletes on their way to their competitions, spending time with teammates, and winning gold.

They also spoke about the iconic 1996 NBA draft class where Abdur-Rahim was the third pick overall. Looking back 25 years later, some other notable names from the ‘96 class are the late Kobe Bryant, Allen Iverson, Ray Allen, and Steve Nash. “It goes so fast. I’m telling the guys this year at some point in the night pause when you’re in the arena, pause and take everything in because it goes so fast and everything becomes a blur,” said Abdur-Rahim.

The last topic that Nelson and Abdur-Rahim covered was his role as a father to two student-athletes. His son, Jabri, plays basketball at the University of Georgia and his daughter, Samiyah, is a volleyball player in high school. Speaking about the most important lessons of childhood Abdur-Rahim said, “Have faith in the things that you teach them…you believe that in the moments where they have to make decisions…they’ll remember the things that are most important: their integrity, their faith, being good to people, and then hopefully the example that you as parents set.”