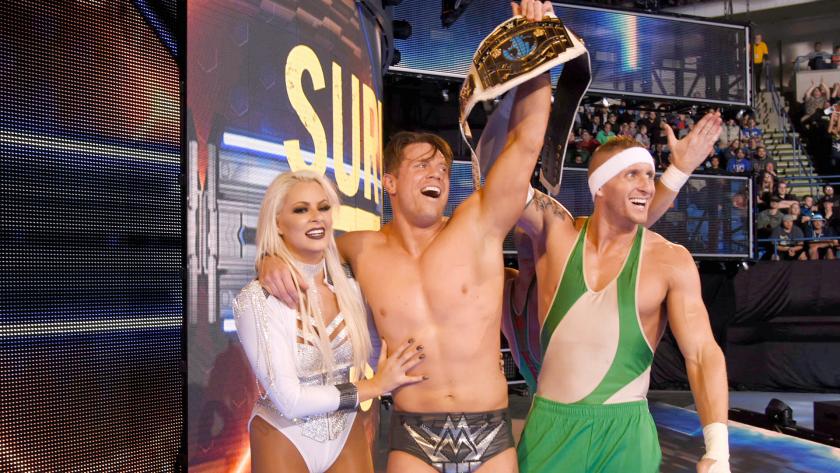 Tuesday night marked the 900th episode in SmackDown history. Here are the highlights as we head into Survivor Series, which takes place this Sunday:

The Miz and Ziggler have had incredible chemistry over with their series of entertaining matches. It was smart booking to have The Miz and Ziggler open up the show. It was not surprising that both men tore down the house and had the fans on the edge of their seats. This match had an added stipulation where the winner would go on to take on Sami Zayn at Survivor Series. The Miz was very desperate to get the gold back at any cost. The match went back and forth both men laid it all on the line. The Miz had several plans up his sleeves as an ultimate opportunist.

The Miz had interference from The Spirit Squad,  Ziggler fought his way through the adversity. Ziggler had The Miz in a small package pin attempt. All of a sudden, The Miz’s beautiful wife Maryse got involved behind the referees’ back she put The Miz on top of Ziggler. This was all that was needed for the Miz to pick up the win and reclaim the gold with the win The Miz is now a Six-time Intercontinental Champion. Now at Survivor Series The Miz will defend the Intercontinental Championship against Raw’s Sami Zayn. I just feel bad for Ziggler because every time that he picks up some momentum he just hits rock bottom instantly.

The build up for this episode was the return of the WWE Hall Of Famer, Edge, as he brought back his show “The Cutting Edge”. Edge decided to invite all five members of the SmackDown team on his show. Then all of sudden, the lights went out and the fans heard the infamous gong which only means one thing it is The Undertaker. Taker made his presence known giving a pep talk to the SmackDown team for extra motivation. Taker made a statement when he claimed that he was back, “taking souls and digging holes.” The Deadman gave the SmackDown team, a warning that if they fail against the RAW team at the Survivor Series they will have to deal with him.

Now I have watched Oney Lorcan on the indies for years in Smash Wrestling when he was known as Biff Busick. I thought when Oney Lorcan was on NXT, he was underutilized. Hopefully, on SmackDown he’ll get enough TV time and find his place. Kalisto had a tough warm up match with Oney Lorcan.  Lorcan held his own against the high flyer before losing. Kalisto will take on The Brian Kendrick, for the Cruiserweight Championship at Survivor Series.
SmackDown results:

Nikki Bella against Carmella ended in a no contest. Due to the fact that the RAW Women’s team invaded SmackDown in order to deliver a brutal assault Nikki Bella.

American Alpha, The Hype Bros, The Usos and Breezango defeated The Spirit Squad, The Vaudevillains, The Ascension and The Headbangers in a 16-Man tag team match. American Alpha picked up the win for their team via a Grand Amplitude on Thrasher.