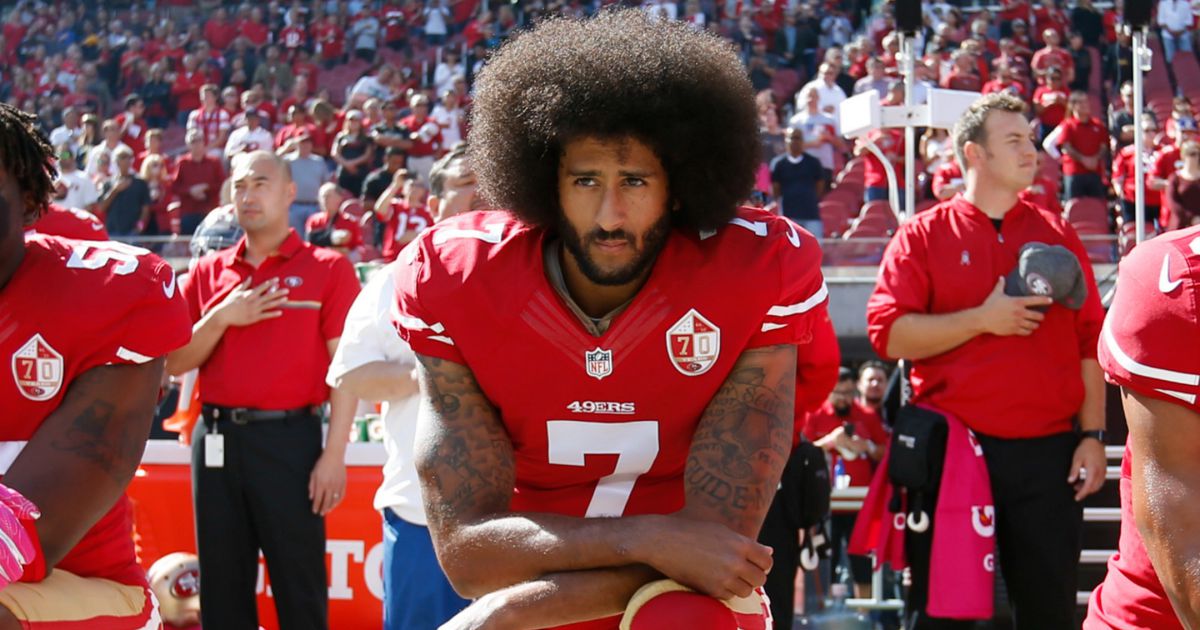 To some, he is a hero. A pioneer, a trailblazer.

To many, he’s considered a terrorist, a disgrace, and an embarrassment.

On August 26, 2016, former San Francisco 49ers quarterback Colin Kaepernick made a decision that will alter the course of how “The Star-Spangled Banner” national anthem is viewed in this country. The interesting notion behind how the national anthem is viewed now is that it has taken forefront over what is the main reasoning for Kaepernick’s stance by taking a simple knee during a preseason game on that day last year: Racial inequality.

Since that historic position by Kaepernick, what has occurred has been a snowball effect of more public racial disconnect, continued support for Kaepernick and other current players who followed, blatant disregard in signing the still talented Kaepernick, and now, public outcry from President Donald Trump. All because one man decided to do what he thought was right at the time in a peaceful approach I might add.

Everyone is entitled to their opinion. As pointed out, many, and I mean many, disagree aggressively with Kaepernick’s approach and his reasoning behind it. What bugs me is after all this time, over one full year, America has still yet to grasp WHY. Many still hang on the lazy viewpoint that this is all about the American flag and/or military disrespect. If you are knowledgeable enough of protests from African-Americans athletes in the past, the stances have been misconstrued for decades now.

What about Muhammad Ali’s stance against being drafted into the Army in 1967?

Each one appeared to be signs of disrespect, disloyalty, and dishonor to the mass majority of Americans. They were also all instances of peaceful demonstrations that showed no signs of hate, disdain, or maliciousness activity. But they all share the same resulting outlook as Kaepernick’s attempt at making a profound statement.

After Kaepernick’s controversial stance last August, it is impossible to turn on an NFL game now without seeing players following in his footsteps. Not to provide a rude gesture to those who disapprove but to clearly state that the message is widespread among those who pay attention. Well-known players in the NFL such as Seattle defensive end Michael Bennett, Kansas City cornerback Marcus Peters, Green Bay tight end Martellus Bennett, and Philadelphia safety Malcolm Jenkins are just some of the players who have been active and vocal in the past year in support of the fight against racial inequality in this country.

One year later, Kaepernick is still suffering an unofficial punishment for his practice. No team wants to sign him. Some will state that his ability as a quarterback does not fit their offensive scheme, which may be the case for some teams. However, for most NFL viewers, the blackballing of Kaepernick is somewhat obvious. It does not take a rocket science to figure that some teams are staying away from Kaepernick to avoid public backlash. Political activists have made it known and if you focus clearly enough, you will see it as well.

As we stand today, it is talked about just as much as the game itself nowadays. It has sparked boycotts on both sides of the spectrum and has given pre-game activities as much attention as it has ever been given before. Yet, even after all this time, a light is shined on the matter and has given it a mistaken identity. What has been purposefully demonstrated with hopes of providing common ground in the damaging aspect that is racial injustice has wrongfully been twisted and prodded into a method of perceived “ignorance”. One year later, the message has still yet to be received. One year later, the main purpose has been placed in the background and for the most part, completely ignored.  One year later, some still don’t get the clearer picture.