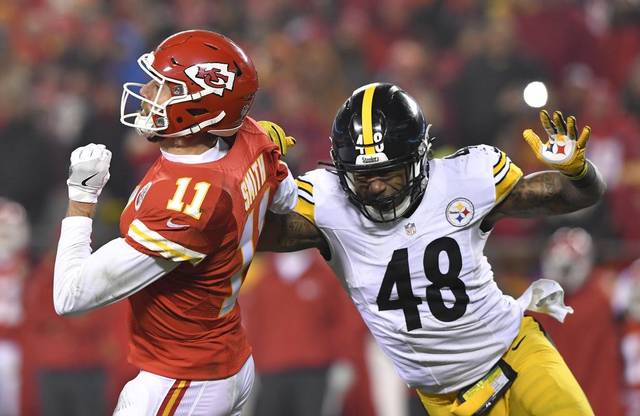 Even the ice and frigid Kansas City temperatures were not enough to halt the Pittsburgh Steelers.

After being slotted for an early kickoff but moved to primetime due to weather, the Pittsburgh Steelers earned a scrappy 18-16 win over the Kansas City Chiefs to advance to the AFC Championship Game.

Despite that type of production from their star players, kicker Chris Boswell was the true star for Pittsburgh. The second-year kicker connected on 6-of-6 field goals to provide the scoring for Pittsburgh. Boswell’s six field goals were a franchise playoff record as was Bell’s 170 rushing yards.

After a 66-yard drive to open the game, the Steelers got on the board first with a 22-yard field goal for a 3-0 lead.

Kansas City followed that up with a five yard touchdown pass from quarterback Alex Smith to receiver Albert Wilson on the ensuing drive.

Much attention to the Chiefs offense was placed on the electric Tyreek Hill and tight end Travis Kelce. Hill was held to just 45 total yards of offense. Kelce led the team in catches (6) and yards (77). The Steelers defense held Kansas City to just 227 yards of offense and 2-of-9 on third down conversions.

Boswell’s sixth and final field goal gave Pittsburgh an 18-10 lead with under 10 minutes remaining in the game. With under three minutes left, Smith and the Chiefs embarked on a 13-play drive. The drive consisted of two 4th down conversions and resulted in a touchdown run by running back Spencer Ware. The Chiefs lined up for a two-point conversion and seemingly tied the game at 18 with Smith hitting tight end Demetrius Harris in the back of the end zone. A key holding call on left tackle Eric Fisher negated the conversion. A re-attempt by the offense failed as the Steelers held on with an 18-16 lead.

On the following drive, quarterback Ben Roethlisberger found Brown for seven yards on a 3rd-and-3 with under two minutes remaining. The conversion sealed the game for Pittsburgh and sends the Steelers to Foxboro, Massachusetts next Sunday to tango with the New England Patriots.