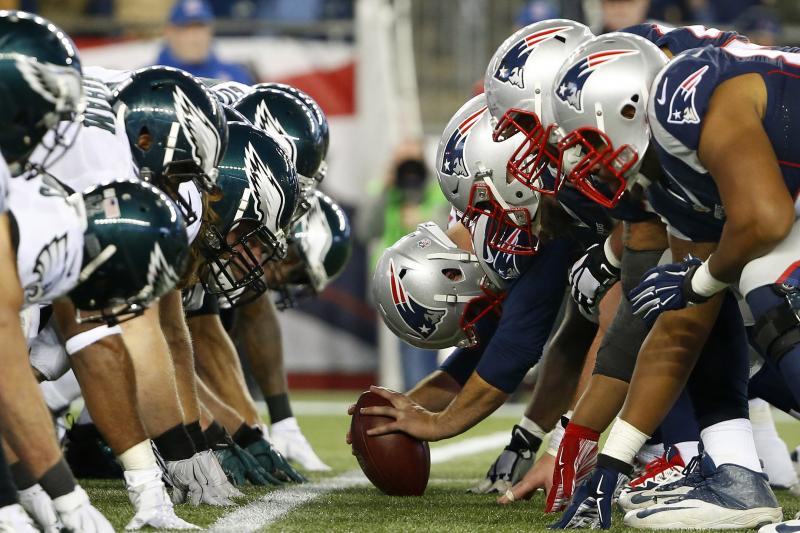 Everything is on the line. The workouts during the summer. The extra reps before and after practices. The times where they played through an injury. All for that to hoist the Vince Lombardi trophy as NFL champions.

Quarterback Tom Brady has accomplished that feat five times with the New England Patriots, with eyes on winning the franchise their sixth Super Bowl title since 2002. This was probably the least talented of the Patriots teams compared to their other championship squads but a healthy Brady and the mastermind that is Bill Belichick is all the Patriots need. The Philadelphia Eagles found their way to this point despite a number of season-ending injuries to multiple starters including second-year starting quarterback Carson Wentz. Second-year head coach Doug Pederson has the biggest game of his coaching career against what some call the greatest head coach in NFL history in Belichick. Can the Patriots continue their championship climb? Or will the underdog Eagles overcome the odds? Here is the complete preview and prediction for Super Bowl 52.

Everything on offense pretty much starts, continues, and ends with Brady. The 18-year pro just passed for over 4,000 yards (4,577) for the fifth time in the past six seasons and the fourth straight seasons with single-digit interceptions. Brady was instrumental in the Patriots late fourth quarter comeback against Jacksonville in the AFC Championship Game, with two late touchdown passes. It helps that tight end Rob Gronkowski is fully cleared from the league’s concussion protocol as the 28-year-old is coming off another All-Pro season. There is a carousel of running backs in the backfield for the Patriots but Dion Lewis and James White are your likely more workers at the position. The Patriots offensive line gets considerable spotlight because of their average play at times but they deserve plenty of credit for only allowing three sacks all postseason against Tennessee and Jacksonville.

All season long, the Patriots defense has been the classic “bend but don’t break” unit. While they have allowed a fair share of yardage to opponents, they only allowed 17 points per game this postseason, good for fourth overall. Safeties Devin McCourty and Patrick Chung lead a defense that at times has shown a considerable amount of vulnerability in between the red zones. The unit ranked 27th in the NFL in pressure rate during the regular season but veterans James Harrison and Trey Flowers will have to step to the plate in this one in order to throw off the rhythm-driven Eagles offense.

It’s fitting that the city that was the stage for the many “Rocky” movies is embracing a true underdog perception. It is hard for a team that is the #1 seed to be viewed as a long shot but that role has thrusted the Eagles to this point in the postseason. Backup quarterback Nick Foles has taken over since week 14 of the regular season due to the season-ending injury to starter Carson Wentz. During his two starts this postseason, Foles has thrown for 598 yards, three touchdowns, and zero interceptions. The stage is much bigger now that the Lombardi Trophy is on the line against the Patriots and the run game will probably have to be the engine for the Eagles against the Patriots. The team is averaging only 3.3 yards per carry this postseason but against a Patriots defense that was 31st in yards allowed per carry, the combination of LeGarrette Blount and Jay Ajayi will look to be a lot more productive.

The Eagles stout defense rightfully earned that reputation. Where it all starts is on the defensive line with defensive tackles Fletcher Cox and Timmy Jernigan and pass rushers Brandon Graham, Chris Long, Derek Barnett, and Vinny Curry. The defense was ranked #1 during the regular season against the run and have only allowed 156 total rushing yards during the postseason. It should be noted that the secondary for the Eagles is not too shabby themselves, led by veteran safety Malcolm Jenkins. The group has been dominant and pose a legitimate threat to the Patriots.

Similar to Super Bowl LI, the Patriots found themselves playing an NFC team that had the advantage as far as overall talent between the two teams. It took years of reconstruction, but the Eagles have put together a well-skilled roster from top to bottom. That is even accounting the fact that they lost their starting quarterback, middle linebacker, and left tackle to season-ending injuries.

The presence of Brady is a force on it’s own. Even with a very talented Eagles defense across from him, we have seen enough Brady postseason magic to know anything is possible with him under the helm.

The Patriots run game has a wall in front of them in the Eagles run defense which means we may very well see a game in which Brady has 35-45 passes. One key matchup to watch is Gronkowski against Eagles safeties Rodney McLeod and Jenkins. The 6’5 tight end was second on the team in targets and first on the team in receptions and touchdown receptions.

When the time comes, and it will come, Foles will have to step to the forefront and make a few plays with his arm. He has a trio of receivers in Alshon Jeffrey, Nelson Agholor, and Torrey Smith who are capable of posing issues to the Patriots secondary. However, this is much different than completing passes during the regular season. This magnitude amps the pressure meter for Foles and while the offense will be modified to prevent him from having to win on his own, a costly mistake against the Patriots in the Super Bowl is in all likelihood resulting in being a costly one. The Eagles will look to get off to a hot start and the defense is good enough to stifle Brady and probably create a few turnovers themselves. But this is Belichick and Brady on the big stage and their championship pedigree will show itself enough to escape a hard fought contest.