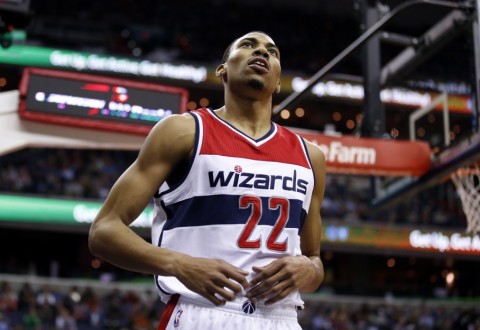 Prior to Wednesday night’s home matchup versus the Indiana Pacers, the Washington Wizards last saw this Pacers team in DC on March 5 th dating back to last season. In that game, the Wizards played well, built a double-digit lead, lost shooting guard Bradley Beal to injury, had no answer for Pacers SF Paul George, saw their lead dwindle and ultimately lost a close game. Wednesday night’s game at Verizon center was eerily similar in a game where Beal was again lost to injury, Paul George poured in 34 points, and the Wizards led by as many as 13 points and were ahead 85-74 heading into the fourth quarter. The Wizards saw their lead shrink to 2 points, however, this time the Wizards closed the game strong and were victorious 111-105. What made the difference in the outcome of this game? In my opinion, it was largely due to the excellent play of small forward Otto Porter Jr.

Porter netted 22 points on sixty percent shooting that comprised of 50% from three-point range including a huge three-pointer that put the Wizards up 99 – 94 with 1:40 to play in the fourth quarter. Porter’s play was so significant in large part due to the loss of Beal as well as the Wizards needing someone to step up late in games. As a reminder, it was Beal who missed a three-point shot that would have resulted in a Wizards victory over these Pacers on 12/19 at Indiana which in ways left this team looking for a second option for late game scoring behind all-star guard John Wall. Wall was sensational as always scoring a game high 36 points to go along with 11 rebounds and nine assists. As great as this performance was, help was needed and help was received by way of Porter.

Having a reliable and most importantly a consistent second scoring option will be critical moving forward as result of Beal being injured with such regularity. With this victory, the Wizards moved ahead of Indiana in the standings and hope to be a mainstay in the top eight of the eastern conference. The league is taking notice of the Wizards improved play following their eighth win in their last eleven games and when talking with Pacers starting PG Jeff Teague after his team’s loss he acknowledged that these games are vital in terms of seeding and playoff implications.

Maintaining a focus on moving up the standings and returning to the post-season will need to entail the Wizards striving to continue growing in all phases especially team defense and free throw shooting (27/37 on FT’s tonight). Otto Porter, who was 7/7 from the free throw line and arguably the team’s best defender may be the right guy to lead this surge.