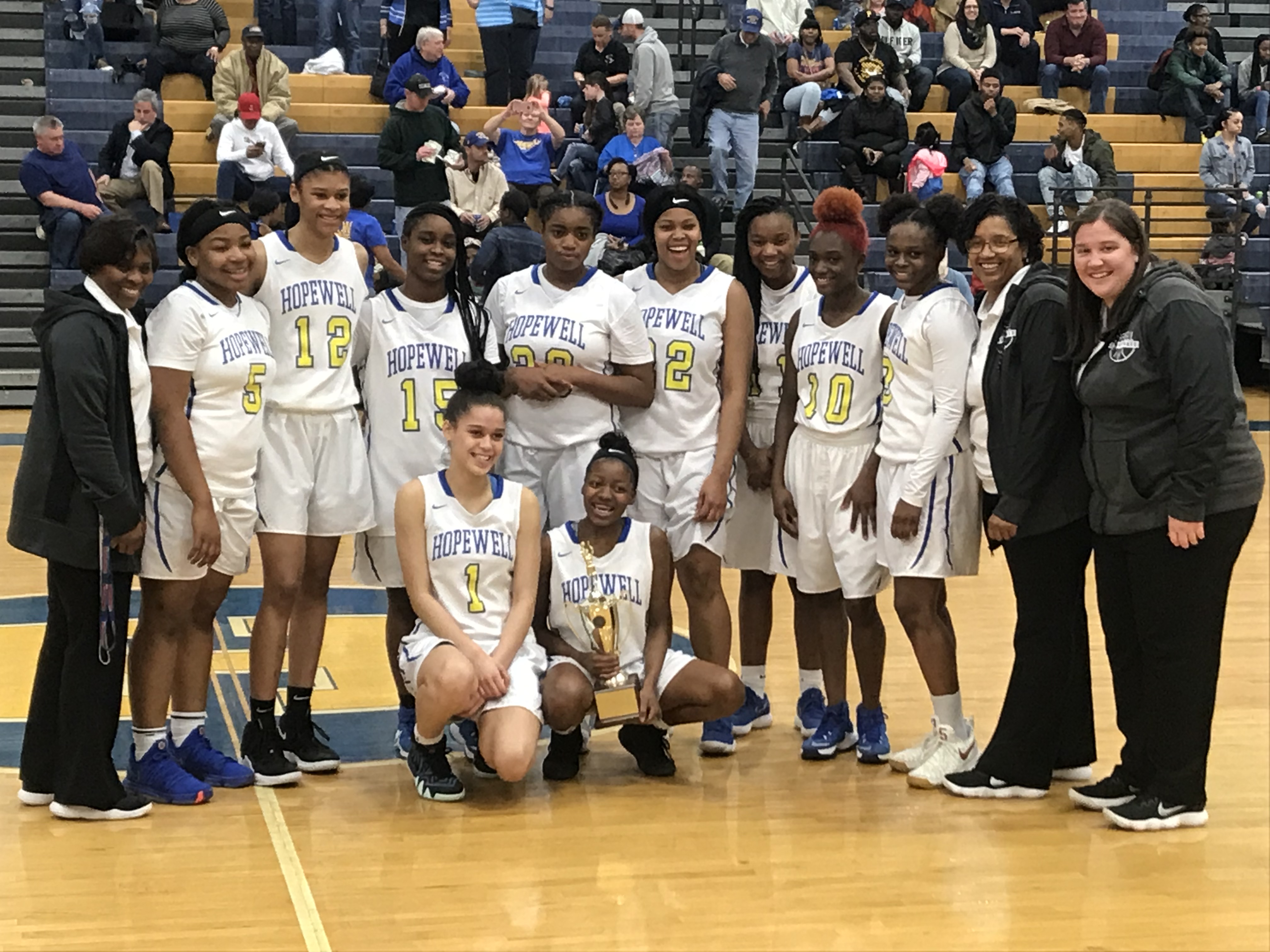 Beating a team with a player who was a National Player of the Year finalist, back for her Senior year is hard to do once much less twice. But the Hopewell Girls Basketball team who last year beat William Monroe ( Greene County) in the Quarterfinals of the State Tournament, knocked
them off again in this year’s Semifinals Round Tuesday night earning a second consecutive crack at a State Championship.

They did it with balanced scoring along with a tenacious press for the entire game that helped limit the effectiveness of Senior Samantha Brunell, who recently committed to playing college ball at Notre Dame, the 2018 National Champions. While Brunell still managed 25 points and double figures in rebounds, Hopewell’s top three scorers again came up with big performances: Tyjana Simmons, 23 points, Messiah Hunter, 19 points, and Courtney Scott’s 14 again paced the Lady Blue Devils. To complement that, Zy’keirrah Brooks came off the bench
for 14, and 5 critical second half points by starter Alena Pelham helped end the Dragon ’s season ( 24-3).

With Monroe’s 6’3 “ Brunelle hitting two first-quarter three-pointers, along with some tough baskets down low, Hopewell still only trailed by a point after one quarter 14-13. While Brunelle scored 10 of their first 16 points, Head Coach Jackie Edmond’s full-court pressure was intensified in the second quarter. Brooks helped to provide the defensive spark, and scored most of her 13 first-half points in that second quarter. Hunter stepped up as well scoring all of her 12 first-half points in the second quarter. The Lady Blue Devils outscored their opponents
27-13 in that quarter, which proved to be the difference because of the way Monroe played in the second half.

Sophomore guard Iyanna Carey became the recipient of quite a few assists from Brunelle when Scoring 10 of her 16 points in the second half, she helped neutralize the strong third quarter of Hopewell’s Simmons who scored the team’s first 7 points on her way to 11 third
quarter points. After Hopewell held a 54-43 advantage, but you had the feeling that Monroe was only a quick rally away from getting back into the game.

They made two furious fourth-quarter rallies. Cutting the lead to seven with an 8-0 run, Hopewell’s Pelham first came through with a critical three-pointer to help restore a 50-40 lead. Then, after getting the lead back up to 13, the Lady Dragon’s surged again and cut the Lady Blue Devil’s lead to only 5. Then Pelham, with only 3:32 left on the clock, made an incredible
drive to the basket finishing with a reverse layup. It not only stopped that second Monroe but breathed some extra energy into the Lady Blue Devils who would restore another lead.

Finally, they survived the strategy of Monroe to purposely foul  hoping the Blue Devils would miss more than they’d make from the foul line.  It mostly backfired as the Blue Devils managed to hit 17 of 25 fourth quarter free throws . Leading the way was Scott ( 8-10), Simmons (5-7) and Hunter ( 3-4).

The crowd roared its approval as the Lady Blue Devils, now 25- 2, advance to the State Championship Round for the second time in two years.  While losing last year by only 2 points, they hope to send their Seniors out with a win in this Thursday’s Championship game to be played at VCU’s Siegel Center in Richmond at 12:30.  In case you can’t get to the game in person, we’ll have it on the air here at WHAP Am 1340 and 96.9 FM, and we’ll go on the air with a pre- game show starting at 12 Noon.

Jeff Butler is the Pastor of Woodlawn Presbyterian Church in Hopewell and is the play by play broadcaster for the Hopewell Boys Basketball Team . Their games can be heard on WHAP Radio AM 1340 and 96.9 FM.,  on the Internet at FoxSportsRadioAM1340.com.

Jeff Butler is the Pastor of Woodlawn Presbyterian Church in Hopewell and is the play by play
broadcaster for the Hopewell Boys Basketball Team . Their games can be heard on WHAP
Radio AM 1340 and 96.9 FM., on the Internet at FoxSportsRadioAM1340.com.