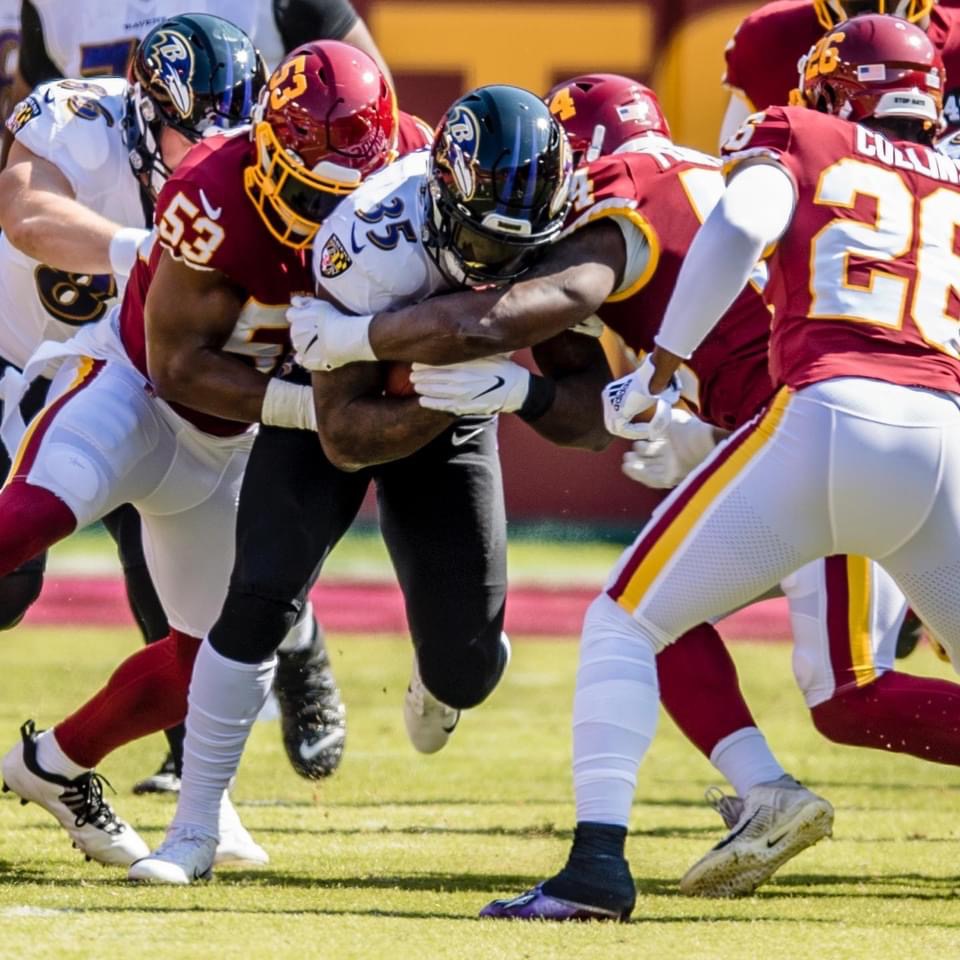 Washington fell to the Baltimore Ravens on Sunday by a final score of 31-17. What was really on display is two franchises that are in two different places. The Ravens, who are Super Bowl contenders, bounced back from a tough Monday night football loss to the Kansas City Chiefs, with a solid performance. Washington on the other hand, which is in full rebuild, was trying to evaluate if quarterback Dwayne Haskins is the right person for the job. No loss is a good loss but Haskins and the rest of Washington made some plays, and left others out there. Let’s look back at the game.

Dwayne Haskins- Quarterback Dwayne Haskins had his first career 300 yard game on Sunday. Also Haskins did not turn the ball over. Most of his decisions were the correct ones and took what the Ravens gave him. The Ravens played a lot of zone and wanted to see if Haskins would be patient and he was. Also the completion percentage of 71% is excellent and if he keeps that up the offense will improve weekly.

Antonio Gibson- The third round draft pick had his best game of his young career. Gibson had 13 carries for 46 yards and a touchdown on the ground, while adding 4 receptions for 82 yards in the air. Gibson showed good running ability and the versatility that the coaching staff had spoken on. Gibson is clearly a running back, but with exceptional receiving skills. This offense needs to get the ball in Gibson’s hands at least 20 times.

Terry McLaurin- Another masterful performance from the best offensive talent on Washington. While routinely drawing the opponents best cornerback with safety help, McLaurin had 10 receptions for 118 yards. McLaurin is deadly on slants, but can run the route tree. Hopefully with better development of the offensive line and Haskins, McLaurin can get more deep shots down the field. McLaurin, contrary to one prognosticator,  is definitely a number 1 receiver and should be treated as such.

Dwayne Haskins- Even though I was pleased with Haskins’ play in the game he had some bad moments, and those can not be overlooked. One thing Haskins has to work on is sacks and especially time and location of those sacks. The worst sack in the game came when Washington had gotten to 1st and goal from the 15 yard line took a sack that cost the team 18 yards. Those are the sacks you can not give up. Whatever it takes to throw the ball away must be done. Hopefully Haskins will learn this lesson.

Tackling- I mentioned tackling as a key to this game. The defense again had numerous missed tackles that hurt the team. There were too many times defenders were in position to make plays and they missed. Third and fourth down was unusually bad with missed tackles as the team allowed five third down conversions and two on fourth down.

Special Teams- The special teams had some miscues on Sunday. Dustin Hopkins missed a 54 yard field goal, which would have kept Washington in it. Right after the miss, the Ravens went right down the field and  scored a touchdown.  Then later in the game, after a solid stop on 3rd down, the Ravens ran a fake punt that was so obvious that even the announcers were talking about it. Ravens scored a touchdown right after that. Two plays that directly led to touchdowns, and when you lose by 14 points these plays matter.

Dwayne Haskins- Haskins has just made 11 starts in the NFL. In that time he has had three head coaches, three different offensive philosophies, and franchise turmoil. Haskins is a work in progress that will take time. Games like Sunday are encouraging that Haskins can put it all together and be a franchise quarterback that Washington desperately needs. With all this team needs that it must fill, lets hope quarterback is not one of those things.

Safeties- The weakest links in the defense have been the safeties. Landon Collins and Troy Apke have both been subpar this season. Apke was the surprise of camp being entrenched early as the starter at free safety which caused the release  of Sean Davis, looks timid and looks like he is thinking instead of reacting. And Collins, the highest paid player on the defense and a captain, has looked worse in coverage and in the box tackling. For the defense to take the next step, these two players will have to make the next step. They are obviously the best choices on this team for these spots but they need to turn it around.

NFC Least?- Washington is no longer in first place in the division. The Philadelphia Eagles were able to defeat the San Francisco 49ers on the road last night to move to 1-2-1. The Giants lost to Washington’s next opponent the Los Angles Rams  to remain winless at 0-4. While the Cowboys gave up 49 points to the Cleveland Browns at home to fall to 1-3. This division is winnable to every team if anyone wants to take it. It is very conceivable that eight wins will take the division. So Washington does have a chance.