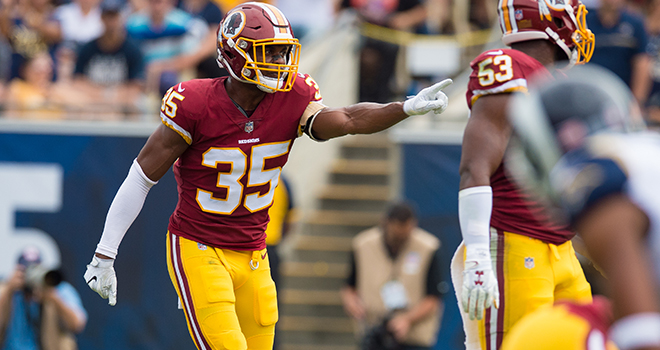 Second year safety Montae Nicholson was a solid draft pick last season for the Washington Redskins. The Michigan State product was perceived as a depth pick and a future starter for the defense, which over the years has had numerous mistaken draft picks and failed free agent signees. However by week two against the Los Angeles Rams, Nicholson was the starter at strong safety. His value was shown to a national audience the following week against the Oakland Raiders, where Nicholson recorded his only interception of the season on the first drive of the game. The Redskins had found their free safety.

Nicholson had shoulder surgery in March before the season and that led to him being behind during OTA’s and training camp. Nicholson suffered a head injury against the San Fransisco 49ers that was not determined to be a concussion but was very nasty looking collision. Against the New Orleans Saints a month later, Nicholson suffered a concussion and combined with the shoulder not being 100%, he was placed on injured reserve. The secondary and the defense in general suffered with him being not playing centerfield. DJ Swearinger had to play more centerfield which kept him from being close to the line of scrimmage making plays. The cornerbacks could not play press coverage as much to make sure they were not beat over the top. Needless to say, Nicholson’s injury set off a chain reaction that negatively affected the defense.

Speaking with Nicholson, I asked him the difference between his rookie year training camp versus this years camp. ” It’s a little bit different, not much just that one year of experience but actually there isn’t any difference,” Nicholson responded. He continued, ” I don’t want to say I’m starting from the bottom but the camp is the base, it’s the foundation and where you build camaraderie.”  When asked how he was feeling physically Nicholson stated, ” I feel great, it’s day two but I feel great.” When asked of his personal expectations, ” I have higher expectations for myself than others do. Unfortunately I took a step back with the injury but DJ (Swearinger), (Orlando) Scandrick, and J-No (Josh Norman) keep supporting me and putting me under their wings. Even when I do the right thing, it’s something else to be mindful for.”

Josh Norman was asked about Nicholson and his importance to the secondary. ” His presence as being a rangy guy, shoot, he’ll run to one side of the field like it ain’t nothing. Just moving like that, man, poses a threat to all quarterbacks to be wary of the deep ball…. You know, it’s a year for him, he can be special.” Norman being an aggressive press corner, he certainly knows the value of having someone to watch his back. During his morning press conference Head Coach Jay Gruden was asked about the safety group and the first one he mentioned was Nicholson. ” No doubt, I think Montae’s injury hurt a little more than people anticipated. He’s such an all-around athlete, great speed and he does compliment DJ quite well.”

The team certainly understands Nicholson’s importance to the defense. The draft dealt with the defensive line, however they knew that Nicholson’s health would improve the defense without adding anyone else. Josh Norman may have said it best, ” He can really actually so some things for our secondary that we don’t have and that’s the big thing we look forward to when we look at Montae Nicholson.” The defense for the Redskins has the potential to be very good and Nicholson will be a very important part of determining how good the defense and the season will ultimately be.