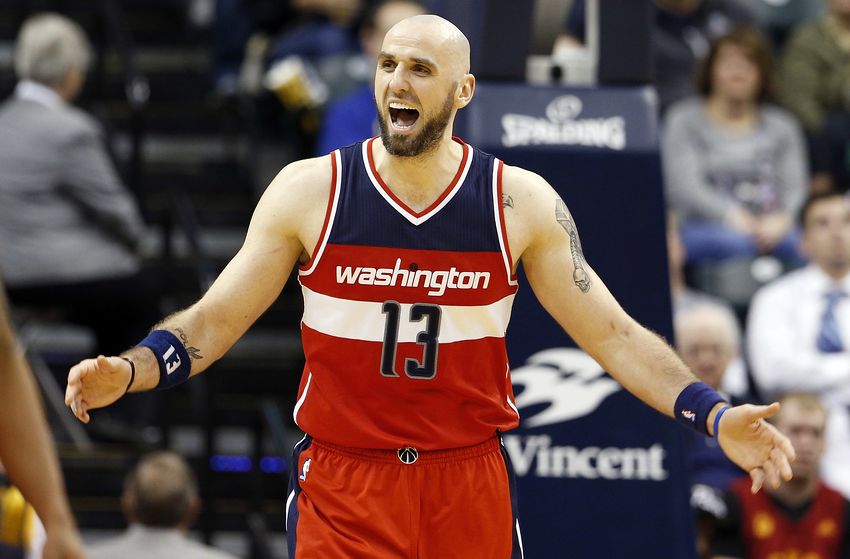 WASHINGTON- They certainly say that the “third time’s the charm,” and that was proven on a memorable St.Patrick’s Day as the Washington Wizards closed out their season series with the Indiana Pacers 109-102 at home.

Now the final 19 seconds of their previous matchup left a bad taste in the Wizards’ mouth as Bradley Beal missed three potential tying or game winning shots to seal the deal against the Pacers but last night’s victory was a collaborative effort on both ends with a surprising spotlight figure in center Marcin Gortat.

Marcin scored 18 points and dished out 4 assists with 8 boards. He shot an impressive 75% from the field and was 6-6 from the free throw line.

When asked on Marcin’s performance, head coach Scott Brooks said, “He works hard on his free throws. It’s good to see that he made all of six of them. When he sets his screens-and-rolls, they have to make tough decisions and he finished tonight…It was good ball movement. When we move the ball and we share the basketball he gets a lot of easy buckets for us.”

Marcin added, “I think we were a little bit quicker than they were. We had a pretty good start to the game and we came out ready to play, focused. We were making shots and that is how we built the lead in the beginning.”

Ball movement was on high display last night for the Wizards who’s starting five and bench lineup both had the chance to touch the ball and score. It’s been proven that if this team continues to show up game after game, they can position themselves in a beneficial position heading into the playoffs.

Bradley Beal led the team in scoring with 19 points and spoke on how important this game was for the Wizards playoff contention, “It was very important for us. We knew what was at stake with this game. We want to make sure that we took care of it and we did that. We did a good job of getting out to a good start on both ends of the floor. We played a good 48.”

The Wizards are now fourth (40-30) in the Eastern Conference standings, 12.5 games behind the top seeded Toronto Raptors. Obviously the first seed isn’t a top priority for the Wizards who still have 12 games ahead of them and face a hungry San Antonio Spurs team on Wednesday, a team who is also fighting for homecourt advantage in the playoffs.

But the more the Wizards play without All Star guard John Wall, the more this team has to figure out how the offense will work with him in the lineup. Bradley Beal has said that John looks good and he’ll be back in no time, but the question that comes into play is how long will it take for this team to get that on the court chemistry going with his absence equating to two months.

I’d rather see John return during the final two games of the season before throwing him into the lineup in the first game of the playoffs.

Only time will tell but let’s hope that the St.Patrick spirit will continue to linger onto this Wizards team, especially on Johnny’s recovery.