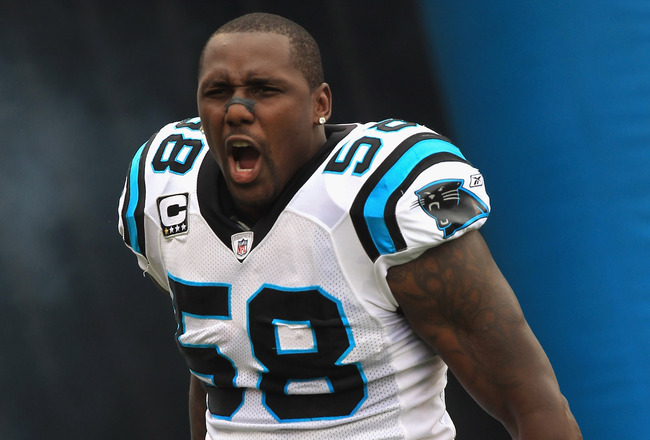 Carolina Panthers linebacker Thomas Davis wants a new deal before training camp starts. The 34-year-old linebacker is in the final year of his contract this season and wants something done sooner than later.

“That’s something all players in the last year of their deal, especially for guys who have put up the numbers I’ve put up and played the way I’ve played the last few years, you’d hope something get worked out,” Davis told the station. “We’re not actively talking now, but hopefully we can do something before training camp happens.”

“From a football standpoint and a community standpoint, Charlotte is always going to be home for me, and that’s my mindset,” Davis said. “I feel like there are a lot of people within our organization who feel the same way about me, but at the end of the day, it is a business and I understand that. Whatever happens moving forward there won’t be any hard feelings from me but I definitely plan on extending my career beyond this year.”

“Hopefully that would never come to fruition with me that I would have to play for another team. That’s not something that I look to do. And hopefully we can get something worked out here soon in terms of a contract extension. I don’t think you’ll find a player who cares more about the organization or a team than I do the Carolina Panthers. It goes above and beyond being a football player. I totally embrace the ‘Keep Pounding’ motto and its part of my lifestyle and everything I do.”

Even though Thomas is 34, he has been consistent with getting after defenders and making a huge impact on the defensive side of the ball. After overcoming three ACL injuries in his career, Thomas has only missed one game in three seasons and was selected as an All Pro in 2015.

Despite his success on the field, the coaches have limited Thomas last season in place of a younger player at the position. Thomas was optimistic about the approached and joked about the coaches’ decision.

“The way I see it this is another way to help extend my career. I might play till I’m 37,” Davis said.

With everything that the Panthers have experienced with bad breaks, short depth and injuries that hindered their playoff hopes, it would not be a bad idea to keep someone who has gave you everything they had and wants to retire as a Panther.