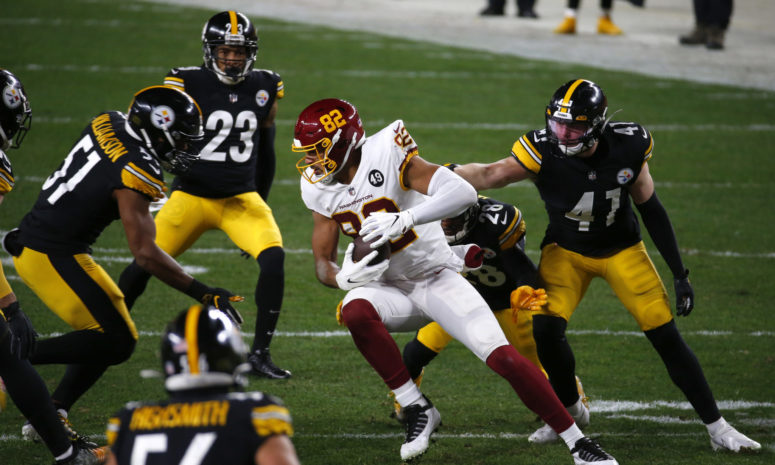 As training camp winds down and the regular season approaches, the Washington Football Team has added talent and depth at every position on the roster. While positions like the defensive line and secondary seem to be full of talent, there are a few others that could cause issues in the coming season. Here are my three positions that could be problematic for the success of 2021 Washington Football Team.

Coach Rivera and his defensive staff saw this position as a weakness and addressed this by drafting Jamin Davis in the first round. Davis who should be a starter from day one has tremendous athletic ability and high upside. However his experience at the position (only 10 starts at Kentucky) is an issue. Right away he will not be the quarterback of the defense, that responsibility will fall on Jon Bostic. Bostic who deserves plenty of credit for being the mike linebacker and setting the defense, has his limitations in coverage.  Bostic is best suited as the SAM backer which allows him to play down hill and attack the running game. In his 8th season however Bostic can attacked in open space. Cole Holcomb has come into his own playing the WILL backer which he is best suited and has adjusted to the NFL game nicely. The bigger issue comes after those three starters where there is not much depth at the position. Khaleke Hudson, the 5th rounder from the 2020 draft, has started two games last season but has not had the strongest of camps. Jared Norris, Joe Walker, David Mayo, and Jordan Kunaszyk are not the strongest backups and are more special teams guys. Any injury to the starters and the defense may have some issues. Now this defense has some flexibility with the strength of the safeties, to get by with two linebackers on the field. However I still think that a player or two will be added after roster cuts. Concern- Medium

This may seem like an odd choice considering Washington has a top 100 player at one of the positions, however there is some concern here. Brandon Scherff at right guard is as good as it gets, however Scherff has not played a full season since 2016. He missed three games last year with injury and with an extra game you that seems unlikely that he will play all 17. The left guard position has been a battle between Wes Schweitzer and Ereck Flowers. Both have strengths and both have weaknesses. Both had some issues against Cincinnati last week in pass protection and historically the left guard position has given the Washington offense its’ most trouble up front. Now if Scherff goes out, Schweitzer can move to right guard and Flowers at the left guard, but behind that the picture gets bleaker. Saahdiq Charles is still learning guard so if he is playing he will be learning on the fly. Wes Martin I don’t think makes the roster. Hopefully the team gets this settled because this position will dictate how well the offense will run in 2021. Concern- Medium

Logan Thomas was a revelation at tight end last season. After spending a few seasons, first as a quarterback then converting to tight end, Thomas showed ability in being a receiver that was not expected. Also Thomas played in 92.65% of the team’s offensive snaps in 2020, which was amazing. However the team can not expect that from him again this year, and should want to keep him fresher by playing less snaps. Behind Thomas will be some rookies trying to learn the position at the NFL level. John Bates is a solid player, he is just young and will take time to adjust to the pro level. Sammis Reyes is a good story but he is learning the sport of football and has had a few injuries throughout camp. Ricky Seals-Jones is a veteran who knows the game but isn’t the same player as when he first came into the league. If anything happens to Logan Thomas, the offense can falter because Thomas has become a solid safety valve. As in 2019, if the offense does not have a good tight end, the offense just becomes more limited and easier to defend. Concern- High

Expectations inside the Beltway are high for this team and I do believe Washington will defend their NFC East title from last season. That is contingent on the play at these positions, which will be the difference between defending champs and the playoffs, or a long offseason.