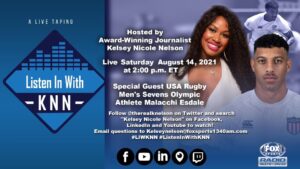 On the latest edition of “Listen In With KNN” sports talk podcast/radio show presented by FOX Sports Radio 1340AM/96.9 FM, host Kelsey Nicole Nelson welcomed her first-ever rugby athlete to the show in Malacchi Esdale. Esdale was part of the USA Rugby Men’s Seven Olympic Team, being selected as a member to join the team after a standout career with the Houston SaberCats.

Nelson and Esdale kicked off the show talking about the 2020 Tokyo Olympics that officially concluded just a few weeks ago. Speaking about his first Olympics experience and first time in Japan Esdale said “the people were so humble and hospitable.” Esdale’s inaugural Olympic experience will be different from athletes’ past because it took place amidst a global pandemic. Esdale spoke to some of the protocols that were being used to protect the athletes such as daily COVID-19 tests and tracking apps to verify athletes weren’t coming into close contact with others. “Tokyo did a really great job of keeping everything under control…with everything given, it was a very good experience and one that I’ll remember forever,” said Esdale.

The United States Men’s Rugby team finished sixth which is the highest finish they’ve had in the Olympics. Esdale spoke about how the players before him have set the foundation and how he looks forward to the up-and-coming young players to continue to grow the game. “Everything that you see has been years and years and years of build-up. So, first of all, I got to give huge kudos to all the boys that were here before us, and that really laid down the foundation because Rugby is not the biggest sport in America,” said Esdale.

Esdale and Nelson also spoke about the future growth of rugby. The men’s rugby sevens made its Olympic debut in Rio de Janeiro at the last games. “With the implementation of the MLR [Major League Rugby]…the teams have youth programs so they’re trying to grow the sport from the bottom up…and that’s when the skill set comes in as well,” said Esdale.

As we look to the future, Nelson asked Esdale if he’s already planning for the 2024 Paris Olympic Games that are even faster approaching now that this year’s Olympics was delayed a year due to the pandemic.  “Absolutely, I think these next couple of years are going to go by like that, especially with it being only three years away. A lot of these guys are really looking forward to it…I think it’s perfect because you don’t want to lose sight of what happened in the last one, we didn’t do as well, but this is going to make us hungry for the next Olympics.”

Rugby is an underestimated sport amongst young athletes and Esdale thinks that with the same energy they exert to get into other sports, they can develop themselves in rugby, too. “You know, everybody is used to throwing a baseball or a football or whatever. If they get used to throwing a rugby ball at a young age, they’re going to have that skillset and will catch up because America has the best athletes.”

When it comes to rugby and growing it amongst youth, a common worry among many parents is the safety of the game. This is a worry similar to concerns we see from parents when it comes to safety in a sport like football. “If you do it the right way, you will be safe. I have played football at a very high level, collegiate level, and then rugby at the highest level. So, in my comparison, I actually think that rugby is a little bit safer just because you don’t have that false sense of protection with the helmet and stuff so you’re tackling a lot differently,” said Esdale.

Esdale is originally from Newark, Del., and moved to Naples, Fla. as a young teenager to find athletic opportunities. Esdale was a basketball player, wide receiver in football, sprinter, and high jumper in track and field. Skills from all these sports he uses today playing rugby.

“I think that rugby is a culmination of all the different sports. You have the spatial awareness of soccer, the vision of basketball, and the physicality of football so I think that my diversity in sports definitely benefited me when I made the transition to rugby,” said Esdale.

As he reflected on high school, Esdale then told the audience about his journey into the sport. Esdale was in the process of finishing up his high school football season when he dislocated his shoulder in a playoff game. “While I was waiting for surgery, I had the bright idea to start playing rugby. I don’t know what possessed me…one of my friends approached me, the Naples Bears at the time were a pretty successful high school club and he was like ‘Hey, do you wanna win a championship with us?’ and I was like, ‘I don’t know what you’re talking about, but yes I do…,’” said Esdale.

Esdale and Nelson then spoke about a multitude of other interests that Esdale has outside the sport. This includes vegan eating, graphic design, modeling, and cooking. Esdale started a vegan farmers market in San Diego with the purpose of an eclectic scene. “I wanted to make it so that it was like an event almost. You can stay, listen to music, look at some art, get some good food, make conversation, sit down and chill out,” said Esdale. Esdale plans to keep the farmers market going every second Sunday of the month,”

“I’ve always prided myself on being diverse, whether it be my personal background or the things that I like to do. You can never have too many skills.”

If you’d like to hear more about Malacchi Esdale’s day as a rugby player, his interests, and where you can find rugby matches near you, tune in to the episode below. You can find Esdale on Instagram, Twitter, and Facebook.