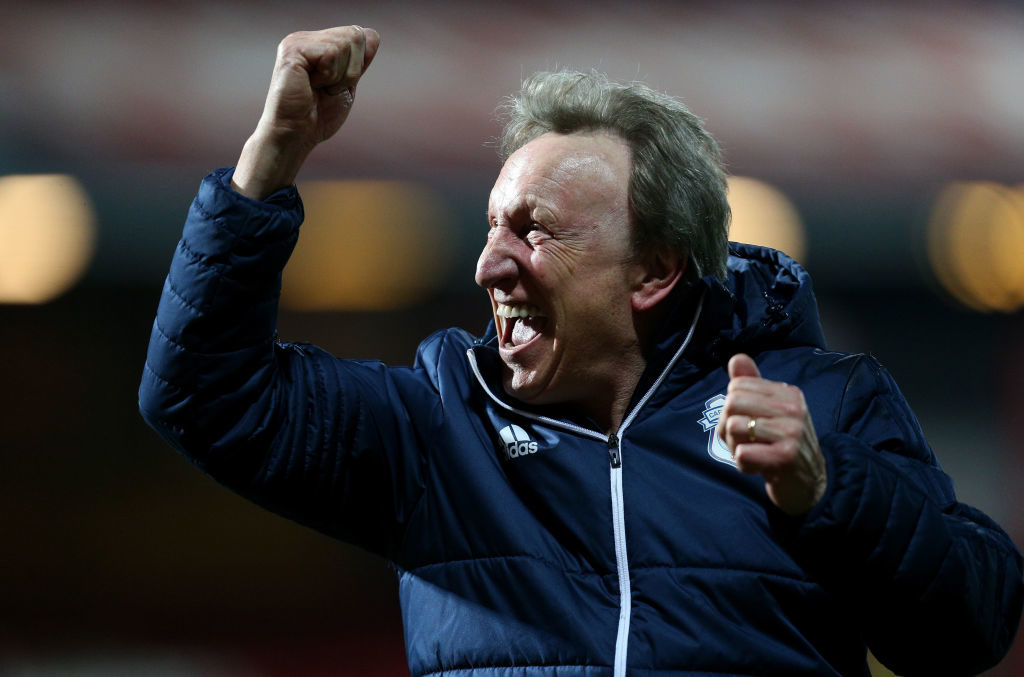 Tweet
Throughout a storied and well-travelled near forty year managerial career which has witnessed tenures at Gainsborough Trinity, Burton Albion, Scarborough, Notts County, Torquay United, Huddersfield Town, Plymouth Argyle, Oldham Athletic, Bury, Sheffield United, Crystal Palace, Queens Park Rangers, Leeds United, Rotherham United and currently Cardiff City, Neil Warnock, has successfully won eight promotions at the helm, whilst being relegated once and additionally relieved of managerial duties on five separate occasions.
Warnock, who has managed more than 1,430 games throughout a 38 year management career, currently faces the bold challenge keeping Cardiff City in the Premier League this season after winning automatic promotion from the SKYBET Championship last season.
Cardiff City, presently 16th in the Premier League, have earned 11 points from their first 14 games this term and face West Ham United this evening at the London Stadium in the Premier League.
However, the ever-outspoken Sheffield-born manager, who most recently turned seventy, has infamously had a lengthy series of tell-it-like-it-is, highly candid quotes which have both created high controversy, offense and even moderate amusement.
Warnock’s refreshingly honest to a fault character has often got the controversial Yorkshireman into very deep trouble, whilst also becoming one of the true polarizing characters of the English game along the way.
The Cardiff City manager has never refrained from explaining what’s on his mind and FOX Sports Radio 96.9 FM/1340 AM has compiled Neil Warnock’s top ten most controversial and candid quotes in his managerial career.
10. “When I pass away, I don’t want clapping or a minutes silence. I want a minute’s booing at Bristol City.”
Warnock’s thoughts on fans paying tribute to him when he dies
9. “I don’t accept it at all. I think it’s totally out of order, I think he (Nuno Espirito Santo) was a total disgrace. I used strong words and I meant every word of them. He’s got to learn in British football you have manners and class when you win a game.”
The brutally frank Yorkshireman on Nuno Espirito Santo arrogantly refusing to shake hands at full-time thereafter Cardiff City played Wolves in the SKY BET Championship 2017/2018 season.
8. “The money players are on these days is immoral, but you can’t knock it.”
Warnock on current salaries compared to his era as a player
7. “I don’t think we’ve got a discipline problem. It’s the players who are thick who are causing the problems.”
Warnock on the unprofessionalism of certain players undermining overall team success
6. I used the Olympics in my team talk. When I went to bed, Kelly Holmes turned me on – which is sad for me isn’t it? But when I watched Kelly (Holmes) and the relay lads, their ambition was to aim for the top
Warnock’s unlikely source of inspiration for team talks
5. “My wife will be glad about (José) Mourinho coming to Brammall Lane because he’s a good looking swine, isn’t he?”
Warnock on José Mourinho visiting Sheffield United’s Brammall Lane during the brooding and confrontational Portuguese’s successful first spell in charge at Stamford Bridge
4. “I remember the day they (Sheffield United) sold Brian Deane and Jan Åge Fjørtoft. It was like when President Kennedy got shot.”

3. “The way it has come out so far, you would think I was guilty of committing more crimes than Osama Bin Laden.”
Warnock on his overall reputation in the game
2. “Forget the boring Premiership; this was a cracking advertisement for the Championship”.
Warnock on the overall quality of the SKY BET Championship
1. “For many years I have thought he (El Hadji Diouf) was the gutter type – I was going to call him a sewer rat, but that might be insulting to sewer rats.”

Warnock on the very controversial and much-maligned El-Hadji Diouf