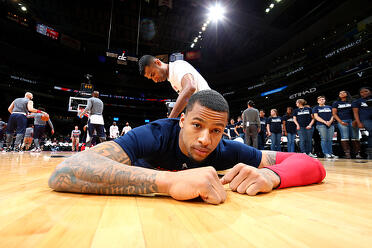 Phoenix, AZ– There are no guarantees in the NBA and one person who knows this first hand is Trey Burke. Drafted 9th overall in the 2013 draft, Burke has gone from being a starter in Salt Lake City with the Jazz to not playing at all. Subsequently, Burke would be traded to Washington for a new opportunity to prove himself. During this time, the Wizards were a different team. The bench was one of the worst in the league and the production from the second unit was next to non-existent. John Wall was still recovering from surgery and wasn’t playing back-to-back games.

The opportunity seemed to be grand for Burke. However, things never came into fruition and now Burke is playing minimum minutes; if at all. Prior to the trade deadline, it was rumored he would be waived because the Wizards signed Brandon Jennings. The Wizards are now the second seed in the Eastern Conference and the Wizards’ rotation is set. So now the question is, where does this leave Trey Burke?

Trey Burke in his own Words:

I asked Trey Burke about the Wizards obtaining Brandon Jennings and basically how does that impact him @1340AMFOXSports pic.twitter.com/ywR7d8c2cL

Trey Burke: “I’m still myself. I’m still confident. Like I said just gotta be ready man. Whenever he calls my number I gotta be ready. I feel like they kind of made their decision and went the route they were going to go. So, I just gotta stay prepared…..”

Q: Do you feel like this team gave up on you a little too soon?

I asked Trey if he felt like he was given up on by the Wizards @1340AMFOXSports pic.twitter.com/EpDDgnhsdg

Trey Burke: “Everybody got their own opinion. For me, I can’t really…sometimes you can’t allow your emotions to wear on your sleeves. You just gotta play. You gotta be ready to play. It’s a business……..I’m a young player I still have a lot of years in this league. I know that forsure. I just gotta stay positive and be ready when they call my number”

Q: How do you remain positive despite things not going in your favor?

Trey Burke on staying positive despite his role changing with Wizards. pic.twitter.com/Ya4TDimiR3

Trey Burke: “Just know what type of player you are. I still know what player I am. I’m a scoring player maker. I feel like when someone realized that; that’s when my gifts or my talents unleashed themselves and just keep God first. Know that he’s in control of everything. That’s how I look at it. Somethings are out of your control. You can’t mope around and have self-pity for yourself. This is a big boys’ league. Understand that, I know my time coming. As a team we are winning; that’s always great. I gotta keep working hard. Keep getting better as an individual player everyday.”