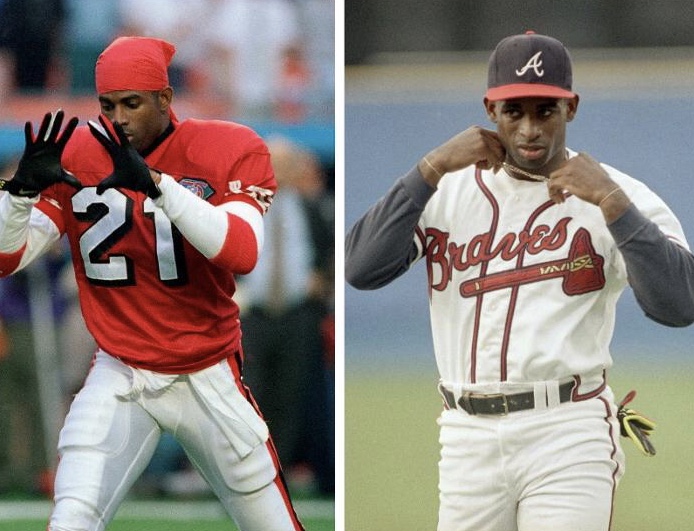 If there is anyone that understands the plight of former Oklahoma two-sport star Kyler Murray, it’s Deion Sanders. At an advance screening for his ESPN 30 For 30 special, “Deion’s Double Play”, Sanders was asked what advice he would give Murray who recently announced his intentions to enter the NFL Draft after signing a contract with the Oakland A’s.

Many knew of Sanders prowess as a star in both the NFL and the MLB, notably his time spent in Atlanta as a member of the Falcons and the Braves. Sanders’ Herculean effort to suit up for both the Braves and the Falcons in two different states within 24 hours is the stuff of legends. However, not many knew about the behind-the-scenes backlash Sanders received.

When Sanders pulled double duty to help the Braves reach the World Series, he was not under contract; his contract had expired at the end of July. Sanders was criticized in the media by both Braves front office personnel as well as sports reporters, notably Tim McCarver. Murray himself has drawn the disdain of the media for his decision as well. Oakland A’s reporter Jen Rainwater went as far as to wish injury upon the young athlete.

As for advice, Prime says he would advise Murray to play baseball since he doesn’t have the luxury of playing both.

“Kyler has to make a decision because the game does not equip the quarterback to go back and forth. It has to be one or the other. And for me, I would choose baseball in that same vein as Kyler Murray right now because of the economics of the game. But he loves football. They have not come at him yet. They’re gonna start coming at him in a minute telling him what he’s not. See he’s still a kid and we cover kids in college until they say they’re gonna be pro. Then everybody starts shooting at em.”

Sanders makes a good point when referencing the financial differences between the NFL and the MLB. NFL contracts are highly incentivized and are not guaranteed while a major baseball contract would offer more financial stability. Some are projecting Murray to be a first rounder while others are under the impression that the Heisman winner’s size will derail his NFL dreams. Either way, it’s Murray’s decision to make and so far he’s going with his heart on this one.