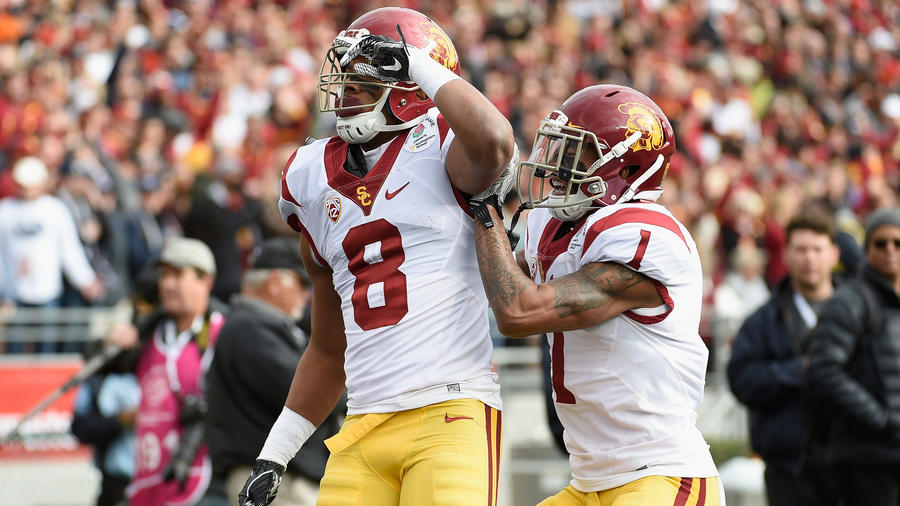 Maybe it was the mystique that is the Rose Bowl Coliseum. Or maybe it was two of the hottest teams in the country trying to one-up the other.

A 46-yard field goal by USC kicker Matt Boermeester as time expired gave the #9 Trojans (10-3) a 52-49 victory over #5 Penn State. A high-scoring contest that turned out to be the highest scoring game in Rose Bowl history. It also featured over 1,000 total yards of offense, 46 first downs, and one epic finish.

A 26-yard touchdown connection from quarterback Sam Darnold to receiver Deontay Burnett gave USC a quick 7-0 lead in the 1st quarter. The drive was set up by an interception by USC corner Adoree Jackson on the previous drive by Penn State. Two field goals by Boermeester gave USC a 13-0 lead in the opening quarter.

Both teams traded scores in the second quarter with 35 combined points. Penn State (11-3) inched the deficit to 27-21 before halftime with an 11-yard touchdown catch by tight end Mike Gesicki. Penn State quarterback Trace McSorley tossed for two touchdowns in that quarter including the one to Gesicki.

The Nittany Lions entered the contest as winners of their last nine contests. Including wins over Ohio State and a Big Ten championship game win over Wisconsin. Also, Penn State fielded a high-scoring offensive unit that averaged 36.7 points per game. For the game, running back Saquan Barkley had himself a busy day. The sophomore ran for 194 yards and two touchdowns and added another 55 receiving yards and a score. His seven-yard touchdown catch with under two minutes left in the third gave Penn State a 49-35 lead.

However, the fourth quarter belonged to Darnold and the Trojans. Darnold took control of the offense with two minutes remaining in the game and down 49-42. The freshman quarterback guided USC on a three play, 50-yard drive. Another touchdown connection with Burnett by Darnold, this time for 27 yards, tied the game at 49.

On the ensuing drive, McSorley was intercepted, for the third time, by USC safety Leon McQuay III. McQuay’s 32-yard return helped set up the game-winning kick by Boermeester to give USC the epic victory.