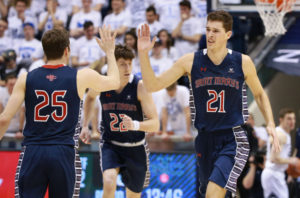 After giving up a 16 point lead, St. Mary’s advances with an 85-77 win over VCU.  This game started off like a ping-pong match going back and forth.  In the first half of the game, there were six lead changes between the two teams.  Both battled hard and did not want to be the team to go home early.  Although VCU had a good start, Saint Mary’s wanted it more.  They ended the first half on a crucial 29-13 run.  VCU had no answer for freshman Tanner Krebs who had a game-high 12 points off the bench at the half.  Behind Krebs and Junior Jock Landale’s 10 points (5/5 from the field), Saint Mary’s went into the half with a confident 15-point lead.

Whether is was a locker room talk or them waking up, but VCU came out in the second half looking like a different team.  They started off on a 23-10 run to cut the lead all the way down to two points.  Saint Mary’s came right back with a quick 7-2 run to increase the lead back to seven points.  Despite VCU’s amazing comeback, Saint Mary’s would not let them take the lead.  They stayed on top despite the great effort by VCU.  VCU got tired at the end and could not take advantage of that incredible comeback that made.  Despite giving up a 16 point lead, Saint Mary’s held on to advance to the next round.

In his final tournament game, senior JeQuan Lewis led VCU with a game-high 30 points.  Saint Mary’s had four starters in double figure scoring with Landale leading the way with 18 points and 13 rebounds.  St. Mary’s will go on to face (2) Arizona.