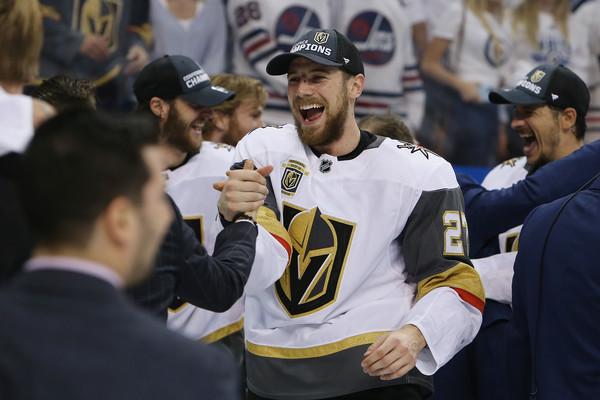 There was a thought by many fans and pundits that Las Vegas couldn’t support an NHL franchise. It was in the middle of the desert, it wasn’t a “hockey town” and many were skeptical. Despite that, the NHL approved for a 31st franchise in the sun-drenched Vegas heat and that franchise would be called the Vegas Golden Knights.

William Foley, a billionaire businessman and specialist in financial services, as well as the Maloof family (the owners of the NBA’s Sacramento Kings franchise), were confirmed to lead the potential ownership group of Las Vegas’ future franchise. In February 2015, Vegas held a season ticket drive with parties who were interested placing a 10 percent deposit. In just the first day and a half, the drive drew 5,000 deposits and the goal of 10,000 deposits was met by April 2015.

A little more than just a year later, on June 22, 2016, the NHL approved the Las Vegas expansion bid by a unanimous vote, with the team beginning play during the 2017-2018 NHL season. Las Vegas, a city that will soon see the Oakland Raiders relocate, was rewarded with their first major professional sports franchise. The team would be named the Vegas Golden Knights on November 22, 2016.

George McPhee, the former general manager of the Washington Capitals, would be named to the same position with Vegas. The Golden Knights would name Gerard Gallant the inaugural head coach of the team. On June 21, 2017, Vegas participated in the 2017 NHL Expansion Draft, with goalie Marc-Andre Fleury (Pittsburgh Penguins), right winger James Neal (Nashville Predators) and center Jonathan Marchessault (Florida Panthers) headlining their draft.

On October 1, 2017, a gunman opened fire at the Route 91 Harvest music festival on the Las Vegas Strip, killing 58 people and injuring 851. This act of terrorism was the largest mass shooting in American history by one individual. Residents in the city looked to assist the victims, with support from others around the country. Among those individuals helping were members of the Golden Knights.

Before their first home game against the Arizona Coyotes, Vegas’ new NHL team held a pregame ceremony to honor the victims of the shooting, with a few players giving passionate speeches about the city that newly adopted them. Each of the 58 deceased victims were projected onto the ice in gold during the 58 seconds of silence.

The Golden Knights would also ask for donations, with proceeds going to the victims. Instead of advertisements on the boards of their home ice, Vegas would go with #VegasStrong on their boards. It would become the rallying cry of the season. Ultimately, the Golden Knights would win their inaugural home game, 5-2.

“There was so much emotion, but we tried to stay focused on hockey, even though it was bigger than hockey,” Neal said of Vegas’ first home game via The New York Times. “This is our town. We’re making it our home, and we want it to be a hockey town.”

With their 5-2 win over the Coyotes, the Golden Knights began their season with a 3-0 record. This was the best start for an NHL expansion franchise ever and the club would win eight of its first nine games.

Fighting through injuries, retirement and adversity

Vegas dealt with a few injuries in the earlier part of the season, with goalies Fleury and Oscar Dansk going down. On October 3, 2017, the Golden Knights claimed goalie Malcolm Subban of waivers after being waived by the Boston Bruins. On October 15, 2017, Subban recorded his first NHL win against his former Bruins. Just a few days later on October 22, Subban went on the injured reserve with a lower body injury. With Subban’s injury, Vegas started Maxime Lagace as their fourth goaltender in 11 games.

Four games later, forward Vadim Shipachyov became the first retiree for the Golden Knights, opting to finish his hockey career in Russia’s Kontinental Hockey League. Vegas wouldn’t be deterred, winning six games in a row in December (an NHL expansion team record). On February 1, 2018, Vegas set a record of wins for a team in their debut season (34), while only having played 50 games. 20 days later, the Golden Knights set a record for most points by an expansion team in its inaugural season (84).

They would take their firsts to new heights, clinching a playoff berth on March 26, becoming the first team since the Edmonton Oilers and Hartford Whalers in the 1970-80 season to make the playoffs during their inaugural season. Five days later, Vegas clinched the Pacific Division, becoming the first true expansion team in the four major professional sports in the United States to win their division.

The Golden Knights were led in points by centers William Karlsson (78) and Marchessault (75). Not one player was in the top-30 of goals scored or assists during the regular season, showing that the team could thrive beyond the stat line.

Team wins throughout the playoffs

With one goal scored by Shea Theodore in the first period of Game 1, the Golden Knights defeated the Los Angeles Kings for their first ever playoff victory. Vegas followed up with a 2-1 victory in double overtime over the Kings in Game 2. In Game 3, Vegas took down Los Angeles 3-2 and finished off the sweep with a 1-0 victory over the Kings on April 17. The Golden Knights became the first team in NHL history to sweep their first playoff series.

In the Western Conference Semifinals, Vegas would take on the San Jose Sharks. Vegas would beat San Jose handily in Game 1, with a 7-0 victory. Marchessault, Haula, Neal, Alex Tuch, Cody Eakin, Colin Miller and Theodore all scored. Vegas would lose against the Sharks in the next game, going down 4-3. The Golden Knights would respond with a 4-3 victory of their own, leading the series 2-1. San Jose shut out the Golden Knights in Game 4, 4-0, with Fleury allowing all four goals. Though they ran into a tie in the series, Vegas would blow out the candles in the next two games.

In Game 5, Vegas claimed victory over San Jose with a 5-3 victory and followed up with a 3-0 victory in Game 6. With their series victory, Vegas became just the third team in NHL history to win multiple playoff series in their inaugural season, advancing to the Western Conference Finals.

In their first taste of the Western Conference Finals, the Golden Knights lost Game 1 against the Winnipeg Jets, 4-2. Vegas would bounce back to win each game afterwards, defeating Winnipeg 3-1 in Game 2, 4-2 in Game 3, 3-2 in Game 4 and 2-1 in Game 5. This made them the only team ever to advance to the Stanley Cup Finals in its inaugural NHL season when the league’s expansion did not require a newly admitted team to make it to the Stanley Cup Finals, which happened last during the 1967-68 season.

Keep in mind that the majority of Vegas’ players were castaways — players left unprotected by their former clubs and allowed to be drafted. Some players were draftees. Gallant was a head coach that had been out of the NHL since 2014, when he was fired from the Panthers. McPhee was fired as the Capitals general manager in April 2014. Now all of them have a chance to make the impossible happen. They can become 2017-18 Stanley Cup Finals Champions if they defeat the Capitals in this series, becoming the first expansion franchise to win a title.