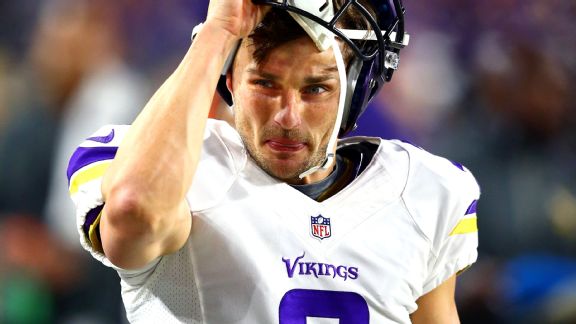 The Minnesota Vikings have decided to release kicker Blair Walsh. after missing an extra point that could have tied or won the game for the Vikings. Walsh leads the league with four missed extra points and the Vikings saw enough.  Walsh has not been the same kicker since missing a critical field goal versus the Seahawks in wild-card weekend of the playoffs. Coming into this season, Walsh received a shocking four-year contract extension that was $13million, which was a surprise to some. Minnesota is on a four-game skid and are tied with the Detroit Lions for first place in their division.  Coach Zimmer, as well as the organization, has not released any information about the kickers who will replace Walsh. After working out six kickers, the organization made a decision to sign Kai Forbath.

“Being in the NFL, you’ve got to make kicks,” Walsh said. “That’s part of your job.”

Walsh was 15-for-19 on extra points and 12-for-16 on field goals but missed key field goals or extra points when the Vikings needed them. In his career, he was 133-for-158. Before the decision was made to release him Vikings head coach Mike Zimmer supported Walsh. “At some point in time you have belief and confidence in guys because you know what they’ve done in the past,” Zimmer said when asked about his ongoing dilemma with trying to support Walsh while judging what’s best for the team. “We’ve missed three extra points this year.”We’ve missed several field goals.

“The way our games are being played, they’re going to come down to a lot of close games. We have to look at all avenues as far as what gives us the best opportunity to win football games.”