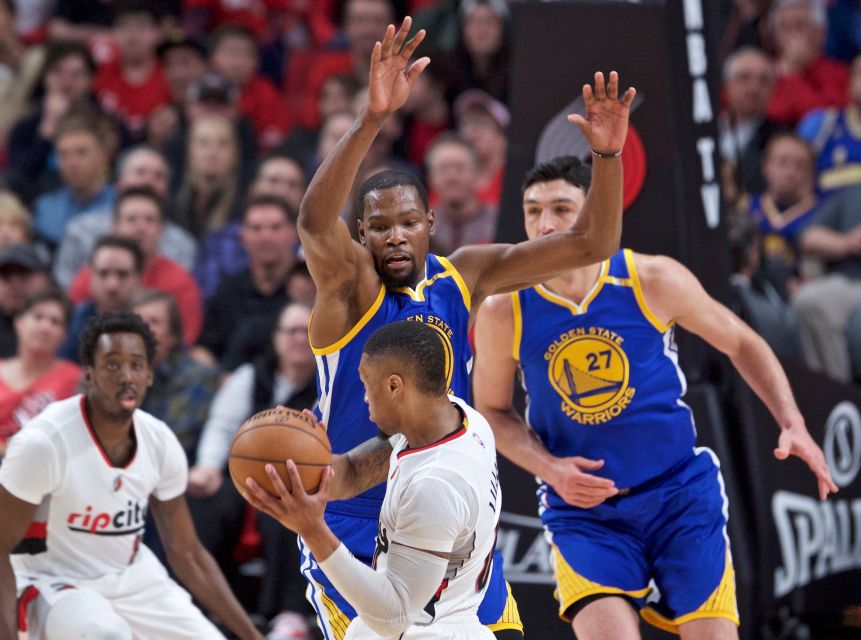 Golden State looked to complete the sweep of Portland in Game Four of the first round of the NBA Playoffs. Without head coach Steve Kerr for the second game in a row, Mike Brown once again took over as acting head coach. Portland looked to take stay alive as it was a win or go home game in their own stadium.

With Kevin Durant back in the lineup, the Warriors looked unstoppable to start the game. They scored 14 straight points before Portland could even get on the board. The Warriors shot 75% from the field in the first. Golden State’s 45 points tied the postseason record for points in a first quarter as they lead by 23.

The Blazers played better basketball all-around in the second. However, they still could not get themselves back in the game. C.J. McCollum struggled in the first half as he went 0-7. The only production coming from Portland was Damian Lillard. He and Steph Curry led all scorers with 21 at the half.

Steph Curry continued to light it up and help the Warriors keep a strong lead. He finished the third with 37 points, shooting 7-11 from behind the arc. Portland found themselves in a 26-point hump as Aminu and Lillard were the only two Blazers to score in double digits through three. Although Portland was behind, crazier things have happened in the NBA.

The blowout continued through the fourth as the Warriors continued to dominate the game. It seemed that once they got ahead, they never looked back. The Blazers looked incapable of overcoming the huge deficit. Lillard with 34 and Aminu with 25, were the only contributing factors as McCollum couldn’t get going, finishing the game with six.

With the 128-103 win in Game Four, the Warriors swept the Trail Blazers to advance them to Round Two of the NBA Playoffs. Golden State had six players in double digit points, all five starters included. Portland fell behind early and ultimately never got themselves back in. The winner of the Clippers and Jazz series will play the Warriors in the second round of the NBA Playoffs.