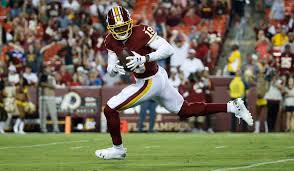 The Washington Redskins come into the 2019-2020 season with fresh and exciting young talent.   Within most of the position battles, there is a plethora of ability, speed, and skill. However, there are so many questions:

Redskins head coach Jay Gruden, position coaches, and front office will have some difficult decision to make.  The team must cut their roster down to 53 players before, Saturday, August 31, 2019 at 4:00 p.m. EDT. So, let’s make some predictions starting with the quarterbacks.

There was a lot of smoke on whether Josh Doctson would make the team.  Doctson had a good camp. He hasn’t played a lot in the preseason which typically means that he has a roster spot.  To add to theory that he’s safe, he played and started in the dress rehearsal preseason game against the Atlanta Falcons.  Third-round pick Terry Mclaurin is a lock to make the team. He’s had an excellent camp, and many believe that he may be the Redskins best wide receiver.  Trey Quinn has been penciled in, by Gruden, as the team’s slot receiver. Paul Richardson will probably play the X or Z receiver position, alongside Doctson.  Now, here is where it gets tricky. Rookie Kelvin Harmon, Robert Davis Jr., and Cam Sims have been battling for the remaining wide receiver spots.

Davis Jr. has been the team’s most explosive receiver in the preseason.  In four games, Davis had 115 receiving yards with two touchdowns. Davis had two big play touchdowns in the preseason—a 55-yard and 46-yard play.  He’s shown the ability to play special teams by recovering two fumbles on punts—both against the Falcons. Sims and Harmon have shown ability but aren’t safe by any stretch of the imagination.

In the final preseason game against the Baltimore Ravens, Sims dropped multiple passes and just didn’t look sure of himself.   Maybe the pressure of making the team got to him, but the talent is there. After the 20-7 loss to the Ravens, even with the dropped passes, Gruden wouldn’t let Sims struggles cloud his judgment by stating “overall, Cam’s had a strong camp.”  As for Harmon, Gruden has been happy with Harmon’s work in organized team activities and training camp.

Wide Receiver Steven Sims Jr. has been a guy that many have been impressed with, in camp.  He seems to be a playmaking receiver and special teams returner. In the game against the Ravens, Sims Jr. had a touchdown catch, two kick returns for a total of 80 yards (41 and 39-yard returns).  After the game, Gruden said that “it’s fun to watch [Sims Jr.]; every time he gets the ball in his hands it’s exciting.” It’s going to be a tough decision for coach Gruden because Sims Jr. did not make it easy.  However, with Mclaurin having the ability to back up Quinn at slot receiver, it gives Gruden away to not factor in Sims Jr. on the 53-man roster. Quinn can also handle punt and kickoff return duties. Sims Jr. should be able to sneak on to the practice squad.  The wide receiver competition will be a debatable one, all the way to Saturday at 4 p.m.

Adrian Peterson, Derrius Guice, and Chris Thompson are locks.  There is no need to talk about them. This competition comes down Byron Marshall and Samaje Perine.  This comes down to who can backup Peterson or Guice if either gets hurt. If that happens, Perine is a better fit as a physical back to spell Peterson or Guice.  If this team is looking for a backup 3rd down back for Thompson, Guice could possibly fill that role.  Marshall falls short as a natural running back. This is a close competition, but the edge goes to Perine.

There is no surprise here.  The team is hoping for Jordan Reed to play week 1 against the Philadelphia Eagles.   Reed is in concussion protocol after a nasty hit involving Falcons safety Keanu Neal.  If he can’t play, Vernon Davis will need to step up. However, Jeremy Sprinkle has played well in camp and preseason.  He looks like he’s ready to take on a bigger role.

With the hold out of All-Pro left tackle Trent William, the offensive line has become a real weakness for the team.  Donald Penn has been serviceable for Williams, but not spectacular. In addition, second-year player Geron Christian Sr. just isn’t ready to be a starting left tackle.   Ereck Flowers at left guard could be an adventure. However, Flowers has improved but it just seems that the rookie Wes Martin will be the left guard eventually. There is a lot of versatility inside on the O-line.  Tony Bergstrom and rookie Ross Pierschbacher can play center and guard. This helps limit the O-line numbers for potential roster moves. Also, Flowers could attempt to play tackle, if either of the tackles goes down during a game.

This is the team’s strongest unit.   Jonathan Allen, Daron Payne and Matt Ioannidis could possibly be the best trio on a defensive line in football.  They will benefit more with the expanded roles of Tim Settle and Caleb Brantley. Settle may make a name for himself in 2019.  He has starter ability.

The combination of Ryan Kerrigan and rookie Montez Sweat could give quarterbacks nightmares.  Kerrigan has been a consistent performer. Over his eight seasons in the league, Kerrigan has averaged 10.5 sacks per season.   Sweat has all of the physical tools to become an elite pass rusher—speed, power, and wingspan (84 ¾ “). Cassanova McKinzy provides speed from the outside and the bend to be an effective 3rd down pass rusher.  He is in concussion protocol, but this shouldn’t hurt his roster spot.

Opposite from prior seasons, the inside linebacker unit has speed.  Jon Bostic, coming to this team after Reuben Foster went down with a torn ACL, has been a big acquisition.  He has shown leadership and smarts to get the defensive line and linebackers in the right position. Shaun Dion Hamilton showed flashes after being inserted to the starting unit last season.  He is fast with great instincts. The rookie Cole Holcomb has showed out in camp. Holcomb is a tackling machine with sideline-to-sideline speed. If Hamilton, slips up Holcomb is ready to snatch his spot as a starter.  Josh-Harvey Clemons will be involved in nickel and dime packages. He has put on weight and looks ready to ascend. He can cover and is a good blitzer.

The Redskins have ballhawks at cornerback.  Media darling and rookie Jimmy Moreland has shown to have a knack to create turnovers.  He is fearless and could push Quinton Dunbar for his starting spot, alongside Norman. This is the deepest unit on the team with a lot of ballers.  Dominique Rodgers-Cromartie aka the DRC, brings value to this unit because of his ability to make plays. He could possibly play some free safety if needed. His knowledge and versatility could be big for this team down the road.

New acquisition Landon Collins and Montae Nicholson are penciled in as the starters.  Collins’ backup Deshazor Everett, is a solid option if Collins has an injury. However, there is a major question at the backup free safety spot.  Is Troy Apke serviceable enough to spell Nicholson if he gets hurt? By the looks of preseason and training camp, the answer would be no. Apke has the speed and physical tools, but he seems to lack the instincts and awareness to play safety.  Apke’s limitations have opened the door for Jeremy Reaves to make this team. Reaves has been solid in camp and preseason games. He looks the part and if Nicholson went down, he could be a very serviceable option.