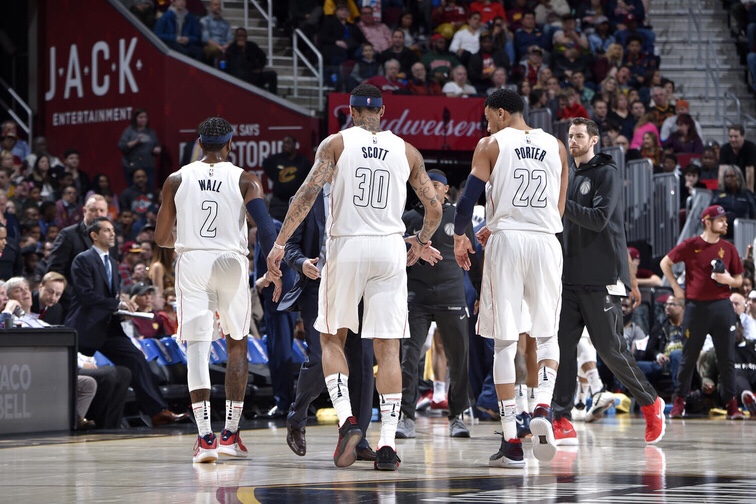 The Washington Wizards went to Cleveland to take on the Cavaliers for the final time this season. The Wizards had lost 11 of their last 17 games and were looking to turn that streak around tonight.

CLEVELAND — In the first quarter, the Wizards gave up 39 points while Bradley Beal was held scoreless. Washington was being destroyed by Cleveland’s three-point shooting giving up 8 first half makes from behind the arc.

The one bright spot in the first half was John Wall who had 10 points, 6 assists, and 2 steals. He kept the Wizards in the game even through the 39-point first quarter. Wall also shot 6/6 from the free throw line, while the Wizards as a whole shot 12/14.

The Wizards were once down 13 and their defense was non-existent. The third quarter saw the Wizards take over and put up 36 points taking a 7-point lead into the fourth quarter. By the end of the quarter, John Wall was looking like his pre-injury self with 13 assists in 3 quarters and the Wizards defense began to show life as well, creating turnovers and limiting Cleveland’s high-powered offense to 23 points in the third.

The beginning of the fourth quarter saw Washington continue to play great defense, led by Kelly Oubre. Oubre was in the passing lanes and simply causing problems as an on-ball defender. The Wizards jumped out to a 104-87 lead with just 7 minutes remaining.
Then the tide started to turn. Washington scored was outscored 32-11 in the final 7 minutes as Lebron James put on a show in the fourth. James torched the Wizards for 13 points in the final 6 minutes of the fourth quarter, sparking Cleveland’s unimaginable turnaround. In the final minute of the game, John Wall missed a shot that would have given the Wizards the lead and then turned the ball over on Washington’s final possession, sealing the victory for Cleveland.
Washington already has a playoff spot but every game matters in terms of seeding going forward.

The Milwaukee Bucks also lost Thursday so they remain tied with Washington (Wizards hold the tiebreaker). The Wizards can still fight for the 6th seed, however, they will matchup against Cleveland if they get it versus potentially being matched up with a hobbled Celtics team who just lost Kyrie Irving for the year if they do not.
The Wizards next game is April 6th at home versus the Atlanta Hawks. Hopefully, they can use this game as a boost to get ready for the playoffs which are right around the corner.