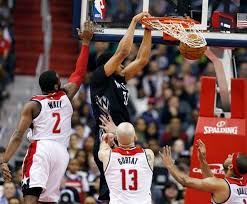 After winning four straight, the Washington Wizards ended their five-game west coast road trip with a loss to the Minnesota Timberwolves.

Coming off a controversial game-winner, Washington started the game off sloppy with three straight turnovers. Minnesota took advantage by going on a 9-3 run.  The Wizards have started games carelessly on this west coast trip and then play catchup.  This game was looking no different as Washington was outscored 41-23 in the first quarter.  They overcame two straight games where they were down by 17 for more.  Tonight, they would have to do it for the third time in four nights.

The Wizards started the second quarter on a 9-4 run with more aggressiveness.  Ricky Rubio was feeling generous as he had 10 assists in the first 12 minutes.  Washington could not block his court vision.  For the first time all season, the bench actually outscored the starters in the first 16 minutes of the game.  The bench brought the lead down in the second quarter but could not contain it for long.  Scott Brooks reverted back to his starters who kept Washington in it.  The starters cut Minnesota lead down to eight points at halftime after being down 21.

These two teams battled back and forth throughout the third quarter.  No matter how many times Washington attempted a comeback, Minnesota came right back with an answer.  Washington cut the lead down to six points at the start of the third.  However, the Timberwolves did not let them get any closer.  Ricky Rubio continued to find teammates with 16 assists through three-quarters.  The starters must have jet lag as they continue to struggle.  John Wall and Bradley Beal were the only players in double-figure scoring after the third.  Bojan Bogdanovic continues to provide a spark off the bench as the only other player in double-figure scoring.

Going into the fourth, Washington needed to repeat what they did the previous two games.   Finish off strong to make up for a weak start.  This time the Wizards could not get the job done.  The Timberwolves home court advantage gave them the energy they needed.  Washington never led Minnesota the entire game, despite them cutting the lead down to five points.

Wall and Beal combined for 47 points while the other starters combined 29 points.  Rubio finished the game with 22 points and 19 assists.  Karl Anthony-Towns finished with 39 points and 13 rebounds after getting into foul trouble early.

Although the Wizards did not finish their road trip undefeated, the good news is they return home Wednesday to face the Dallas Mavericks.  Washington has only lost nine since the start of the year, with Dallas being one of those teams.  Since that lost in Dallas, Washington has gone 25-7.  They also have added key pieces to their bench in Bogdanovic, Brandon Jennings and Ian Mahinmi is healthy.  Dallas is only three games back of the Denver Nuggets for the eight spot in the West.

With the loss to Minnesota, Washington has dropped back down to the third spot in the East.  So this is a big game for both teams.  The Wizards have won seven of their last nine games and have been playing well.  They are 11-3 at home since the new year and have a revenge game on their hands.  With Washington coming off a tough loss and coming back home for the first time in a week, they should have some momentum on their hands.  If the Wizards come off strong and not play catch up, they should defeat Dallas easily.  However, they have struggled with mediocre teams before so they should not take this opportunity for granted.