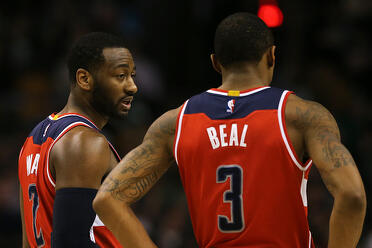 Boston, Massachusetts— In life, we are in control of our own destiny. The same can be said for the Washington Wizards. Their accomplishments, this season from the start of the new year, is well respected. However, they found themselves regressing and retaining unacceptable habits which caused them to be mediocre. Lack of defense and offensive droughts happening simultaneously; shadowing over the successes of this team.

A prime example would be tonight in Boston. The Wizards only had to be competitive and win because the stakes were high. They did neither. Boston took the lead in the first quarter and never looked back. Another subpar performance by the Wizards, begging the question; how can they turn things around as every game is shaping the playoffs picture?

Kelly Oubre confirmed what many already knew to be fact. The Wizards become lackadaisical, perhaps even bored at times. Everything is easy and then that’s when they start to forget the fundementals. Take care of the ball. Guard your opponent and don’t rely on help defensive. Most importantly, play for a full 48 minutes.

“I think we kinda got lackadaisical because we think it’s too easy,” said Oubre.

These things are crucial; especially when as a whole the team is struggling to knock down shots. Shooting woes are apart of the game. John Wall can attest to this. He shot 4/10 from the field tonight and had 16 points. Wall is in agreement that the issue is defense. Plain and simple.

“When you not making shots; you gotta do a better job at defending,” said Wall.

"When you not making shots you gotta do a better job at defending." @1340AMFOXSports pic.twitter.com/WRadybHdr7

The message has now become redundant. The Wizards know what they need to do; now it’s a matter of excuting and implementing it into their game plan. Perhaps, losing one of the most meaningful games of the season will shed light on this ongoing problem. If the Wizards want to be the “dark horse” in the playoffs these trivial errors must cease.

The State of the Wizards;

Adversity can either bring a team together or divide them. According to Bradley Beal, despite losing in Boston, this Wizards team is still positive.

“We good....(still positive)…..We still like each other,” said Beal when asked about the state of the locker room.

Bradley Beal on the state of the locker room right now #WizCeltics pic.twitter.com/0NlmAents3

Regardless of the melancholy atmosphere in the locker room. The Wizards can be optimistic about their future. This game didn’t make or break their playoffs hopes. However, it was a wake-up call. This team has excelled on so many levels that it’s starting to hinder itself from succeeding.  A reality check, right before the post-season, is exactly what Washington needs. If they continue with this complacent mindset rest assure that this post-season will be short lived. Washington has the talent to make it to the Eastern Conference Championship. If they fail to do so; it would be because they couldn’t. It would solely been because they didn’t put forth the effort.

That’s the difference between teams that are championship contenders, and teams that are mediocre. The Wizards must decide who they are and what they want to accomplish. This responsibility lays at the feet of Wall and Beal. As leaders they stir this team in the right direction, ensuring everyone else on board. Time is of the essence and the Wizards must refocus, sooner than later.