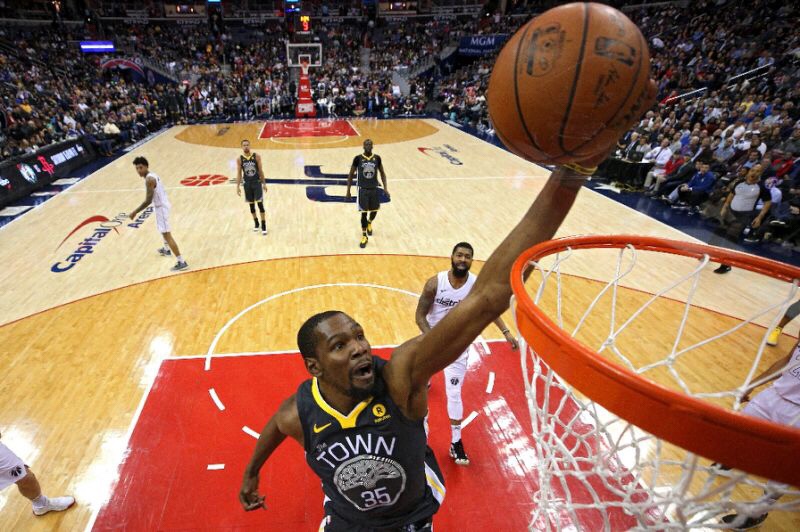 “A Tale of Two Halves,” pretty much sums up the results of Washington’s performance against the Golden State Warriors on Wednesday night. For Golden State, this tale ended in a Cinderella ending for D.C native Kevin Durant who had a special 32 point homecoming in this 109-101 victory. On the contrary for the Wizards, they did not receive the glass slipper at the end of the 109-101 defeat.

Chapter 1, in “A Tale of Two Halves,” consisted of 5 turnovers for the Washington Wizards that converted to 11 points for the Warriors. Bradley Beal, who would usually lead his team in scoring with 23 points, couldn’t find his mojo shooting 0-4 from the field. Luckily Otto Porter Jr., was able to cover the offensive responsibility during Beal’s absence shooting 66% from the field with 11 points.

Mike Scott and Jodie Meeks made their mark on the pages in this chapter who both combined for 9 points. The most impressive part of their game was their ability to get back on transition defense and make some stops. Most importantly, the Wizards dropped three’s when it mattered to minimize the Warriors’ lead to 58-56.

Coming into this game, the Warriors have outscored their opponents by atleast 20 points in the third quarter seven times this season. Washington wasn’t outscored by 20 points but they were held to 28% shooting from the field and combined for seven turnovers. Golden State’s ability to make adjustments coming out of the half is what turned this game completely around for the Washington Wizards.

At this point, as per usual, the Wizards were playing a game of tag with the Warriors and the proper adjustments Golden State made after halftime carried on into the fourth quarter allowing them to head home with a 109-101 victory.

Washington should feel pretty proud about this game against Golden State. Even though leading scorer Bradley Beal was limited to 8 points, the depth in this team was completely transparent and everyone contributed. Just imagine if Bradley’s mojo in Milwaukee would’ve carried on into the plane with him to Washington, D.C., the outcome of this game may have been different.

A point of exposure for this Washington team is at their center position. The Wiz gave up 42 points in the paint and that’s ultimately because of their lack of depth at center. In a perfect world their roster would have the likes of your Karreem Abdul Jabaar’s or Bill Russell’s but Marcin Gortat hasn’t been able to contest physically and dominate in one on one matchups.

Another obvious point of exposure occurred with John Wall on the bench. Bradley shot 3-15 from the field  and wouldn’t it have been nice have a guy who averages 19 points a game?