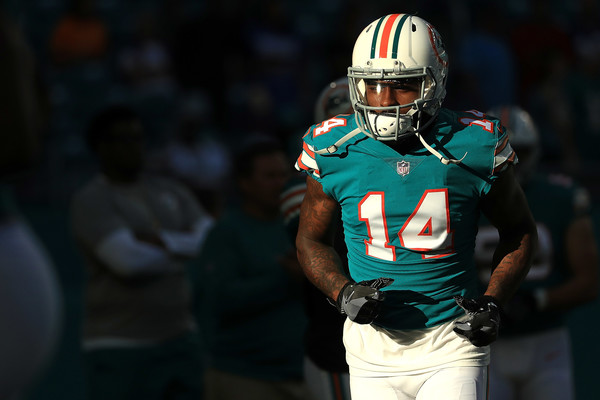 It’s the beginning of the offseason, which means a familiar conversation is dominating the message boards of fans of the Baltimore Ravens across the Internet: who will the front office bring in at wide receiver?

This franchise has been starved of a legitimate home-grown wide receiver threat since its inception. The Ravens famously stumbled onto two Hall of Famers with its first two draft picks. This led to a well-deserved reputation of a team who just seems to understand how and who to draft year after year.

When you look at the list of players the 22-year-old franchise has draft in the first round, you can comfortably classify at least 14 players as elite-level talent when healthy. Those players have come in the form of linebacker, offensive line, defensive back, defensive line, and running back. Yet none of these first round talents have come at the wide receiver position.

The Baltimore Ravens have taken three wide receivers in the first round since 1996. And unfortunately for the Ravens, the picks have dropped off in production each time:

However, the Ravens have found a way to offset their laughable effort at drafting wide receivers. Year after year, they find veteran stop-gap solutions at the position to barely keep the passing attack above water. When using the phrase “barely above water,” it means the passing attack’s nose barely rises a centimeter above surface level at its most effective.

Respected veterans like Derrick Mason, Anquan Boldin and Steve Smith have joined the Ravens on the back nine of their careers, only to provide a slight jolt to a passing attack that has always lacked young energy at receiver. However, the Ravens have a chance to address the persistent issue this offseason.

The Miami Dolphins wide receiver is neither big, nor fast. Neither quick, nor agile. Despite averaging a 100 catches a season since entering the league, many will point to the fact that many of his touches with the Dolphins have been manufactured behind or at the line of scrimmage. All those factors may be true, but there is one trait that the Ravens can certainly make the most of: he is a football player.

Obviously, Landry puts on his pads one shoulder at a time, just like every other NFL player.  However, he is not a diva unlike most of his contemporaries. He embraces making the tough catch. He does not fear the physicality of the game. And most importantly, he wants to win.

The top three wide receivers in Ravens franchise history have one thing in common: they are all warriors. They are all football players.

Mason, while not the most physically imposing wide receiver, was as tough as they get at the position. In 2008, Mason separated his shoulder against the New York Giants and still finished the game with seven catches for 82 yards. The ever-so dependent receiver re-aggravated the injury just five weeks later against the Dallas Cowboys and finished with a respectable 6 catches for 66 yards and one touchdown.

Boldin, known for his physicality, is solely responsible for the Ravens’ second Super Bowl ring. Quarterback Joe Flacco rightfully gets the praise for going 11 TD and zero INT in that playoff run, but anyone who closely watched those playoffs saw the big-armed QB repeatedly toss passes to the most physically dominant receiver in Ravens franchise history.

And finally Steve Smith. While his stay in Baltimore was just a blip on the radar, he provided much needed leadership to a franchise that was in transition following the retirement of Ray Lewis. He provided the classic Ravens attitude during a time where the very trait the franchise was built on was absent.

When you take the route-running savvy, and dependability of Mason; the sheer physicality and hands of Boldin; and the attitude and nastiness of a Smith, you get Landry.

But why would the Ravens give up valuable assets for a disgruntled wide receiver when they could be in prime position to draft a young stud at #16 in this upcoming draft?

The most popular pick for the Ravens in the 2018 draft has been Alabama wide receiver Calvin Ridley. It’s easy to see why. He’s blazing fast, runs crisp routes and consistently catches with his hands. Any team in the NFL would be lucky to have a player like Ridley. He is certainly worth a first round pick, but so is Jarvis Landry at this point in his career.

Despite the Dolphins franchise tagging Landry, the team is still looking for the right trade to get him off their salary cap. The Baltimore Ravens need to do everything they can to make sure he ends up in Charm City, even if it means giving up a first rounder.

Ridley is coming out of college at the ripe age of 23 years old. Landry is four successful years into the NFL at just 25 years old. He catches better than Ridley, he’s more physical than Ridley and he is arguably just as good of a route runner. The only trait where Ridley has clearly got Jarvis beaten is speed. But how well has speed at wide receiver served the Ravens?

They drafted Torrey Smith in the second round because of his speed and quickly realized it did not translate to #1 receiver potential. However, he still had quite a bit of success with the team. They drafted an even faster player in Perriman and found his lackluster hands and route running are a real problem when playing receiver.

Calvin Ridley is way more polished than those aforementioned guys were coming out of college. But at the end of the day, the Ravens have to tend to their highest paid asset: Flacco. The up-and-down quarterback simply has not worked well with speed receivers since he was drafted. He works well with reliable, physical, nasty hand-catchers like Boldin, Smith and Mason. Flacco’s numbers have taken a significant hit when all he has to throw to is a cast of inconsistent pass catchers who rely solely on speed.

He started off his career in steady fashion with Mason as his leading receiver. His second best season was in 2010 season when he threw 25 touchdowns to just 10 interceptions. That receiving core was headlined by veterans Boldin, Mason and T.J. Houshmandzadeh. A severe lack of speed, but a whole lot of pass catching ability and route running. His career best season in 2014 was highlighted by the play of Smith, Owen Daniels sprinkled in with the big plays of Smith.

In Flacco’s best years, his number one receiver may have lacked in speed, but more than made up for it in catching and route running. That is why the Ravens need a receiver like Jarvis Landry. If it takes giving up a first and a fourth: go get him. He’s not much older than the receivers coming at age 25. And most importantly, he plays with the exact dependably physical style that Flacco has excelled with.

In Latin, the name Jarvis means “he who is skilled with a spear.” Landry’s style of play paired with Flacco’s natural preference for physical receivers makes him the perfect option to spearhead the Ravens’ passing attack in 2018. The Dolphins are putting him up for grabs, and the Ravens need to find a way to pluck him out of the air while the opportunity is still there.