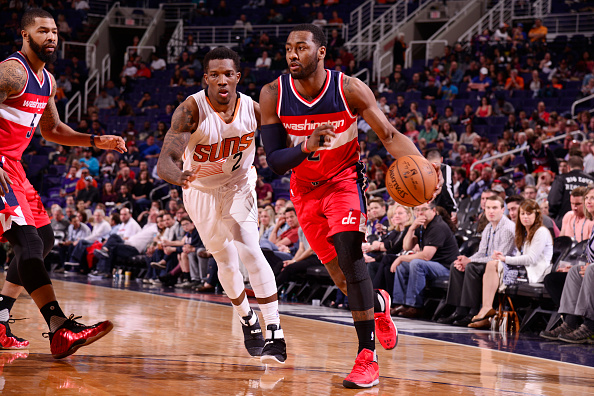 Working hard? Or hardly working? Two rhetorical questions that Wizards should ask themselves after they defeated the Suns to open their West Coast road trip. This game was all over the spectrum; from one extreme to another. Ejections, technical fouls, and lead changes all made this late night game worth staying up for. At the same time, despite winning, the Wizards know they must return to their defensive nature and not become lackadaisical when they have a huge lead. There were so many moving parts to this match-up between the Suns and the Wizards. Head Coach Scott Brooks compared it to an ABA game.

Wizards Dominance in the First Quarter:

Wizards outscored the Suns in the first quarter 38-25, led by Bradley Beal with 15 points. Beal would end the first shooting 6/7 from the field. Wizards couldn’t complain about not getting fouls, considering they had 17 free throw attempts opposed to the Suns’ six. Wizards’ second unit also came to play in the first as they had a combined 15 points, whereas the Suns’ only had one player off the bench who scored seven points, Alan Williams.

Not a bad pick from Jason Smith, but Jared Dudley's belly-bump head-butt & for some reason Brandon Jennings' finger-guns. pic.twitter.com/BCjUWynPEN

Washington was in full control until a pick by Jason Smith became more than it should have. Former Wizard player, Jared Dudley, would walk directly towards Smith and chest bumped him and headbutted him as well. The two teams would have to be separated and Brandon Jennings would be seen making a finger pointing gesture. Jennings would talk with Candance Buckner of the Washington Post exclusively about that moment.

Asked Brandon Jennings what explanation by refs he was given for his ejection. Also, Jennings details his intention. pic.twitter.com/QZ24kd05Fo

Subsequently, both players were ejected from the game and that gave the Suns the momentum they needed to not only make this game competitive but to regain the lead. The Wizards would find themselves down 11, despite being up by 21 points at one point. Bradley Beal admitted post game that they got too comfortable and took the bait from this chippy Suns team.

Last night Bradley Beal spoke about the Suns being chippy and how the Wizards must return to their defensive form pic.twitter.com/cOwN6N2swt

Winning this game was simply contingent upon who would make that last run. The Wizards did that. Despite the Suns shooting 50% from the field, 48% from downtown; it wasn’t enough to pull away from Washington. Eric Bledsoe had his way with the Wizards’ defense and finished the night with 30 points. Devin Booker would make things interesting late in the 4th as he scored 25 on the night but nine points in the final moments of the game. The Wizards managed to win this game and John Wall says moving forward they can’t give up leads like they did last night.

“We made the game tougher than what we {were} supposed to. I’m just glad we came out with the win,” Wall said.

John Wall last night "We made the game tougher than what we was suppose to. I'm just glad we came out with the win." @1340AMFOXSports pic.twitter.com/Jy8oaASGvy

John Wall thoughts on Bogan and his impact on the team pic.twitter.com/QLh7fNB7Pb

Bradley Beal finished the night with 27 points and Wall would have 25, 10 of which came in the fourth quarter. Wizards’ second unit showed up. Bojan Bogdanovic 29 points and was 5/9 from the field. The bench collectively had 65 of the 131 points which are roughly half of the team’s points. The are playing tonight in Denver, Colorado vs the Nuggets at 9pm/ET.