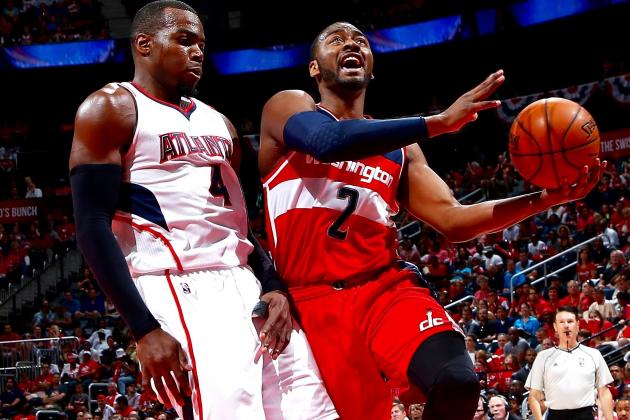 The Washington Wizards take a 2-0 series lead after a 109-101 over the Atlanta Hawks Wednesday night.

Wizards Start Where They Left Off

After a slow start, the home crowd got Washington back in the game.  Following a 6-2 run by Atlanta, the Wizards went on a 14-0 run.  This home energy gave them an early 10 point lead.  With 46 seconds left in the first quarter, the Hawks took a one-point lead.  Atlanta carried that one-point lead into the second quarter.  John Wall and Dennis Schroder both had 12 points in the quarter.

In the second quarter, the two teams went back and forth.  Every time Washington gained an edge, Atlanta would come right back with an answer.  The Wizards made the first basket of the quarter to take the lead.  After taking the lead, they did not trail the rest of the quarter.  The Wizards held the Hawks to 19 points with great defense.  They went into halftime with an eight-point lead.

The second half did not go in the Wizards favor to begin.  Markieff Morris and Otto Porter Jr. both picked up their fourth fouls early in the quarter.  This forced Washington put their bench in early. Kelly Oubre Jr. and Jason Smith were not far behind as they picked up their fourth foul as well too.    This led to a thunderous “refs you suck” from the Washington D.C. crowd throughout the quarter.  With the Hawks gaining momentum, they took the lead with 4:42 left in the quarter.  Behind Paul Milsap’s 14 points in the quarter, the Hawks kept the lead. They went into the fourth quarter with a 78-74 lead.

Brandon Jennings scored six straight points and gave the game-tying assist to Smith with about eight minutes left.  Following this, the game went back and forth down to the wire.  Porter came up with a big steal that led to a Wall dunk.  This fastbreak bucket gave Washington a five-point lead with 1:05 left in the game.  With 38 seconds left in the game, Bradley Beal hit a three-pointer to give Washington an eight-point lead.  This was the nail in the coffin to give the Wizards a 2-0 series lead heading into Game 3 in Atlanta.