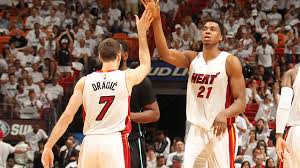 With three starters resting, the Washington Wizards fell to the Miami Heat for the fourth time this season 110-102.

With the playoffs starting this weekend and Washington locked in at the fourth seed, Washington rested John Wall, Bradley Beal, and Markieff Morris.  Although they were missing starters, the Wizards came out strong.  Miami needed a win and some other teams to lose to get a playoff spot.  Washington never trailed the entire first quarter and outscored the Heat 27-23.  Marcin Gortat led the way with 10 points in the first quarter.

The second quarter was a different story with Miami knowing what was on the line.  They started the quarter on a 17-9 and took an early four-point lead.  It got worst as Miami went up by as much as 11 points.  Despite the Heat putting up 33 points in the second, Washington only trailed by six going into halftime.  After missing two games, Otto Porter, Jr. returned to action with 11 points and six rebounds at the half.  The bench had 23 points between four players at halftime.  Gortat led them with 12 points.  For the Heat, Hassan Whiteside had 14 points, 12 rebounds and two blocks at halftime.

Goran Dragic finished the game with 28 points, five assists, and four rebounds.  Whiteside owned the paint with 24 points, 18 rebounds and two blocks.  Miami had the Wizards number this year sweeping the season series 4-0.