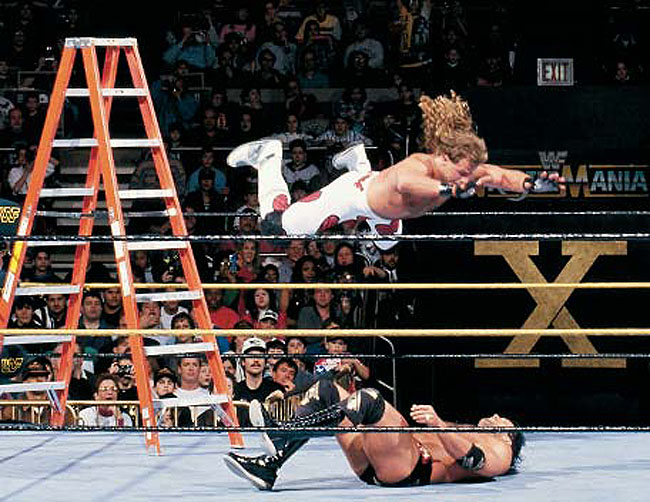 The company was embroiled in a controversial steroid trial. Ted Turner’s WCW brand started to fill their roster with the best WWE legends and international superstars. And the WWE product started to get a little on the childish side.

But luckily for the McMahon brand, WrestleMania 10 was the best show of the year. Their best show was on their biggest stage of the year, very clutch.

23 years ago on March 20th, WrestleMania 10 was held at Madison Square Garden in New York City. 18,065 people packed into MSG to enjoy a show that was “Ten Years in the Making”. But this MSG show was a little different. It marked the first WrestleMania that didn’t feature Hulk Hogan. Vince McMahon had to rely on the “New Generation” to produce a high-quality show during a time when the company really needed it.

Owen Hart vs Bret Hart: To this date, the best opening to any WrestleMania. We all knew that Bret Hart was great at what he did, but Owen Hart really established himself on this night. His 20-minute clinic with his brother Bret was amazing. Picking up the win really boosted him as he started his successful singles run with the company.

Randy Savage’s Last WM Appearance: Randy Savage made his last WM appearance at this show. His match was forgettable but watching the Macho Man walk into MSG was purely amazing. Unfortunately, 1994 was the last year that the Macho Man appeared in person on WWE TV.

Lex Luger’s Loss: Lex Luger turning into the next Hulk Hogan failed, and it worked out good for the company. At the 1994 Royal Rumble, Hart and Luger were co-winners of the match. Which meant that both winners would get a match vs the Champion at WM 10. This happened because the heads of the company were torn between the two. This loss served as an indication of how the company would go into the future.

Bret Hart’s Title Win: Bret Hart became the top guy on this night. It was the first time in recent memory that Vince McMahon depended on a pure technical wrestler to lead his company. Hart’s win over Yokozuna was perfect booking. During his loss to his brother earlier in the night, he was injured. Despite the odds, his title win set the tone for his run at the top.

Intercontinental Title Ladder Match: For all of the true wrestling fans out there, Dave Meltzer did not give a 5-star rating to Bret vs Owen that night. He gave it to Shawn Michaels vs Razor Ramon. This match was the first true time that a ladder match was presented to an international audience. Both men sold the storyline well and truly exposed some ladder match tactics that we still see today.

Overall, this WM was really good for the weak roster that Vince had at the time. It was a sign of strength. And a sign that Vince would be well off without Hulk Hogan (well that took him some time but he still made his point).

Compared to other shows during 1994, WrestleMania 10 was a diamond in the rough. It accounted over 400,000 PPV buys. The most for any WWE PPV until 1998. Fans look back on this as the shining moment for a very tough 1994 campaign for the company. That is the lasting impact of this show. Smart minds and gifted wrestlers putting together a show that surprisingly was the best show that the WWE produced for a while.

As a fan that started watching wrestling during the Ruthless Aggression era (2002-2008), there’s one main difference in this show and that era that I don’t see today; Major TV events at Madison Square Garden. It’s been over five years that a PPV has been held at MSG. I always hear superstars talking about the building but I never see important shows held in there anymore. Brooklyn’s Barclays Center is WWE’s newest  New York option. However, send some PPV’s back to MSG. Make some new history in a place filled with WWE history.