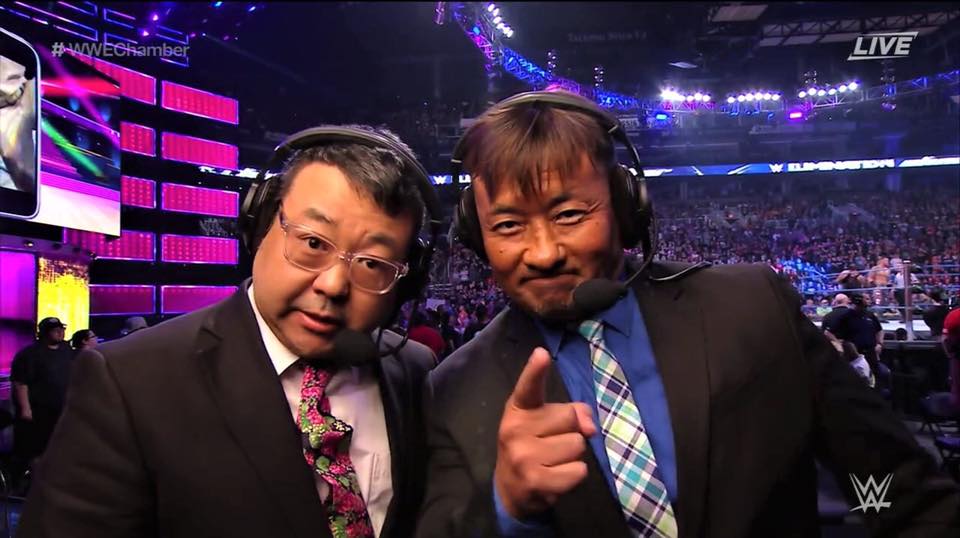 “Do you have your camera? Can you go to Madison Square Garden? I think Bob Backlund is going to drop the strap?!” to which the very eager and enthusiastic Shun Yamaguchi replied, “Sure! Tell me what to do and how to get access.”

Thereafter Yamaguchi’s break, he then covered many major NWA and WCW live shows, coupled alongside early UFC events which were headlined by the likes of Royce Gracie, Dan “The Beast” Severn, “The World’s Most Dangerous Man” Ken Shamrock and Don Frye.

Shun Yamaguchi met current WWE Japan Broadcast Team Color Analyst Sho Funaki when Funaki arrived in Boston for WWE WrestleMania 14 in 1998 on a night when the Texas Rattlesnake and the toughest S.O.B ever to lace up boots up in the history of WWE “Stone Cold” Steve Austin ushered in the Austin Era when he defeated “The Heartbreak Kid” Shawn Michaels with a Stone Cold Stunner for the WWE Championship courtesy of boxing icon “Iron” Mike Tyson making the pivotal three count as special guest ring enforcer.

Q: First and foremost Shun, what have been some of your favorite moments thus far in your successful career with WWE?

Everytime (Sho) Funaki and I do the 10-15 second stop during the live events is our favorite moments. I have just started at WWE and to say successful is so too early, maybe after in 20 years I would like to say successful. I am still at a learning stage and getting to know new things and I thank all the production teammates for preparing me and making me look good. If not for them, there’s no success. I was super excited and I guess that showed during the audition. I bring that same excitement and enthusiasm to the (WWE Japan) broadcasting booth. It’s been super fun. Most of the time we call the matches, but sometimes we just talk wrestling history as it helps a lot since he (Sho Funaki) was a wrestler and I ask questions to Funaki as a wrestlers point of view.

Q: Asuka, Shinsuke Nakamura, Hideo Itami, Kairi Sane and Akira Tozawa are among some of the very talented and popular Japanese WWE Superstars. With such a positive influx of Japanese talent in WWE in recent memory, how would you describe WWE’s popularity in Japan since the arrival of the aforementioned WWE superstars?

WWE popularity in Japan has always been there, I believe. I don’t have numbers and since I live here in the US, my honest answer is, “I’m not sure” but this I can say, for instance I’m meeting more people more now who had nothing to do with (professional) wrestling before are posting photos of them taking their kids to WWE live shows in Japan. I met a person at my Japanese chess club, who’s not a wrestling fan but a WWE fan! We talked that we’ve been in the same show in Yokohama a long time ago. WWE fans in Japan I think have big fan base as just WWE fans! Asuka, Shinsuke (Nakamura), Hideo (Itami), (Akira) Tozawa and Kairi (Sane) now is YES. A huge plus to Japanese market. No doubt!

Q: What are your all-time most memorable matches that you have called live as a Broadcast Announcer for the WWE Japanese Broadcast Team?

Not to be corny, but the last show is always my favorite show. WWE Survivor Series 2017 was AWESOME! Shinsuke (Nakamura) vs Jinder (Mahal) was fun to call, especially when (Sho) Funaki started pushing and shoving with the Hindi announcers during the match. I thought that was pretty funny. When Goldberg beat Brock (Lesnar) in like 10 seconds that was like” Whoa”. WWE WrestleMania watching Undertaker leave was also something. But honestly, it’s always the last show I have done was the most memorable to call.

Q: The WWE Universe in Japan is among the most educated and most passionate of all of the nations around the globe. When WWE visits Japan, how would you describe the experience?

I have only been able to see WWE live in Japan several times and seems long time ago. The Japanese fans love to do the WWE experience. The WWE experience is possible in Japan when we visit. The fan want to call out “Yes! Yes!” or “What? What?”. I have seen many matches, but one match from the Japan tour, Triple H vs (Yoshiro) Tajiri is still one of my favorite matches ever. I’ve told Tajiri that before. Even though it was a match especially for Japan tour, I really got appreciation vibe from the sold-out crowd behind my back while shooting ringside and was very proud of everything.

Q: Before we leave Shun, in your opinion which WWE/NXT superstar do you believe will have a breakthrough year in WWE in 2018?

I honestly don’t know. I want Hideo (Itami) to have good year. I have known him since he was working on indie shows in the states 10 years ago. I want Asuka to remain a power in RAW, Shinsuke (Nakamura) to keep up the great work. Climb up is fun, but keeping and sustaining is super important and also fun.