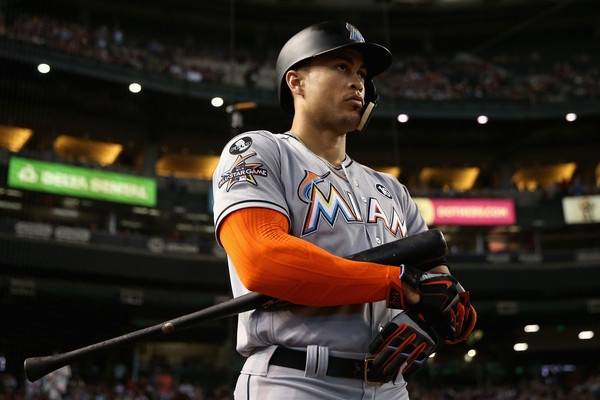 It finally happened. Giancarlo Stanton has finally waived his no-trade clause and is leaving Miami. He will join Aaron Judge and the Yankees in New York.

The Yankees, who were already expected to be a powerhouse in 2018, now add the reigning home run king and have two corner outfielders who hit 111 dingers between the two of them.  Batting practice alone is going to be a must-see event. It will probably be something like this “Hey Giancarlo, bet I can hit the scoreboard first, wanna give it a go?” and then they just launch ball after ball into orbit until game time and then continue to do the same thing.

Now that the Yankees look like the powerhouse favorites of the AL and the two biggest fish are off the market (Japanese phenom Shohei Ohtani signed on Friday with the Los Angeles Angels) what’s next for other contenders and those who missed out on Stanton?

The Red Sox barely took the AL East from New York last year, and with Stanton, the Yankees are now the favorites to take the division. Dave Dombrowski will not sit on his hands and let the Red Sox oldest rivals just run away and leave Boston in the dust. That being said Dombrowski must counter-punch here, and that will probably be in the form of slugger JD Martinez. The free agent outfielder hit 45 home runs last year between Detroit and Arizona and would certainly help a Red Sox team that was 27th in the MLB in home runs last year after being 9th the year before.

The Dodgers were also in talks with Miami to acquire Stanton but clearly, a deal never came together. However, the Dodgers are still favorites to win the World Series and have one of the strongest teams in the game. LA could do nothing and still be just fine. Andre Friedman isn’t one to just sit around idly though, and he will probably turn his eye to upgrading the bullpen and replacing Brandon Morrow.

The Cardinals must feel slighted, as Stanton flat out rejected a trade to St. Louis and refused to play for them. Having missed the playoffs two years in a row the Cardinals are badly looking for upgrades and will probably turn their eyes to either Josh Donaldson or the other Marlin outfielders Christian Yelich and/or Marcell Ozuna via trade. The Cardinals have the pieces to get one or both and that would more than shore up the offense and seriously upgrade the defense. John Mozeliak will be busy this offseason as St. Louis tries to keep up with the rival Cubs.

Another team Stanton rejected a trade to, the Giants must now decide if they want to try and make one more run with the core that won them three championships or blow it up and try to start over. There were rumors that the Giants were pursuing Red Sox center fielder Jackie Bradley Jr but it remains to be seen if that will become anything. Given that Madison Bumgarner, Buster Posey, and Brandon Crawford are still in their primes San Francisco likely chalks their awful 2017 to bad luck and move forward with minor upgrades.

Yes, the Stanton trade does affect the reigning champions. The Astros narrowly beat New York in the ALCS, and with the Yankees adding the reigning MVP they are clearly coming for Houston’s throat. The Astros were closely linked to Padres lefty Brad Hand at the trade deadline and Jeff Luhnhow will likely go for the All-Star reliever again. The ‘Stros also need a replacement for the retired Carlos Beltran and decide if they trust their top prospects like Derek Fisher to provide enough depth.

This is great for the MLB. It promotes greater, more intense competition and puts a generational talent like Stanton on one of the biggest stages. The great thing about baseball is that you can never truly say who is going to win, there are no “super teams” because baseball is so unpredictable and littered with talent across the sport. It’s going to be an exciting 2018 across baseball and especially in the Bronx.