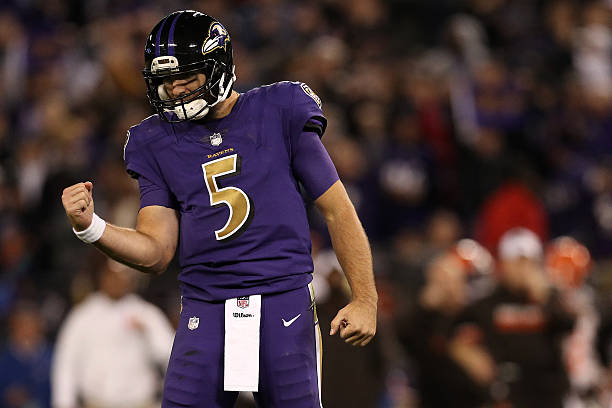 SPOILER ALERT: Joe Flacco is your next NFL Comeback Player of the Year; listen to me now, believe me later.

Call it a bold prediction but this is Joe Flacco’s year to not only quiet the critics; but more importantly end the proverbial “quarterback competition.” I’m ready for the flak that will fly my way if Flacco has another sub-par season; as many expect. However, General Manager Ozzie Newsome has surrounded the 11-year veteran with his best compliment of weapons since 2012’s Super Bowl winning season; and Flacco has proven that when given targets he is elite.

Let’s go back to Flacco’s first five years in the league. A five-year stretch in which he started all 80 regular season games; while leading the Ravens to a division title in his first three years and playoff appearances in all five. Still learning the NFL game, the second quarterback selected in the 2008 NFL Draft didn’t put up “Pro Bowl” numbers; but he did manage to throw no more than 12 interceptions in any season and over 3600 yards in each season with the exception of his rookie year; a season in which Baltimore’s three-headed backfield of Le’Ron McClain, Willis McGahee, and Ray Rice ran for over 2,000 yards.

Even with all the regular season success, Joe Flacco made his name in the league through his post-season success. Flacco became the first rookie quarterback in NFL history to start all 16 regular season games and lead his team to the Conference Championship game. The Ravens QB also became the first in league history to win 60 games, including a playoff game each year, in his first five seasons in the league.

Some say Flacco was a play away from leading Baltimore to back-to-back Super Bowl appearances…see Lee Evans and Billy Cundiff.

Then there was the 2012 post-season. Throwing for an unprecedented 11 touchdowns and zero interceptions, Flacco led the Ravens to their second Super Bowl in franchise history; beating the likes of the 2012 first overall pick Andrew Luck, Peyton Manning, and Tom Brady all on the road.

In Super Bowl XLVII, Flacco threw 22 for 33 with 3 touchdowns to win the second Vince Lombardi Trophy for Baltimore, and earn the honor of Super Bowl MVP. During the championship run, Flacco became the first quarterback in league history to register a passer rating over 100 in all four games of a single post-season.

Heading into the final year of his rookie contract, Flacco made national headlines stating that he felt he was the best quarterback in the league; that he was elite.

In July, the Ravens offered Flacco a contract extension in which he would earn $16 million a year. The 4-year quarterback turned down the offer telling his agent he believed he could improve and earn more. He decided to gamble on himself.

Eight months later and a month after his Super Bowl MVP performance, Flacco became the highest-paid quarterback in NFL history; signing a six-year, $120.6 million deal. Later that off-season Aaron Rodgers and Matt Ryan signed deals that surpassed Flacco’s, but the Ravens QB had set the market.

Call it a Super Bowl hangover, call it folding under the pressure of his new contract; 2013 was by far the Ravens’ worst season since the Flacco/John Harbaugh combination arrived in Baltimore. The defending World Champions missed the playoffs with an 8-8 record; with Flacco throwing a career-high 22 interceptions in his only season with a negative TD-INT ratio. The 2013 season was also compiled of the Ravens’ worst roster to date after losing Anquan Boldin, Ray Lewis, Ed Reed, and Matt Birk in the off-season.

With the addition of future Hall of Fame receiver Steve Smith Sr., Baltimore returned to the playoffs in 2014 behind a career-high 27 TDs from Flacco. He also finished the 2014 season just 14 yards away from his first 4,000 yard season. The Ravens eventually fell to the Patriots in the divisional round after holding two separate 14-point leads in the game.

It’s no secret that since the 2014 season, the starting quarterback in Baltimore hasn’t exactly lived up to his contract. However, this is the part where I start to explain how it’s not exactly his fault.

Heading into week 10 of the 2015 season, the Ravens’ season was all but lost with a 2-7 record. Though all seven losses were one score games. It was in that week 10 matchup against the St. Louis Rams when Flacco suffered the first injury of his career. Flacco finished what proved to be a game-winning drive on a torn ACL.

Still rehabbing from the ACL injury, Flacco signed a three-year extension to stay in Baltimore through 2021.

Playing all 16 games of the 2016 season following the injury, Flacco led the Ravens to a 3-0 start. He registered his first 4,000 yard season of his career despite the team finishing with another 8-8 record. The narrative surrounding 2016 was the defense and their inability to hold 4th quarter leads. For the first time in Baltimore it was the offense that did their job as the defense faltered.

2017 is still fresh in a lot of minds; and while not having bright statistics and missing all of training camp with a back injury that hindered him through the first half of the season; Flacco led the Ravens within one defensive stop of returning to the playoffs.

Baltimore has missed the playoffs the past three seasons. Under a microscope you might blame the injuries, lack of weapons, or inconsistency of the defense. In reality, the blame falls on the head coach and starting quarterback no matter the circumstances.

When GM Ozzie Newsome traded back into the first round of the NFL Draft in April to select quarterback Lamar Jackson, most assumed that was the beginning of the end of Flacco’s tenure in purple and black. If Flacco has a rough start to the 2018 season or fails to lead this team back to post-season for a fourth consecutive season, it may very well be the end. With that said, any team with a 33-year old quarterback with a torn ACL and back injury on his resume would be foolish to not start looking at the future.

The Ravens spent this off-season bringing in multiple targets for Flacco and solidifying the offensive line; both areas of the offense that directly affect his output. A change at defensive coordinator has also given an extremely talented defense new life; heading into a pivotal season for the franchise.

Jackson wasn’t brought to Baltimore to be another Tyrod Taylor and sit on the bench for the duration of his rookie contract; his time will come. It’s just that as long as Joe Flacco wins football games this season, his time won’t be arriving as soon as many suspect.

Since earning his record-breaking contract and saying into a microphone that he was an elite quarterback, Joe Flacco has been the most debated QB in the NFL. At the end of the day you can’t argue facts and these are the facts.

Realistic or not, anyone who does anything that involves competition should feel they are the best at what they do; if not then what are you here for?

When surrounded by weapons and a formidable defense and when healthy; Flacco is a guy who can get you into the playoffs and once there he wins games. It only takes four post-season wins to become a World Champion and he’s done it before. He’s no Brady, he’s no Peyton; but I’ll take a guy who simply wins games when given the proper weapons any day of the week.