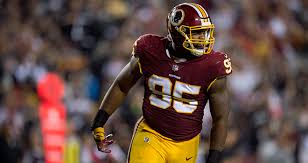 Richmond-Another spirited practice for the Redskins today as the team wore shoulder pads on a wet, water holding field. Practices continue to be full of energy and competition as the team is working towards their first preseason game. Also cornerback DeAngelo Hall made an appearance to officially announce his retirement. Here are some notable moments from the morning practice. 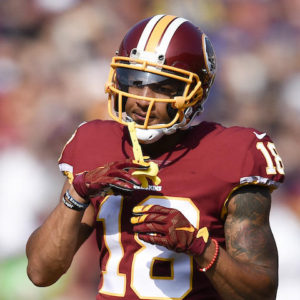 -In the ebbs and flows of practice today this was an offensive day. Standouts today were wide receiver Paul Richardson, quarterback Alex Smith on offense and outside linebacker Preston Smith and safety Kenny Ladler. Overall the offense was a step ahead of the defense and had open receivers numerous times.

-Wide receiver Paul Richardson especially had an impressive day. In the one on one drills, Richardson routinely got past his defender. On one play Richardson got hurt and was slow to get up. After being stretched out Richardson returned and put a quick move on cornerback Quinton Dunbar and as Dunbar stumbled Richardson had an easy touchdown. Then in full 11 on 11 drills Richardson made numerous catches on a variety of routes. Richardson has a quick get off the line, great feet to be able to route different routes, and a toughness as well. Richardson will surprise people.

-Quarterbacks Alex Smith and Colt McCoy both had stellar days today. Smith spread the ball all over the field and McCoy made numerous tough throws. Both also moved well in the pocket and used their feet to advance the offense. Kevin Hogan on the other hand had a tough day with some bad throws and an interception thrown. It looks more and more likely that the Redskins will just carry two QB’s on the roster and Hogan will go to the practice squad.

Colt McCoy with a laser to Brian Quick for a touchdown. Stroman had great coverage but a better throw and catch #redskins #httr

-Outside Linebacker Preston Smith had a good day. Smith had a few pressures that would have been sacks in live action. Also there was also a play when he ended up matched up with running back Chris Thompson. During the play Alex Smith was flushed out of the pocket to his left and Preston Smith followed Thompson up the sideline. Preston Smith broke up the pass but it was probably pass interference. Even with the penalty it was a great defensive play to stay with Thompson.

Great 11 on 11 action. Smith pressured by a safety blitz rolls left finds Thompson one on one with Preston smith who covered well but interfered. #redskins #httr

-In the last session of practice the first team offense was conducting a two minute drill. On a third down play with :13  seconds remaining, Doctson was matched up in the slot with Josh Norman. Doctson ran a quick out route and Norman defended the play well. Doctson and Norman got tangled and Norman landed on top of Doctson and his shoulder. Doctson immediately reacted in pain and practice was concluded.  Doctson walked off not moving his left arm.

On the last play of the two minute drill Doctson gets injured on a play being covered by Norman. Looks like Doctson landed funny on his left shoulder. Helped inside by trainers #redskins #httr

-The only injury of practice was Josh Doctson.  The team announced that it was a shoulder injury and an update will be given tomorrow.

-On Chris Thompson’s Availability: “One hundred percent, yes I am, actually. The way he runs, he looks faster right now just watching him on tape. His burst looks like its 100 percent back.”

-On Derrius Guice: “Quite frankly we didn’t have any questions on his character. You know, in every interview that we had with him and talked with him, we never had a concern about him at all.

-On Maurice Harris: “The thing about Mo is he can play any position, and he is very quarterback friendly, he’s got strong hands and he’s probably, he could be our best route runner on our team.

-On if WR Jamison Crowder returning punts: “Yeah, why not?”

-On rookie contract: “You know, it crosses my mind at times. We haven’t (agent) talked to the Redskins personnel, I haven’t personally, but you know going into the season this year all I know is I got to play ball and I got to, you know, control what I can control and that’s my performance on the field.”

-On containing Alex Smith: “It’s pretty tough. You know, Alex Smith is a great quarterback. He’s mobile he can throw in the pocket and hurt you with his feet. But it’s great we get this in practice because we’ll see a lot of quarterbacks down the road and going against him in practice, it will prepare us for the future.”

-On the interior defensive line: “It’s always good to have a good interior line. We got guys who can stop the run, also, and in the passing game they can push the pocket in (and) keep the quarterback from having a comfortable pocket in front of his face or stepping up to throw passes comfortably.”