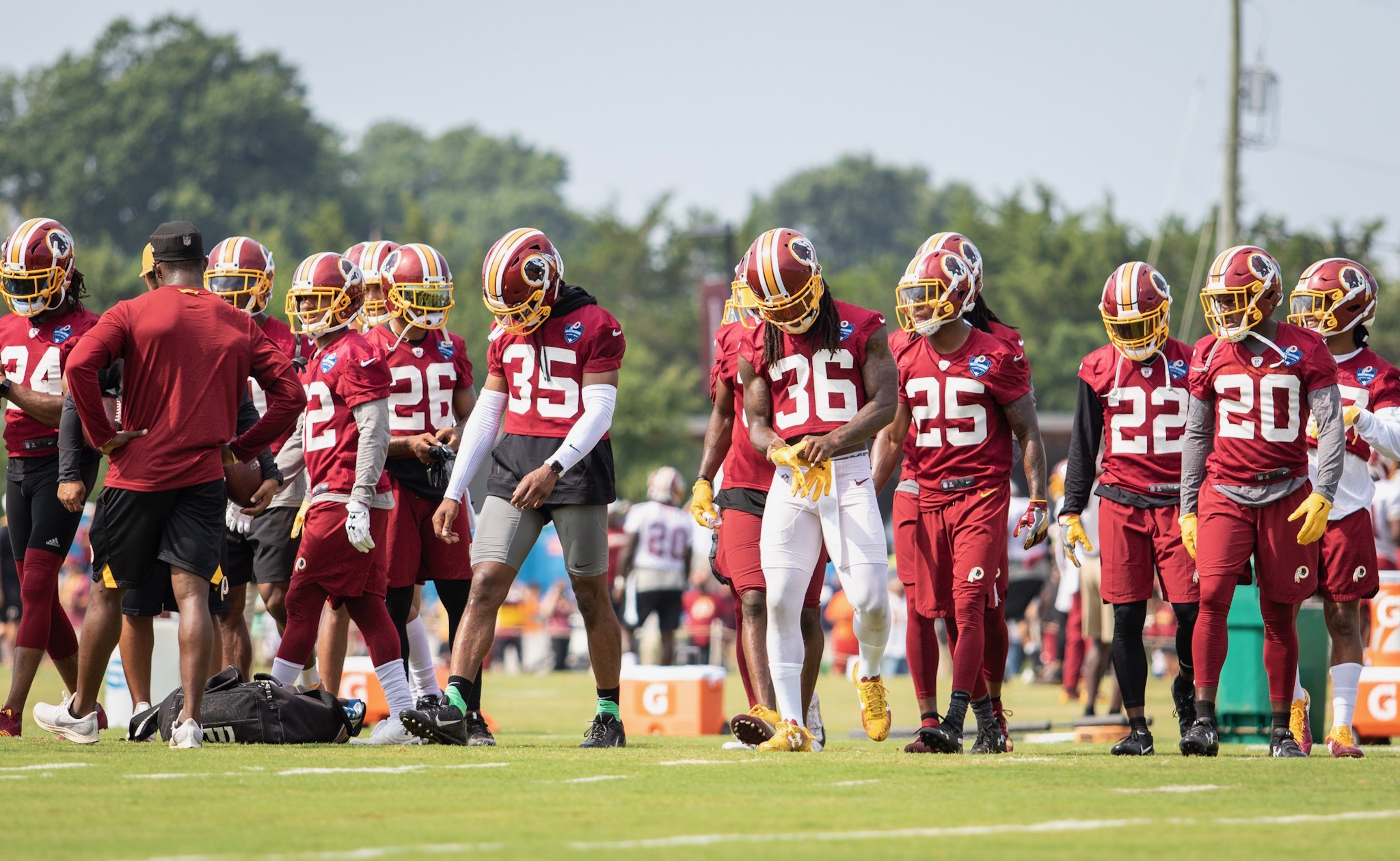 Today the Washington Redskins held a lighter practice than yesterday, which gave the guys lower on the depth chart a chance to prove themselves and get more on the field reps. Coach Gruden decided to take it easy and gave some of the veterans a day off. The team has an off day tomorrow followed by fan appreciation day on Saturday. Here are the notable moments from today’s work.

-Coach Gruden stated that wide receiver Josh Doctson was ok.  Doctson landed on his shoulder yesterday at the end of practice when Josh Norman was defending him in 11 on 11 action. Gruden said he was just giving him some rest.

-The following players were given veteran days off for rest: Trent Williams, Ryan Kerrigan, Chris Thompson, and Josh Doctson. Other starters did reduced reps and some of the more physical drills were left out today.

-Notable lineup concerns. On offense Ty Nsekhe and Morgan Moses started at the tackles. Bryon Marshall took the first two snaps at running back and Brian Quick started for Doctson. On defense Phil Taylor started at nose tackle and Matt Ioannidis started at defensive tackle opposite of Jonathan Allen. Pete Robertson started in the place of Ryan Kerrigan.

-One notable matchup between the top defense and offense. Alex Smith threw a fade to Brian Quick. Josh Norman defending on the play got great position and Quick tried to come over the top of Norman. The ball was hit in the air and Zach Brown was able to intercept it. Smith is more willing to throw jump balls to our bigger receiving corps. Two plays later Smith Throws another jump ball that Maurice Harris made a tough catch over Greg Stroman.

Smith throws a beautiful pass to Harris that he jumps over stroman. #redskins

-Quarterback Colt McCoy continues to have a strong camp. McCoy has shown good arm strength and has been very accurate. On one sequence in seven on seven drills, Brian Quick ran a crossing route and McCoy threw an exceptional pass over the cornerback and underneath the safety that Quick dropped. Back on 11 on 11 drills, McCoy led the second team down the field in hurry up which McCoy capped off with a naked bootleg touchdown. McCoy is definitely comfortable in the offense and is showing why he received that extension.

-Most exciting play of practice is when Kevin Hogan was leading the third team offense down the field and safety Troy Apke helped blow the play up and recovered a fumble for a touchdown. The defense and the fans cheered when it happened.

Apke forced a fumble and returns it for a touchdown. The fans and defense celebrate #redskins

On today’s practice- ” Probably. Today’s going to be a light day for these guys. We are (going to) try to taper off some of the running, they have a day off tomorrow, and then we’re going to get after it Saturday.”

On reserve offensive lineman can contribute: ” Well that’s what we’re trying to figure out, you know. (Tyler) Catalina, (Kyle) Kalis, (Demetrius) Rhaney, obviously (Tony) Bergstrom, we’re moving those guys around quite a bit.

On the backup middle linebackers: “They’re doing good. Obviously, Shaun Dion (Hamilton) is doing a lot of good things. So, I’ve been impressed with him also…. (Zach) Vigil came in last year and had a great game against Denver (Broncos), did some good things against the (New York) Giants. Josh Harvey (-Clemons) is more of a dime type player, but he can get some work in base.”