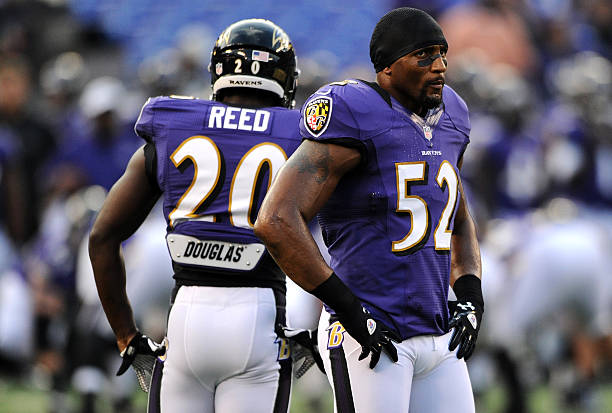 On Saturday August 4, 2018, Ray Lewis will become the second Baltimore Raven to be inducted into the Pro Football Hall of Fame. Ahead of Saturday’s ceremony, take a look at the top five Ravens in franchise history.

Still the franchise rushing leader, Jamal Lewis was the first running back to establish that Baltimore was a run-first offense and there was nothing you could do to stop it. Lewis had 1,000 yard rushing totals in his first four seasons; including a 2,066 yard performance in 2003. That 2003 season still ranks 4th all-time in NFL history and earned Lewis his only Pro Bowl and All-Pro selections. The 2003 Offensive Player of the Year still holds the record for most rushing touchdowns, attempts, and yards per game in team history.

T-Sizzle, Hacksaw, Ball So Hard University; no matter what name you use when addressing Terrell Suggs, you are speaking on a Hall of Fame player. Suggs may very well move up as high as number two when he decides to hang it up; some may argue he’s already there. His 125.5 career sacks and 32 forced fumbles already rank first in team history. Following Ray Lewis’ and Ed Reed’s departure following the Super Bowl XLVII victory, Suggs became the leader of the defense and team and is molding fellow linebacker C.J. Mosley to take over the reigns when the time comes. A 7-time Pro Bowler, 2003 Rookie of the Year, and 2011 Defensive Player of the Year and entering his 16th season; Sizz has shown no sign of slowing down as he prepares to lead the Ravens on another deep post-season run.

The first draft pick and the first player elected to the Pro Football Hall of Fame; Ogden was the anchor of an offensive line that heavily relied on their rushing attack. Ogden was voted to the Pro Bowl 11 times during his 12 year career, his rookie season was the only exception. While the position of offensive lineman doesn’t provide the statistics or glamour like everyone else on this list; Ogden’s impact was undeniable which is why he already owns a gold jacket.

If there’s anyone on this list that could arguably challenge for the number one slot on this list, it’s Ed Reed. The 2004 Defensive Player of the Year holds the NFL record for longest interception return (108 yards) and most career interception return yards (1,590 yards). He is the only person in NFL history to return an interception, fumble, punt, and blocked punt for a touchdown. Reed also owns every statistical interception record in Ravens history. Despite leaving Baltimore at the end of his career in what you could compare to Michael Jordan’s stint with the Wizards; Ed Reed will undoubtedly become the third Raven to earn a bronze bust when he becomes eligible in 2019.

Sorry to not really drop a bombshell here but no other name could go in this slot. The second draft pick in franchise history and the only player in team history to play in both Super Bowl wins; Lewis was the ultimate team captain and leader for not only the defense, but the whole team. His 1572 career tackles still ranks first in franchise history; the next closest is Suggs with 576. His 13 Pro Bowls, 2 Defensive Player of the Year Awards, and 7 All-Pro Selections all rank first in team history as well. His list of accolades could be an article in itself; that’s why he will be headlining Saturday’s ceremony in Canton.