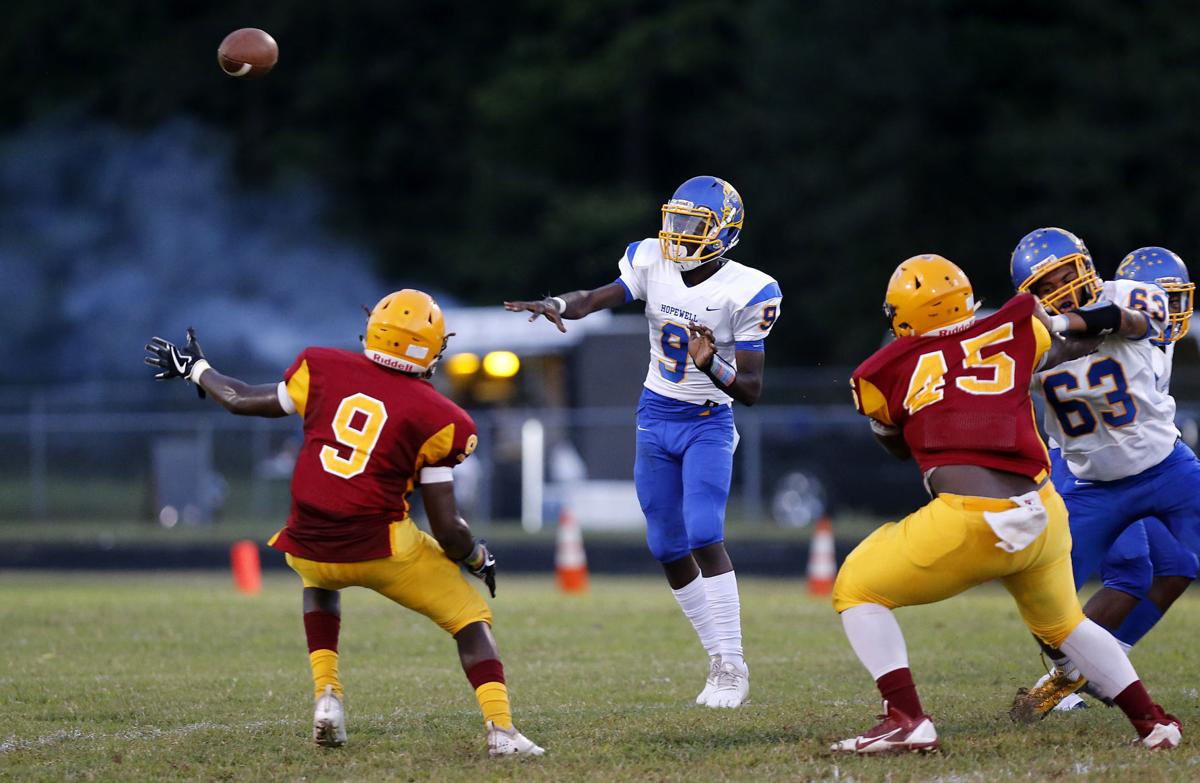 “A rainy night in Georgia ( Hopewell). Such a rainy night in Georgia, ( Hopewell)
Lord, I believe it’s raining all over the world. “ With apologies to songwriter Brook Benton, we’re
in the midst of what could be the 5th wettest year in the history of Virginia, and Hopewell and
Friday night rain just seems to be going together this year.
Having had 4 previous Friday night games postponed because of two hurricanes and other
rain predicaments, Hopewell decided to play in this one. Despite a day-long drenching rain
that stopped by game time, they prevailed ( mostly), winning over arch-rival Petersburg 54-12.
Although the field became a mess of mud, and balls kicked in the pregame practice would land
and not move on the turf – spewing water into the air – Hopewell dodged most of the messiness,
except for a reinjured ankle to sophomore standout Robert Briggs near the end of the first half.
Briggs had missed three games earlier this year but had returned in strong fashion to finish the
regular season with 722 rushing yards and 12 touchdowns. That total spanned only 6 games
considering the Powhatan game was canceled because of weather. Before he reinjured the
ankle, Briggs had rushed 11 times for 67 yards and a touchdown. However, he was on crutches
after the game, and it remains to be seen about next week.
Hopewell is blessed with depth though, at several positions, and that proved to be a huge
advantage by night’s end. Junior fullback Kaveion Cox, who in the regular season had scored 8
touchdowns with limited carries because of full-time defensive end duties, stepped up big time
rushing for 163 yards ( 41 and 45-yard touchdown runs) on just 7 carries. The play before his
second touchdown, Cox had sacked the quarterback and recovered his fumble.
As deserving as he was for the Strosnider Chevrolet Player of the Game award, Cox needed
to share it with sophomore Trey Henderson for his all-around play. Henderson made several
open-field tackles on kickoffs that kept Petersburg from springing what could have been two
touchdown returns. He also is now a part of a shared quarterback system and serves as Head
Coach Ricky Irby’s running quarterback. He scored twice inside the 5-yard line and had several
other clutches runs on his way towards 4o rushing yards on 8 carries. Defensively he led the team
with 8 unassisted tackles, and 9 overall.
But Hopewell had other stars that we’re used to talking about – seniors Sean Allen and Daniel
Grier. Allen caught three of Grier’s passes for 73 yards and two highlight-reel touchdowns of 11
and 40 yards. Grier threw extremely accurate passes to Allen, whose third catch was also
spectacular, going high and away from the defender, and while heading to the ground, showing
unusual fingertip balance to secure the ball without letting it hit the ground. Grier finished the
night 5-11 through the air for 99 yards and the two touchdown passes.
Hopewell played very well against a talented Petersburg squad that in three years under Head
Coach Mike Scott has improved from 3-7, 4-6, to this year’s 7-4. Scott’s son Mezziah
impressed again at quarterback, as he did also when Hopewell won in the regular season 35-
14. Sophomore Scott had more on his shoulders that night as their best player, Upton Bailey,
was out with an injury. Bailey was back for this game, but was limited by the tenacious Hopewell
defense to 43 yards on 16 carries. However, when Scott connected near the end of the first
half with his favorite receiver Zyshawn Muhammad on a perfectly thrown 34 yard pass that was
caught despite excellent defense, it led to a Petersburg touchdown. Suddenly, they were only
two scores down, 27-12, and would receive the kickoff to start the second half.
In an important momentum shift though, Hopewell would force Petersburg to punt on that first
drive. Then later on Petersburg’s second possession, Hopewell defender Reggie Ruffin made
the defensive play of the game rising to the top of his 6’3” frame to tip quarterback Scott’s pass

and then had the wherewithal to turn and catch his tipped pass for the interception. With the 11
yard touchdown pass from Grier to Allen on the very next play, Hopewell now led 34 – 12, and it
was just a matter of time for Hopewell to “rain on” Petersburg’s upset thoughts. Defensive back
Zion Hubbard not only limited Petersburg receiver Muhammad to one catch, he was credited
with an interception, and also picked off a first half two point conversion attempt.
For the second week in a row, Hopewell stretched out a 35 point second half lead producing a
running clock the rest of the way. As Coach Irby sprinkled in reserves, backup quarterbacks
Playford Hart and Joseph Eliades saw action. Hart completed a well thrown 20 yard pass to
Kat’wan Taylor while Eliades scored from the shotgun on a two yard run in the last minute of the
game. The Blue Devils finished with 484 yards of total offense to Petersburg’s 184 yards.
As Hopewell has been reigning this year as State Champions of Divison 3 football, they now
advance to the second round of this year’s playoffs and the chance to defend their
championship. They will plan to do so in this Friday’s scheduled matchup hosting Portsmouth’s
Norcom High School ( 7-4) . In the season’s first game, the Blue Devils shut out Norcom on the
road 13-0. However, broadcast partner Coach Marshall Parker expressed concern with this
second matchup. “While it is hard to beat a team twice in one year, Norcom after losing its first
three games, has come on strong at the close of the regular season to win 7 out of their last 8
games.”
Hopewell knows all about momentum as they endured a tough three game losing stretch last
year to Dale, Dinwiddie, and Meadowbrook to end the regular season. However, they
regrouped to storm through the playoffs winning all 5 games and taking home the title. 21
Seniors would like nothing more in closing out their careers than to repeat as State Champions.
What’s the best way to keep team momentum advancing? More of the same. Hopewell
coaches already do such a good job of motivating players according to their unique
personalities. Combine that with player’s continued ability to motivate themselves, and you
have this growing team chemistry.
“As iron sharpens iron, so one person sharpens another.” (Proverbs 27:17) This is one of my
favorite Bible verses, and it speaks to the role that each of us can play in helping to bring out
the best in others, and ourselves.
We see visible proof of this every Friday night during football season, or because of rain,
whenever the game is played. I hear rain is in the forecast again for Friday…
Jeff Butler is the Pastor of Woodlawn Presbyterian Church in Hopewell and is the Play by Play
Voice for the Hopewell Blue Devils over WHAP Radio 1340AM and 96.9 FM. The game can
also be heard online at www.foxsports1340am.com or by phone at 605-313-0571.
This Tuesday night, we continue with the Coach Ricky Irby show from Simply Unique, 230
S.15th St. in Hopewell at 6:30 PM.. It will be on WHAP Radio if you can’t make it.