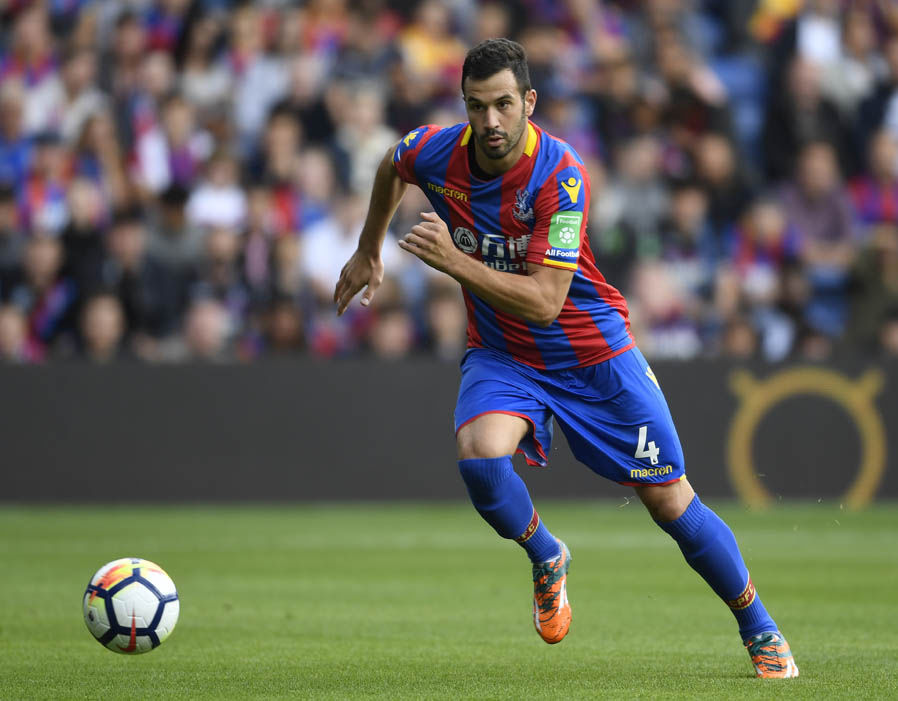 Tweet
Prior to Crystal Palace’s 2-2 draw against Arsenal at Selhurst Park in the Premier League this past Sunday, the south London club held a press conference with club captain and Serbia international, Luka Milivojević, to discuss Palace’s current Premier League form and forthcoming games in the current campaign.
Crystal Palace went into the home encounter against Unai Emery’s Arsenal off the back of a 2-0 loss to Everton at Goodison Park. However, this past Sunday witnessed a brave fightback for the Eagles against an Arsenal side who had entered the game at Selhurst Park 11 games unbeaten prior to the game.
It was indeed talismanic captain Milivojević who expertly converted a penalty for the Eagles to take a 1-0 lead just before the stroke of half-time thereafter Arsenal’s Shkodran Mustafi committed a foul inside the area. The 27-year-old Serbian adeptly sent Arsenal goalkeeper Bernd Leno the wrong way with a cool roll past the German.
In the second half, with Palace holding a 1-0 advantage, the Gunners then emphatically equalized in the 51st minute after a sublime free-kick from Granit Xhaka from just outside the right-hand corner of the penalty area. The industrious Swiss international struck a fine effort with Palace goalkeeper, Wayne Hennessey, merely having a finger tip on the ball.
Five minutes thereafter, the Gunners then took full advantage with a 2-1 lead courtesy of Pierre-Emerick Aubameyang. Controversially, the build up to the Gunners second goal against the Eagles appeared to have come off Alexandre Lacazette’s arm before the in-form Gabon international exquisitely fired home his seventh Premier League goal this season for the Gunners.
In the 83rd minute, however, the Eagles levelled the tie at 2-2 to share the spoils via another well-struck penalty from inspirational captain Luka Milivojević to salvage a vital point for Roy Hodgson’s side. The Serbian’s brace signified his first two goals of the current campaign and won the Man of the Match vote from Palace’s fans thereafter an impressive performance.
The Eagles, who are currently 14th in the Premier League under Roy Hodgson, have now won just one of their last six league games after this past Sunday’s 2-2 draw against Unai Emery’s Arsenal.
Meanwhile, Crystal Palace next face Maurizio Sarri’s impressive Chelsea this Sunday at Stamford Bridge. Elsewhere, throughout the month of November, Palace also host Mauricio Pochettino’s Tottenham Hotspur and then face the test against José Mourinho’s Manchester United at Old Trafford in a vital encounter.
Palace, who finished 11th in the Premier League last season, have won two of their opening ten Premier League fixtures having also respectively drawn two and lost six.
What was the mood like in the dressing room after the defeat on Sunday (away game to Everton)?
Luka Milivojević: The mood was not good, but it’s something that happens after any defeat. We knew that we would have some chances to try to win that game, and we had that especially in the first half. Of course it’s very painful and it’s hard to take. If I compare this defeat to other defeats, they’re very similar. We were not much worse than the opponent and we’ve lost the game.

Is it harder to take when you know you might have been able to win, or do you actually go “No, we’ll take confidence moving forward”?

Luka Milivojević: It’s very hard to take, because at this moment we know we have dropped many points which we didn’t deserve to drop. But that’s football and the Premier League – you will be punished for every mistake. The other team are going to make chances, because all of the other teams have quality and quality players. We all know that. We played well in many games, but people judge the result. I think we have to believe, and we have to continue to try to improve what needs to be improved.

So you’re basically still confident going forward and the mood around the squad is good?

Luka Milivojević: I know that we have a lot of good characters in the squad, but when you see you are playing the next three games against the top teams, that’s not easy to take. But we will try to go game by game and get some points. In the past, we’ve beaten many of the top teams and we believe that we have quality players in the squad and we can do it again.

With the penalty in the last match, do you think it was quite unlucky that it hit goalkeeper’s feet?

Luka Milivojević: I look differently at it. I think I should have shot better, I’m not happy with the last step I took before hitting the ball, it was something that I didn’t do as I wanted. But I’m sure when the next one comes, I will score. It is about showing quality and being calm in front of the team and taking that responsibility.

Luka Milivojević: No, I think it doesn’t go that way in professional football. We win together, we lose together. Sometimes it is my fault, sometimes it is because of another player. Of course, they come and give me support if I make mistake as I do to the other players. As I said, we have a lot of good characters, good mentality in the group and that’s something that keeps us in the Premier League.

Next game is Arsenal and they’re obviously on the good run. Maybe this is not the best fixture for you guys, or it is maybe an opportunity?

Luka Milivojević: It is also not easy for them to come to Selhurst Park. Beating Crystal Palace at Selhurst Park is not easy for anyone. Some of them had a lot of luck to come away from our stadium with three points. It will not be easy for them and it will not be easy for us. We expect a very tough game, they have a very good squad, a very, very good manager in my opinion, they play a nice football. But as I said at Selhurst, in front of our fans with that atmosphere it won’t be easy.

You, obviously, have been very good at home. A lot of shots on target, maybe lacking quality in finishing as you said. How do you try and cause them problems?

Luka Milivojević: We will look for their weaknesses if they have any, maybe the backline, midfielders, I don’t know yet. We will see where we can take advantage and try to punish them and try to score some goals.
After them (Arsenal), Chelsea, Manchester United and Tottenham. It doesn’t really get any easier.
Luka Milivojević: For sure, it won’t be easy, but I remember when I moved here from Olympiacos two seasons ago, we had almost a similar schedule. We then beat Liverpool away, Arsenal 3-0 at home, Chelsea away. That gives us quality in the group, we believe in ourselves and we have to stay united and try to go game by game. We can’t go further than the Arsenal game. We have to focus on Arsenal and take from that what we can and then we go for the next one.

Is that what the message for the fans is? You’re just going game by game?

Luka Milivojević: We are going to go game by game and we need as much support as they can give us. We will try to make them happy, because it means a lot to us when we win the game at our stadium. We know how hard it is for our opponents to come and take points in our stadium, so we are going to try and claim that back.
Tweet
Dean Perretta