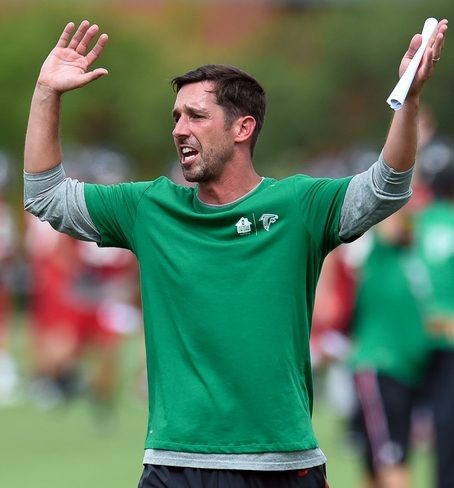 After New England’s Offensive coordinator Josh McDaniels dropped out of the head coaching position for the 49ers, the 49ers decided to offer Kyle Shanahan the job.

According to league sources, if the Falcons are in the Super Bowl, they will have a second meeting to talk with him about selecting candidates for the General Manager position. League rules prohibits teams announcing head coaches until their team are out of the playoffs.

Shanahan is the perfect man for the job. He brings a sense of dedication, morals, and does not take any junk from players. If you are not a hard worker and dedicate your time with improving than you will not get on the field.

Shanahan’s offensive mindset is a masterpiece. Look at what the Falcons have done this season as a unit. Offensively they have destroyed opponents, putting an average of 33 points up on opposing teams. Matt Ryan is reading what the defense gives him and torched opponents’ secondary when they bring a blitz scheme.

The job that Shanahan has done with the Falcons in a short period of time is a beautiful sculpture of a dynamic offense.

The 49ers face some adversity and obstacles with rebuilding their organization. The organization, players, and recent coaches are having a difficult time with getting on the same page. The 49ers needs to find a good running back that is healthy, run between the tackles, and helps on pass protection. All of the bruises and scraps this season does not fall on the QB situation. The 49ers did not have any offensive strategy.

Chip Kelly had the wrong personal with this group. The 49ers lacks speed with their outside wide receivers. The receivers had trouble getting separation from their defenders.

Shanahan has to go out in the draft and draft some quality receivers that can get this offense rolling. They need some offensive players that can hold their own against D-Lineman. The 49ers struggled in that category and that was one of the reasons why Colin Kaepernick has not been successful throwing the ball. He is always hassled, hit, and hurried, which does not give him time in the pocket.

With a new face, morals, and system, maybe Shanahan can get this team rolling in the right direction. Only time will tell.