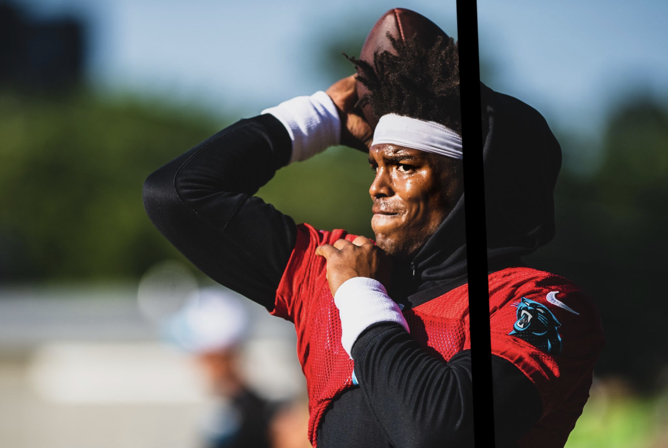 The Carolina Panthers opened up minicamp on Tuesday morning and all eyes were on Cam Newton…literally.

A couple of weeks ago, video footage of Newton throwing overhand passes during a closed practice session were leaked to Twitter. The Twitter peeper tried to backpedal by saying the footage was from 2016. Last week during OTAs, head coach Ron Rivera revealed that the footage was indeed from 2019 and that the quarterback has made great strides in his road to recovery from arthroscopic shoulder surgery in late January.

It was announced that QB1 would throw “publicly” for the first time this offseason…well, sort of. The Panthers announced that Newton would be debuting new throwing mechanics via livestream on the team’s social media during the opening day of minicamp which was also open to the media.

Newton was limited to stationary targets and drills, but the focus was more on the new, improved mechanics teased by NFL Network Insider Ian Rapaport.

From Up to the Minute Live: The #Panthers are giddy about QB Cam Newton’s overhauled mechanics that should feature a more compact and more efficient throwing motion. It was a full commitment to it. pic.twitter.com/p8rSgsopzi

After performing a couple of “air throws” to loosen up, Newton joined the other quarterbacks in individual drills. After a few 10-yard passes and team stretching, Newton worked on footwork and completed a number of passes to stationary targets; the furthest roughly 25 yards. As for the change in mechanics, Rivera says there really isn’t anything “new”.

According to Rivera, the tweaks in Newton’s throwing mechanics were put in place in 2018 by offensive coordinator Norv Turner and quarterbacks coach Scott Turner. Those adjustments, implemented to take stress off Newton’s shoulder, worked when the former MVP was healthy as evidenced by Newton’s strong start to the 2018 season.

“If you go back and look at a lot of things that happened earlier in the year before he started having shoulder issues, you can see the improvement. You can see the footwork. You can see the whole development of him. I think the shoulder started to go, then you saw everything kind of just fall to the wayside. Now, it’s a good opportunity to go back, rework those things, do the things he needs to do to improve, and he’s done a great job. We’re real excited about it and as I said, this is just the first step of many. We really look forward to tomorrow to see how much more he can do.”

Specifically, Rivera would like for Newton to stick to his run attack and the “nice, tight spiral” he throws when everything is the way it’s supposed to be. Last season was the perfect indicator that as Cam Newton goes, so goes the Panthers. While Newton isn’t exactly throwing bombs just yet, his progress is trending in a positive direction weeks before training camp and months before the season begins.