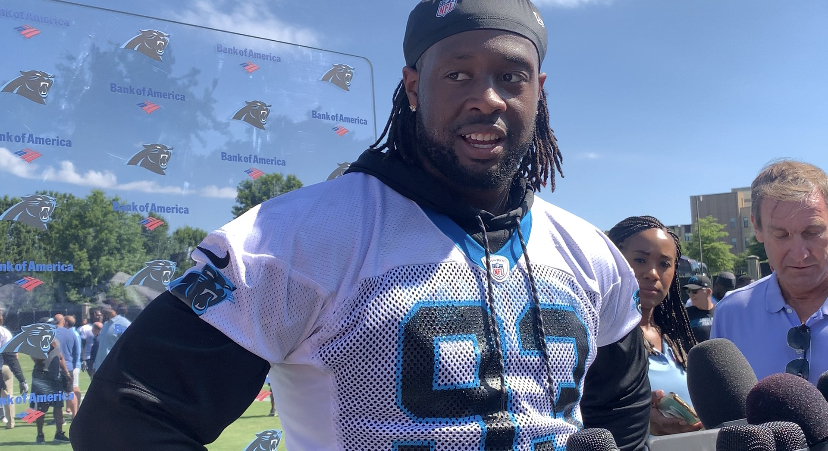 For the first time in his NFL career, defensive tackle Gerald McCoy began minicamp in a new team uniform. One thing is for sure, and two things are for certain – McCoy is excited to be a Carolina Panther and he most definitely does not miss the Tampa Bay heat.

The highly sought after six-time Pro Bowler jogged out to the practice fields at Bank of America ready to continue his year of “transition”. In his introductory press conference, McCoy disclosed that he is naming this chapter of his life, “Transition” as he begins a vegan lifestyle and becomes acclimated to his new team. The former Tampa Bay Buccaneer was all smiles at the conclusion of his first day of minicamp as he marveled at the speed of the defense. “These guys really can go man. You can’t really see it until you get it on tape,” he said while speaking to media after practice.

Gerald McCoy on his first NFL practice not in a Bucs uniform. pic.twitter.com/S6Bs9F0e3Y

Decked out in his signature #93 jersey, which he was able to successfully negotiate due to “great teammates”, McCoy explains that he was a little “rusty” after having not played football since January.

“It was great. You know I haven’t personally played football since January so I was a little rusty. Then learning a new scheme and trying to get my technique right, and just doing what I’ve been doing for the past nine years; trying to put it all together.”

McCoy is quickly becoming known for his quotes, much like the loquacious Newton. When talking about the difference in weather between Carolina and Tampa, McCoy said “It don’t feel like it’s 110 degrees and humid. In Tampa you could see your soul walking off the field while you’re still practicing.” To be fair, Tuesday’s practice weather was more than favorable with the temperature hovering around 73 degrees, but McCoy shouldn’t get too used to that. Especially with a sweltering Spartanburg waiting to welcome him to his first training camp as a Panther in just a couple of weeks.