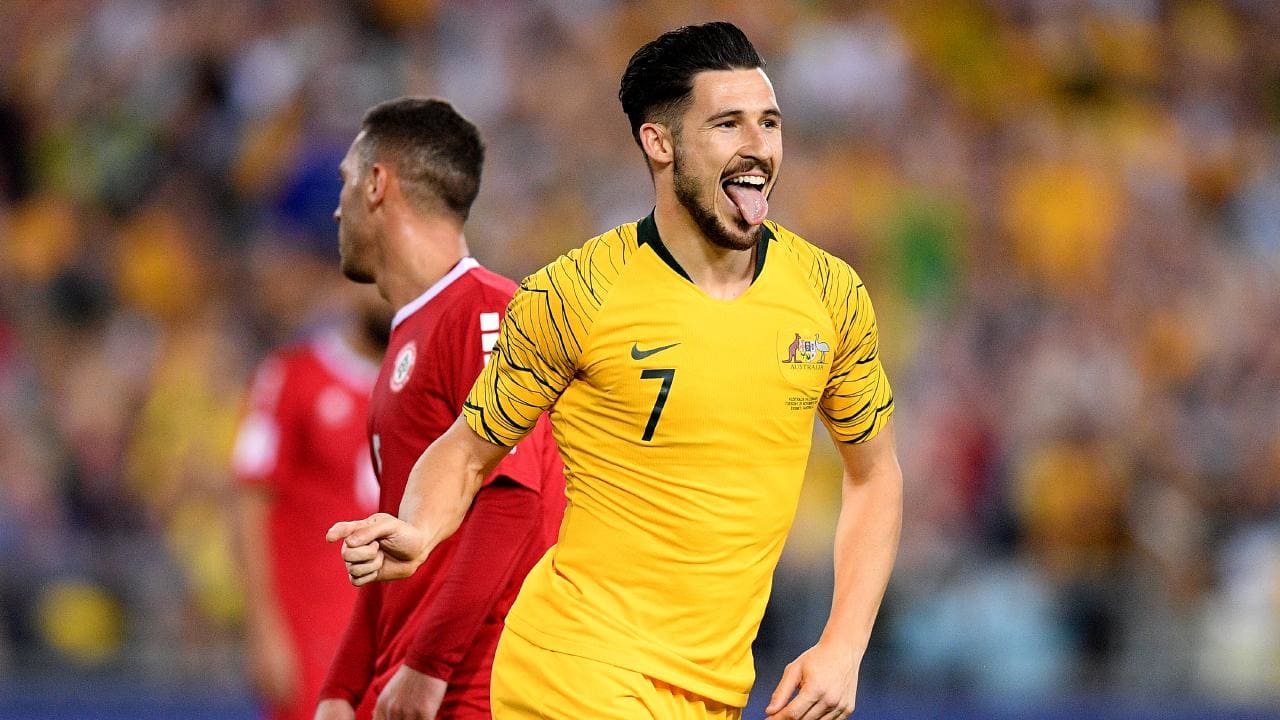 Prior to Australia’s 2019 AFC Asian Cup Quarter-final showdown against tournament hosts United Arab Emirates, Hertha Berlin forward, Mathew Leckie, candidly spoke with media members during a press conference to discuss the Socceroos overall form at the 2019 AFC Asian Cup, as well as Australia’s overall ambitions and expectations at the tournament.
Australia, who opened their 2019 AFC Asian Cup campaign inside the Hazza bin Zayed Stadium in Al Ain in a 1-0 losing effort against Jordan, courtesy of a 26th minute goal from Anas Bani Yaseen, witnessed an early surprise as the 2015 AFC Asian Cup champions surprisingly fell short to Jordan, currently ranked 109th place in the FIFA/Coca-Cola World Rankings.
Australia’s second group game at the 2019 AFC Asian Cup witnessed the Socceroos face Noureddine Ould Ali’s Palestine at the Rashid Stadium in Dubai. Palestine, currently ranked 99th in the FIFA/Coca-Cola world rankings, drew 0-0 in their opening 2019 AFC Asian Cup group encounter with Syria before facing the Socceroos in their second group game of the tournament.
However, Graham Arnold’s Australia rectified their surprise opening 1-0 group game loss to Jordan with a reassuring 3-0 victory to secure the all important three points. Two goals in the opening 20 minutes from Jamie Maclaren and Awer Mabil provided the Aussie’s with the distinct advantage before AEK Lanarca striker, Apostolos Giannou, netted the decisive third goal to secure Australia with the victory after losing their group opener against Jordan.
Australia then faced Fajr Ibrahim’s Syria in their third and final group game inside the Khalifa bin Zayed Stadium in Al Ain. Syria drew 0-0 with Palestine in their group opener, whilst losing 2-0 to eventual Group B winners Jordan in their second group game inside the Khalifa bin Zayed Stadium in Al Ain.
Awer Mabil provided the Socceroos with a comfortable 1-0 lead against Syria four minutes before the interval prior to an equalizer just on the stroke of half-time courtesy of Syria’s Omar Kharbin.
Chris Ikonomidis then scored in the 54th minute to give Australia a 2-1 lead. The Australian lead was all but assured until the Socceroos conceded a penalty 26 minutes thereafter in the 80th minute, which was then cooly converted by Syria striker, Omar Al Somah, who scored his eighth international goal for his country.
However, Australia and Celtic midfielder, Tom Rogic, broke Syrian hearts to seal all three points for the Socceroos with an inspirational late winning strike in the 93rd minute to ensure qualification for the Socceroos into the knockout stages.
Graham Arnold’s Socceroos finished second place behind Jordan in Group B at the 2019 AFC Asian Cup to advance into the final sixteen. Australia scored six goals and conceded three, whilst winning two of their group games and losing once. Group B winners Jordan scored three and conceded none throughout their three group games at the 2019 AFC Asian Cup.
Australia’s final sixteen knockout game against Uzbekistan inside the Khalifa bin Zayed Stadium ended in a tentative 0-0 stalemate after extra time. However, the Socceroos emerged triumphant 4-2 on penalties courtesy of Mark Milligan, Robbie Kruse, Apostolos Giannou and Mathew Leckie all successfully converting from the spot to secure the win.
The Socceroos victory against Uzbekistan set-up a crucial Quarter-finals encounter against 2019 AFC Asian Cup hosts United Arab Emirates before a 25,053 capacity attendance at the Hazza bin Zayed Stadium in Al Ain.
However, during the second half of the Quarter-final showdown against the tournament hosts, Australia’s hopes were unceremoniously dashed on the 68th minute when Ali Mabkhout, UAE’s third all-time leading goalscorer, delivered the proverbial kiss of death to the Socceroos, which invariably eliminated Australia and sent the hosts, United Arab Emirates, into the 2019 AFC Asian Cup Semi-finals courtesy of their decisive 1-0 win.

Q: Mathew, a big game. What’s the feeling after the camp?Mathew Leckie: Yes, very positive. Obviously we got a good vibe after the last game (against Uzbekistan in the final sixteen). It was a great game, a special finish. It’s always exciting, penalty shootouts and the fact that we ended up winning it (4-2 on penalties), brought us closer all together. We’re a few steps closer from the finals.

Q: You played more than sixty minutes, probably more than what you expected. How’s the body feeling, do you feel ready for the next game (against United Arab Emirates)? Mathew Leckie: Yeah, I feel good, you know. 60 minutes, I wasn’t expecting to play that long, but ended up working out like that. Obviously, I was a bit sore after the game (against Uzbekistan), after being out for a few weeks but with the recovery that we have done, we’ve been really focused on that. Yeah, I’m feeling fresh. We will be pushing again for the game (against United Arab Emirates).

Q: And obviously, playing against the host nation (United Arab Emirates), does that put a bit of a pressure on them to deliver and you guys (Australia) playing in front of big crowds, you seemed to thrive on that? Mathew Leckie: Yes, it’s always nice playing in front of a full crowd. Sometimes playing in front of a big crowd, sometimes when you play against a small crowd, it doesn’t feel like a competitive match. It’s going to be nice. It’s always been a tough game against the UAE. Hopefully, it’s a crowd with a lot of atmosphere. It gets the game pushing and I think it’s going to be a great game.

Q: You stepped up and took the fifth one (against Uzbekistan in the penalty shootout), talk us through that? Mathew Leckie: I wasn’t sure if I was going to make it around the (2019 AFC Asian Cup) 16th (round). It was a bit of a question mark there, but we worked really hard to get it right and just to come on (against Uzbekistan) was nice.
It ended up being a nice story working hard to get back in and I’m able to score the fifth (penalty). But, you know, it’s just one of the five (penalties). They’re all important and obviously, (Maty) Ryan, he saved two pens and it’s a special moment for him, because if I’m not wrong, it’s his first pen save (for Australia) and he pulled off two, so good for him.

Q: How do you feel from the 60-minute shift (against Uzbekistan)? Do you feel you can get out there and get going?Mathew Leckie: Yes, I feel good. We’ve used the last few days very good. We haven’t trained too hard, we just touched on a few things. We made sure that the recovery was the most important. We’ve got a really good background staff. The physios make a good team. We have definitely done good things to get ourselves right. I’m feeling fresh. I think 60 minutes, originally, the physio thought it might have been too much, but I think at the end (against Uzbekistan) it has done good things. I’m ready to go.

Q: What do you think, the team struggled to penetrate the Uzbeks and fight through. What do you think its gonna take for team Aussie to find that extra finish? Mathew Leckie: Look, I obviously, in the first half, I was on the bench. What I saw (against Uzbekistan) was really good. Obviously the chance to recorrect it wasn’t a huge amount, but it’s never easy. Hit the edge of the box and defend, they tried to get forward and play out some of the other teams. As soon as they lost the ball, eleven of their (Uzbekistan) players sprinted back.
It’s never easy. I think if you look over the whole tournament (2019 AFC Asian Cup), every team is struggling to score goals because of the weaker sides are doing these sorts of tactics, but we still credit our chances on the day that we scored on the 90th minute (against Syria).
We just need to stay positive and more than anything, patient because, becoming patient and then out of nowhere you see the goal and you’re out of the tournament. We’ve done really well to stay patient and limit the opposition to any chances.
It’s a strong mentality from our players when we have the ball once we lose it to be right on the opposition to get it back. I don’t know how it looks from the outside for you guys (media), but for me, it’s been a positive way of playing so far. We just need to continue doing that.

Q: Could you tell us the feeling in the dressing room? Is there a set of expectations on you guys (Australia) to do what you did back in 2015 (being crowned AFC Asian Cup champions)? Mathew Leckie: Yes, for sure. The expectation is to go all the way. We’re not here to just participate, we are one of the strongest teams in Asia. We have proved that in the last few years, and I think the way we’ve played the game so far, although we lost to Jordan, we’ve dominated the games so far.
I think any team that comes us against us is scared or worried about how to come up against us. Were definitely on the strong side on this tournament (2019 AFC Asian Cup) and we definitely go out with that aggression as well.
We will never change the way we play just now because we’re playing against the UAE, which is the home nation (for the 2019 AFC Asian Cup). We’ve still got to play our style and we want to have all the ball and credit our chances, limit them to a few chances. With the right mindset and mentality, we will do that. I’m very confident of that.

Q: You’ve lost some players due to suspension, how do you deal with that tomorrow (against United Arab Emirates)? Mathew Leckie: Tom [Rogic] is an important player, obviously. We’ve got a good depth of players. I’m sure whoever will play tomorrow (against United Arab Emirates) will do a good job. We’re confident in all 23 players we have.
They (the two players that replaced Rogic while he was injured) have been very good. They came to the tournament (2019 AFC Asian Cup) with one expectation. They have gone out with full confidence. They are really important for us to get us where we are now. It’s exciting to have these boys here, and hopefully, they can be strong for the team in the future. The depth we have in our squad. We’re confident in the boys we have here. We’re confident that we will get the job done.