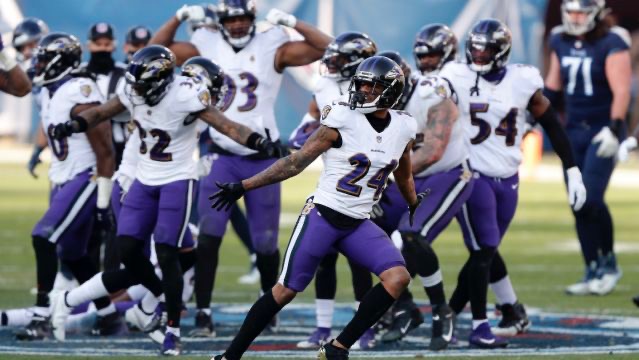 Lamar Jackson and the Baltimore Ravens saw their season end 364 days ago when they lost to the Tennessee Titans in the divisional playoff.  This year they got to return the favor as they beat the Titans 20-13 at Nissan Stadium.  The location is key as the home team has never won in this storied rivalry.

Returning league MVP Lamar Jackson has had two first round exits in his time as a Raven but he would not be denied today.  Jackson entered the game 0-6 when trailing by 10 at any point in the game and the analyst would not let viewers forget; they made several references to the stat when the Titans held a 10-0 lead in the first quarter.  17 unanswered points later and the narrative shifted.  Aside from A.J. Brown’s 10-yard touchdown reception, the Titans would not make it back into the end zone.  Human Mack truck Derrick Henry was limited to only 40 yards on 18 carries and the Titans could only muster a late game field goal to round out their scoring for the day.

Jackson scrambled, yes scrambled, for a 48 yard touchdown and Justin Tucker added a field goal to tie the game at 10 going into halftime.  After the break, the Ravens defense held the Titans to just 90 net yards in the second half and ended the dominating performance with an interception by Marcus Peters with less than two minutes remaining in the game.  Tannehill finished 18 of 26 for 165 yards, one touchdown, and one interception while A.J. Brown led the Tennessee receivers with six catches for 83 yards.  Ravens running back J.K. Dobbins scored the only touchdown of the second half when he rushed into the end zone from 4 yards out in the third quarter.  Jackson led the Ravens rushing attack, picking up 136 yards on sixteen carries while Dobbins added 43 yards on nine carries.  Marquise “Hollywood” Brown led all Baltimore receivers with seven catches for 109 yards.  In addition to his ground attack, Jackson finished 17 of 24 for 179 yards and one interception.

Baltimore will face either the Buffalo Bills or the Kansas City Chiefs in the divisional round next week.  The opponent will be determined following the Cleveland-Pittsburgh matchup Sunday night.