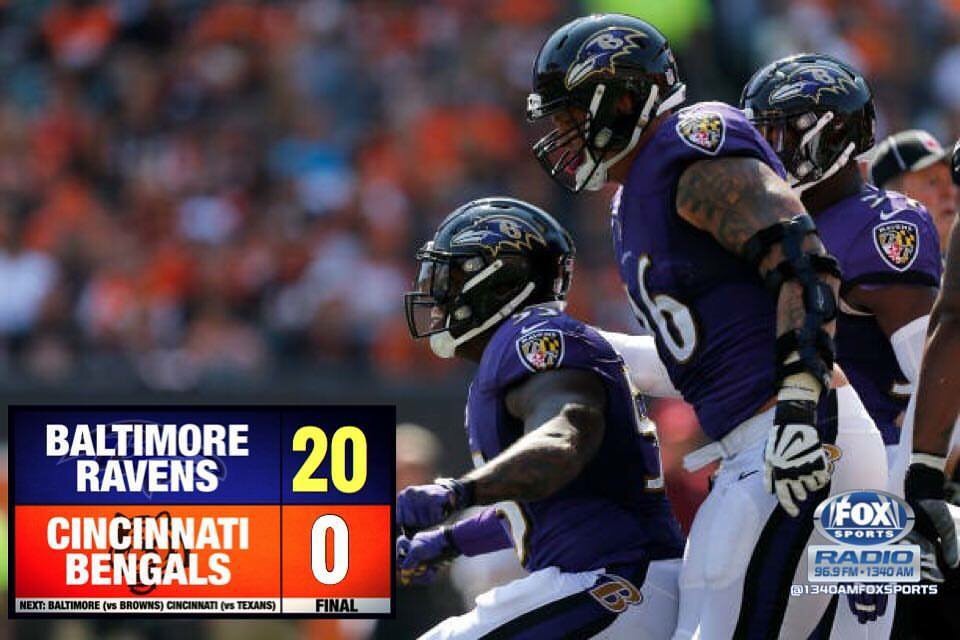 The Baltimore Ravens (0-0) and Cincinnati Bengals (0-0) looked to catch their first win of the season, in what many thought would be a hotly contested game.

CINCINNATI, Oh. — The Bengals would start the game with the ball, but Baltimore’s defense immediately made their presence known. They forced the Bengals to punt, after just allowing one first down on a Jeremy Hill run. Za’Darius Smith pummeled Andy Dalton.

Baltimore would get the ball back on the 36-yard line and score on a Justin Tucker field goal. The drive looked promising when Joe Flacco consistently hit his running back Danny Woodhead. However, Woodhead would re-injure his hamstring during the drive, the same hamstring that he injured during the preseason.

On the ensuing Bengals drive, Dalton would throw an interception when Ravens linebacker Patrick Onwuasor tipped a pass that was intended for wide receiver A.J. Green and cornerback Brandon Carr was able to corral it. With that pick, Baltimore would start the drive on their own 47-yard line, but couldn’t score.

Cincinnati would start their drive on their own nine-yard line. Smith was injured on first down and carted to the locker room with a knee sprain. He would not return. Cincinnati running back Giovani Bernard had a facemask penalty, but the Bengals would drive down the field. Luckily for Baltimore, the Ravens defense continued to make place.

In the redzone and on third-and-seven, C.J. Mosley intercept Dalton in the endzone. Baltimore would start with the ball on the 26-yard line, but had a three-and-out after a Flacco incompletion, a four-yard run and a sack. The Bengals would get the ball back and had their own struggles pushing the football forward.

Baltimore started with the ball on their own 24-yard line. This drive was the type of drive that the Ravens would like to see consistently. Terrance West would rush for a first down on second down. Despite tight end Nick Boyle being called for holding on first down, Baltimore was able to rally with a nine-yard reception from Mike Wallace on second down. On third down, Flacco finds Jeremy Maclin for a 48-yard touchdown. Baltimore’s lead was now 10-0.

The Ravens would get the ball back almost immediately on a tipped pass by Terrell Suggs that was intercepted by Lardarius Webb. On the next play, West plunged into the endzone on a two-yard run to put Baltimore’s lead at 17-0. Baltimore would hold that same score going into halftime.

Starting in the second half, Baltimore received the ball. West would bobble a pass that would be picked off by Nick Vigil. The Bengals couldn’t capitalize because Dalton would be strip sacked by none other than Suggs. Michael Pierce recovered the fumble.

Baltimore would put together an extremely long drive that was a show a force by their run game. West rushed for seven yards, two yards and another seven yards in the beginning of the drive. With Andrew Billings’ unsportsmanlike conduct penalty, the Ravens had another first down. Javorius Allen would spell West at running back on the first two downs, rushing for six and three yards respectively. West returned to get the first down and would rush for a two-yard gain in the next set of downs. Allen would come back in for a four-yard gain and a six-yard gain, converting the first down. Baltimore’s drive would end in a field goal, putting them up 20-0.

They would be able to hold that lead for the win, resulting in their first victory in Cincinnati since January 1, 2012.

John Harbaugh on his defense pitching a shutout:

I just think we were on point. That’s an offense that presents you with a lot of problems. They move guys around, put them in different spots. They’ve got different playmakers that do different things for them. They do a good job of hiding those things and getting in position to have matchup problems where they want. We didn’t really allow too much of that to happen and I think that’s a real credit to our guys.

Harbaugh on running the ball:

Well, we wanted to, but I’ll say this, you’ve got to do whatever you have to do to win the game. The fact that we were able to crack them a little bit and hit a few runs, I thought was important for us. I don’t know what we ran for or what the numbers were or anything like that, but I know we’re going to get better at everything we do, and every game is going to be played out a little bit differently, but this was a game that running the ball turned out to be a key to. I thought we were really patient with it. I thought we called it really well. I thought we blocked it really well and our guys ran it really well. Joe (Flacco) was a big part of that as well, in terms of organizing it. It was a good day that way.

Flacco on his defense picking up the slack:

Suggs on the need for the defense to improve:

No. We did some good things today, but we’re still a little (ticked) off about the bad things that happened. Me personally, I (messed) up on a particular play that almost cost us. By the grace of god, we had 10 other Ravens on the field and it didn’t cost us. I’m talking about the one to A.J. Green — that’s my guy. It’s a good place to start, but you can’t be satisfied. I’m in Year 15 (of my career), and I’ve seen it all, with all kinds of starts and all kinds of finishes. It’s good to take one. We’re going to enjoy it right now. It felt good.