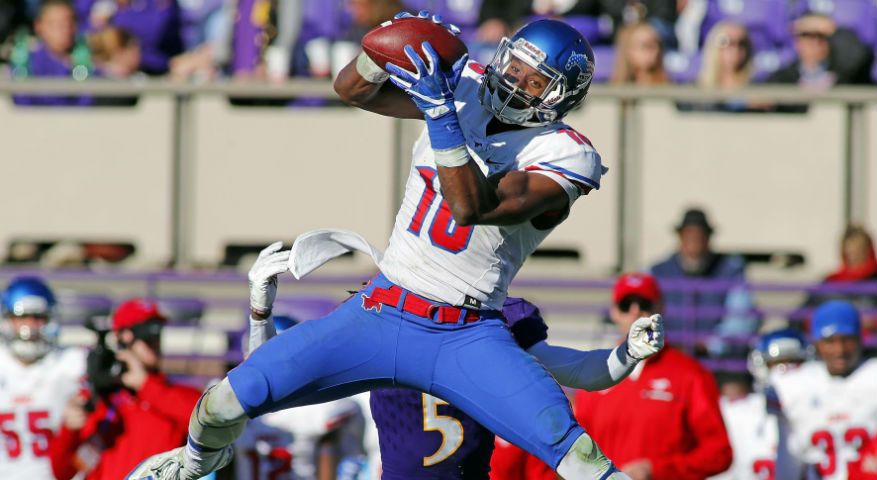 The Baltimore Ravens are in the thick of the playoff hunt, with just three weeks left in the regular season.

However, it is evident that they are a team with plenty of holes to fill, some more glaring than others. This process starts with the draft, something that hasn’t been too kind to the Ravens as of late. There is going to be great deal of pressure on the shoulders of general manager Ozzie Newsome and the rest of the front office to produce in the upcoming draft. Here are five players the Ravens could target in the 2018 NFL Draft.

Courtland Sutton is not a name that is known by the casual football fan, but he has the look of the next great NFL receiver. This season, Sutton caught 62 passes for 1,017 and 12 touchdowns. Talk about domination. You could make the case that the level of competition that SMU played this year wasn’t all that great, but he played the teams on his schedule and shined bright. He’s a big-bodied receiver with sure hands, something that the Ravens have been lacking since Anquan Boldin left. He’s far from a speedy guy, but he’s a reliable target, something Breshad Perriman has not been.

Another area of concern for Baltimore is the defensive front, most notably on the edge. While their unit isn’t terrible, they could certainly use an upgrade. Terrell Suggs is still good, but is on the back end of his career. There are a few young pieces in place, but Ferrell’s ability would make him a much-welcomed addition. He stands about 6-foot-5 and 260 pounds, so he definitely passes the eye test. He can play both inside and out, but rushing the edge is where he excels most. His length gives him a distinct advantage over the guys blocking him, or trying to at least. He’d be pretty tough to pass up on.

There are some experts who believe Calvin Ridley is the best wide receiver in this upcoming draft class, and they may not be wrong. He possesses probably the best combination of size and speed of any wideout in the draft. Ridley is a big-time playmaker, as evidenced by his 18 total touchdowns in three seasons at Alabama. He’s a polished route-runner and doesn’t have a problem with drops, something that stands out about him. Once again, adding a player like Ridley to this Ravens offense gives Joe Flacco a dependable weapon, which has been few and far between this season.

The Ravens are in dire need of some talent on their offensive line. Throughout the season, this unit has gotten exposed when faced with a decent defense. So, if they want to take the next step as an offense, they are going to have to do a better job keeping Flacco upright. At just 20 years old, Williams is a very young and raw prospect, but he is an NFL star in the making. He was the gold standard for pass protection in college football this season, allowing just one sack and four total quarterback pressures. His footwork is impeccable and his tenacity separates him from other players at the position. This would be a great fit for Baltimore.

At this point, it’s safe to say wide receiver is a position of need for the Ravens. There are really no consistent playmakers on this offensive unit, so the front office needs to go out and find some. Christian Kirk is a legitimate option to fill that void. Kirk isn’t even 6-foot tall, but he is a pure athlete. You could honestly make a case that he’s the most explosive player in the entire country. Kirk has world-class speed and is lethal with the ball in his hands. If he lands in Baltimore, he’s the type of player you want to get the ball to by any means necessary.