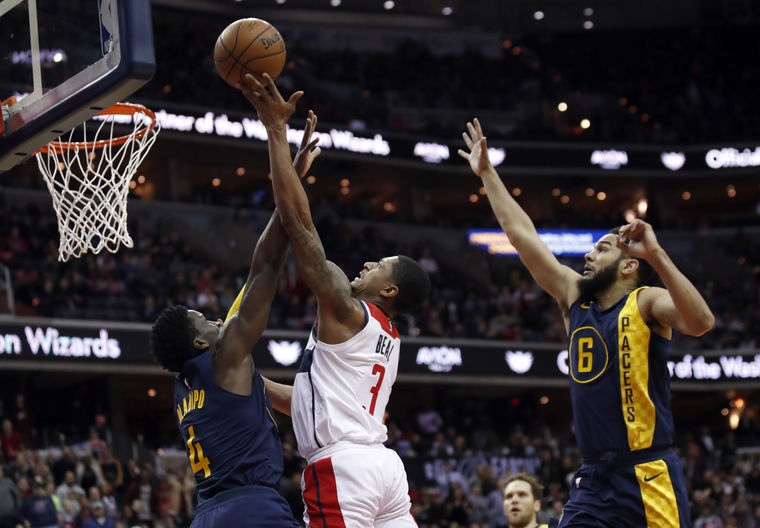 WASHINGTON- Prior to Sunday’s matchup against the Indiana Pacers, the Washington Wizards were blessed not to see Victor Oladipo in their first matchup in February. But on Sunday, the Wizards quickly received a reality check with Victor back in the lineup for the Pacers scoring 33 points.

The Wizards were without “Wave Papi” Kelly Oubre, who was a late scratch with a sore left foot, that meant that Jodie Meeks and Mike Scott would receive more responsibility coming off of the bench.

The turning moment in this game for the Wizards was in the final two minutes. Mike Scott and Jodie Meeks saw a lot of playing time during the final stretch and Coach Brooks attributed that to the momentum of the game.

With 1:36 remaining, Otto Porter Jr., hit a 28-foot three pointer off of an assist from Mike Scott to snap Indiana’s lead down to three points. Immediately after that, Otto stole the ball from Victor Oladipo only for Washington to give the ball right back to Indiana for a missed alley oop layup by Pacers’ Thaddeus Young.

Bradley Beal eventually went to the line for two free throws with 36 seconds remaining. He made both free throws, changing the entire dynamic of the game to 96-95 with Indiana ahead by one.

After a Wizards timeout with 10 seconds remaining, Bradley missed a driving floating jump shot that could have tied the game at 97.

But it wasn’t over yet.

The Wizards had the ball with five seconds remaining in the leading scorer’s hands and were down by three. With 15,000+ jaws dropped in awe at Capital One Arena,  Bradley missed a 27-foot three point jumper that would’ve tied the game.

In the postgame when asked if fatigue was a factor going into the stretch, Beal said: “It’s no excuse, you have to hit those shots it’s just plain and simple. I was terrible, can’t half ass carry a team, you gotta go all out and I gotta make those shots.”

Those final two chances with the ball in the hands of Beal were pivotal for the leading scorer who played 42 minutes on Sunday night and had a career high of 11 assists.

When I asked him about his thought process going down the stretch, Bradley said,  “We knew we had the momentum and I felt like I had a great shot in the paint, guy kind of clipped me a little bit but I still should have made that shot. Then I had another opportunity for a three at the end of the game and they ran out, such an easy pump fake, just a three I should have just hit plain and simple.”

The Wizards are now 1.5 games behind the Pacers who have taken the fourth seed in the Eastern Conference. They’ll meet again on St.Patrick’s Day where the head to head tiebreaker will be up for grabs for homecourt advantage in the playoffs.

Washington will face Miami on Tuesday, another tough game for this Wizards team who have lost three straight and are in need of a momentum changer heading into the thick of March.