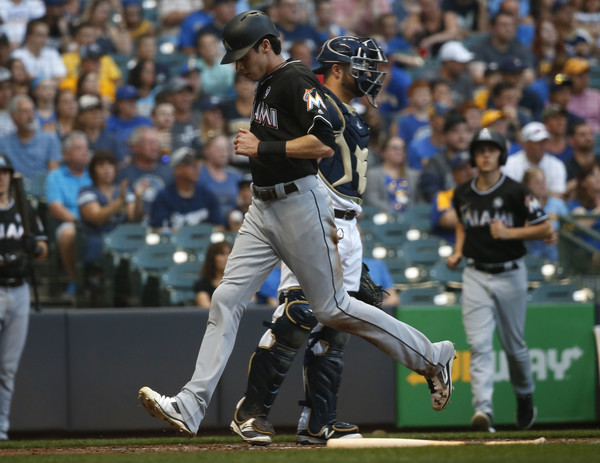 The stove is officially hot again folks. The Miami Marlins are continuing their firesale and have shipped star outfielder Christian Yelich to the Milwaukee Brewers in return for a package headlined by baseball’s seventh overall prospect Lewis Brinson.

The Brewers are looking to build off the success of a surprise 86-win campaign in 2017, and Yelich gives them a middle of the order threat to pair with Eric Thames, Travis Shaw and Ryan Braun.

After missing the Wild Card by a single game last season the Brewers have now jumped square into the conversation of supplanting the Chicago Cubs for the division crown.

Yelich is bringing legitimate 20/20 talent to Milwaukee along with Gold Glove caliber defense and is under team control through 2022. At just 26-years-old Yelich is also a young building block that the Brewers can continue their build around.

For the Marlins this continues their efforts to trim payroll below $100 million, and Yelich is just the latest piece to go in Derek Jeter‘s firesale joining Marcell Ozuna, Dee Gordon and Giancarlo Stanton as players to find new homes. The Marlins get one of baseball’s best young talents in Brinson, a centerfielder with a developing power tool Brinson could be a 30/30 threat if he hits his ceiling. Miami also received a package of three other prospects from Milwaukee, all young players with high upside who could one day start for Miami.

The trade of Yelich leaves catcher JT Realmuto as one of the last valuable assets on the Marlins, and it should be expected to see him shipped elsewhere in the coming days. For the Brewers they are now official playoff contenders and will be an interesting team to watch as the NL Central may be one of the most competitive in baseball with the Cubs, Brewers and St. Louis Cardinals all battling for the crown.