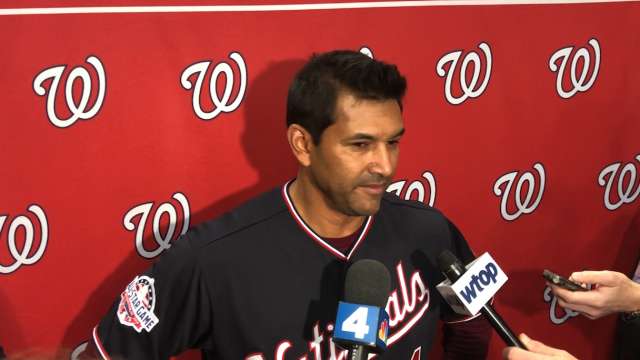 Nothing gets a group of people more acquainted than having fun. That’s exactly what is happening during spring training with the Washington Nationals and manager Dave Martinez.

“Y’all are in for a treat. He’s a great guy, he’s really easy to talk to…Good to be around, good energy,” Brian Goodwin told the media about his manager.

After losing Dusty Baker, there were plenty of questions for fans, and rightly so. He led the team to back to back playoff seasons and became a hometown favorite in the process. So, the question remained, “What can this new guy bring that Dusty couldn’t?” Besides putting an emphasis on strong base-running and bringing a more analytical approach to the game, he seems like quite the fun guy. Nearly each day, before batting practice and drills, there’s a new development. A fun one.

Camels. Literal camels at the spring training facility on a Wednesday, which is hump day, to get over the proverbial hump (NLDS). It took the internet my storm and showed Davey’s sense of humor, but most importantly the fact that he can pull a strings to make camels pop up in Florida!

It’s easy to think this might be a publicity stunt, but once you look at the scouting report you can start to see how these guys are going to improve our club. ??? pic.twitter.com/HkIFYsFO0Y

An additional matter that has been added to the team routine is a circle of trust. No media, microphones, or cameras, just the team. This is pertinent in building a working relationship between player and player, also coach and player. A few thoughts on Davey and the circle of trust from the players:

“He’s very relaxed, good energy I think that’s the most important for spring training, it can get very routine and everyone gets tired right away but he’s mixing it up.” – Brandon Kintzler

“It’s fun so far, Bobby Henley does a good job of keeping it light, but it’s a good way to check in with everybody each day and get ready for the day.” – Matt Wieters

The latest development in the new fun house was a Friday morning chipping game; though the hole was 110+ yards away which is a wedge shot, but who’s counting. The players took turns hitting the ball over which was, according the Nationals insider Chelsea Janes, a bullpen and three fences. Joe Ross, the last one to go for team Scherzer, won it all for his respective team.

Joe Ross was the extra man for team Scherzer, with a chance to win it… one horn for one point, two for the next closest circle, three for a bullseye… pic.twitter.com/9GCYJasqpy

From interviews and videos via social media, it is evident that everyone is taking a liking to Davey and his unorthodox ways. For someone who was a skeptic at first I am coming around, and not solely based on his rather entertaining tactics but seeing what he can bring to the game. The players are excited, the fans are exciting, and everything seems to be lining up for another successful season. The only thing left to do is keep having fun.