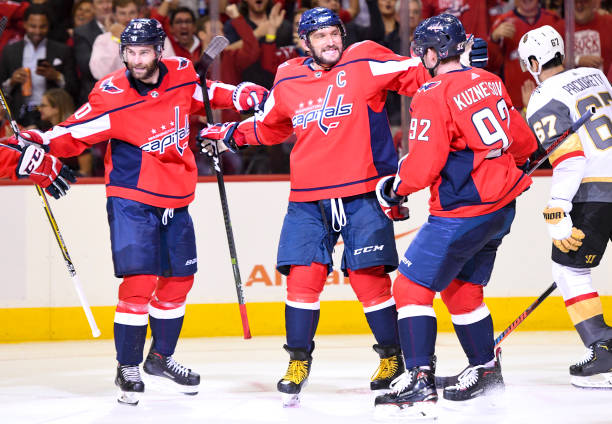 Despite winning the Cup in five games this past June, the Capitals had never beaten the Vegas Golden Knights in the regular season before Wednesday night. First line center Evgeny Kuznetsov had a heavy hand in changing that this time around.

Playing in a less than full Capital One Arena, the home team took about 15 minutes to completely get their skates underneath them after a five day lay-off. It was at that point of the first period that Brooks Orpik took a hit from William Carrier of the Golden Knights that had him on the ice behind the net before making it to the bench under his own power. Orpik returned at the beginning of the second period.

No penalty was given on the play and the Capitals followed up increasing their intensity in the final five minutes of the first period.

A Tomas Nosek holding call against Lars Eller led to Washington’s second power play opportunity of the night; one that Evgeny Kuznetsov cashed in on to extend his point streak to three games. John Carlson and Nicklas Backstrom were credited with assists on the PP goal.

The Capitals upped the physicality in the second period; out-hitting Vegas in the period by a margin of 17-5. The intensity led to a 2 vs 1 breakaway with 9:42 remaining in the period in which Alex Ovechkin scored his third goal of the season on a cross-ice pass from Kuznetsov.

Following the trend of increased scoring in every period throughout the evening, Washington and Vegas traded scoring opportunities back and forth in the final stanza.

Center Nicklas Backstrom had already tallied four assists in the early season before earning his fifth earlier in the night. He finally scored his first goal of the season with 14:52 left in regulation on a power play via an Erik Haula tripping call. Carlson and Kuznetsov both earned their second assists of the night on what proved to be the game-winning goal.

Vegas’ Reilly Smith continued his trend from June of scoring on Braden Holtby cutting the lead to 3-2 just two minutes after Backstrom’s goal.

It wasn’t long after Smith’s goal that the Captain added an insurance policy scoring his 610th career goal to pass Bobby Hull for 17th on the NHL all-time goals list.

For a second, it appeared that Max Pacioretty had cut the Caps’ lead to one once again as he found the back of the net with just over six minutes remaining in regulation. However, after the first coach’s challenge of Todd Reirden’s young head coaching career, it was determined that Vegas was offsides on the play. After the game Reirden said the decision to challenge was pretty easy to make from the bench; it did look like a call the officials missed in real-time.

T.J. Oshie scored on an empty net with just over a minute remaining to seal a 5-2 win for the home team.

All the talk after the game was about the play of Kuznetsov; rightfully so after his 4-point performance on the night, earning the first star of the night.

The Capitals’ back-to-back theme will continue as the travel to New Jersey to face the Devils Thursday night before returning home to face the Toronto Maple Leafs Saturday night.